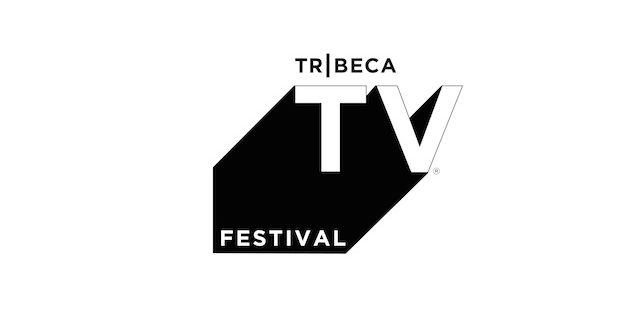 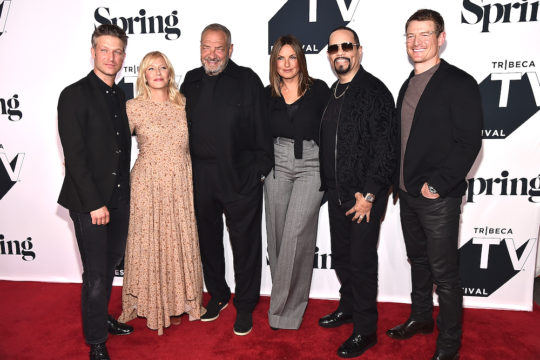 She learned how important talking about these issues are for society.

“It’s a topic that has been swept under the carpet and has brought the victims so much shame, to bring these stories to the water cooler has been a privilege and a gift,”

Ice T laughed saying “Dick called me and asked me to do four episodes… now it’s been twenty years.” 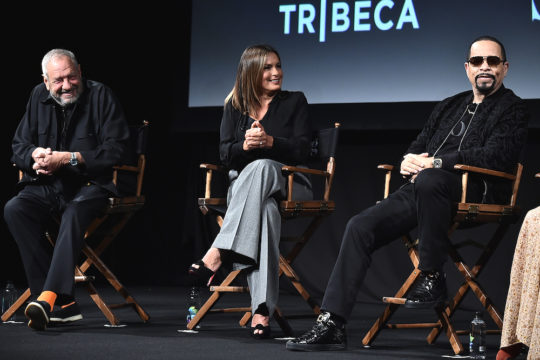 When speaking about the impact the show has had over the years, Mariska touched on how Law & Order: SVU is the ideal version of how sexual assault victims should be received in the world. 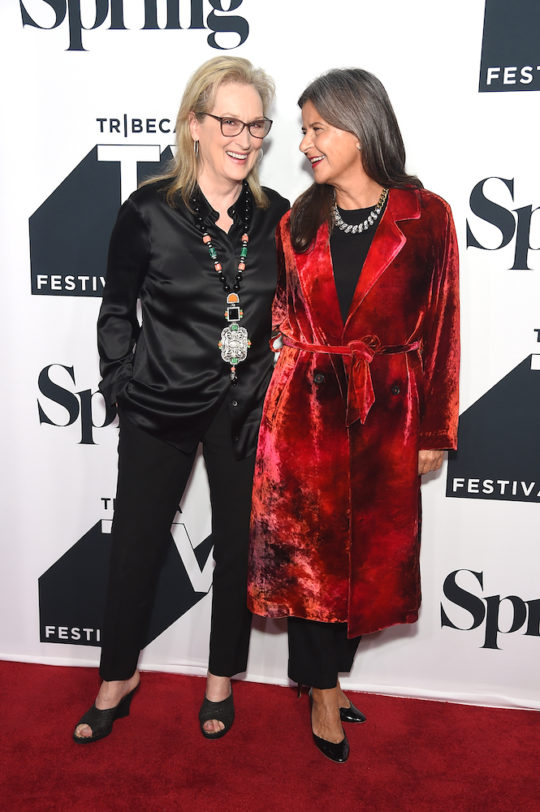 The cast of Sony Crackle’s StartUp, including Adam Brody, Edi Gathegi, Mira Sorvino, and Ron Perlman, reunited on the red carpet as well. 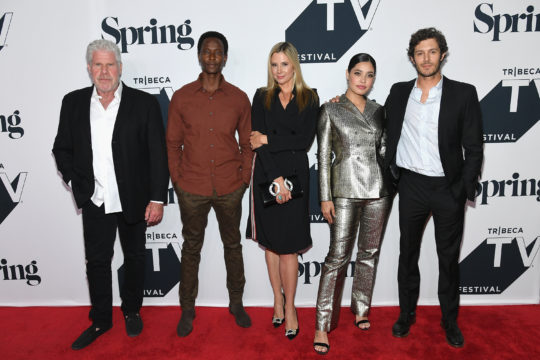 “It can’t just be boundless; there have to be some regulations, safe guards, something because it has too big of a reach.”

Ron Perlman followed with, “we can’t even figure out if the Supreme Court nominee is a scumbag because of the false information we’re getting. If we can’t answer that how can I answer your question.” The audience laughed in response. 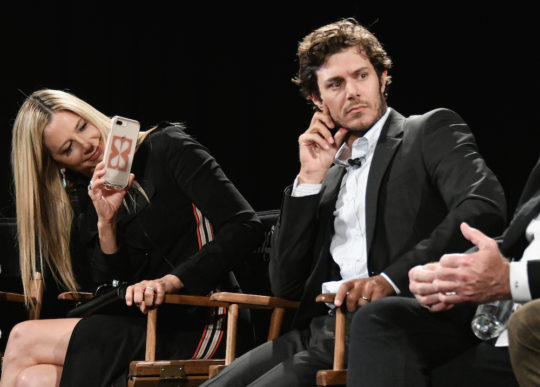 As Mira Sorvino snapped pictures on her phone of her fellow castmates on stage, Ron Perlman said he’s not a very tech savvy person. After Otmara Marrero joked that she uses iOS5, Ron said, “I don’t even know what an iOS is.”

Day three of the 2018 Tribeca TV Festival was a celebration of the mind, spirit, and heart at Spring Studios in New York City.

Bryan Cranston gave us thought and insight into the creation of an iconic character, Rosario Dawson and Laverne Cox lifted us with their resilient joy.

Breaking Bad star Bryan Cranston sat down with the chief film critic for New York Magazine, David Edelstein, to discuss his illustrious career as one of the most versatile performers over the last three decades. In a special conversation presented with TUMI, Laverne Cox sat down with Rosario Dawson to discuss Dawson’s prolific career which has taken her from a film and television performer, to a comic book writer, producer, singer, and activist.

New York Magazine’s David Edelstein began the conversation by asking Bryan Cranston about his acting process. “I perform for myself. I have a high plateau that I want to reach and whatever I want to do is secondary to that effort. It’s impulsive. The more I do that, the more I get off kilter from the norm. Sometimes you make mistakes, but if you follow you’ll make mistakes. You have to take risks. You’re only as good as you allow yourself to be bad. You have to be willing to take those chances – physically and emotionally. When you go through a process like that, you’re body doesn’t know the difference between acting and real life. If I put myself into an emotional position through acting, your body doesn’t know. It can be exhausting but also exhilarating,” says Cranston. 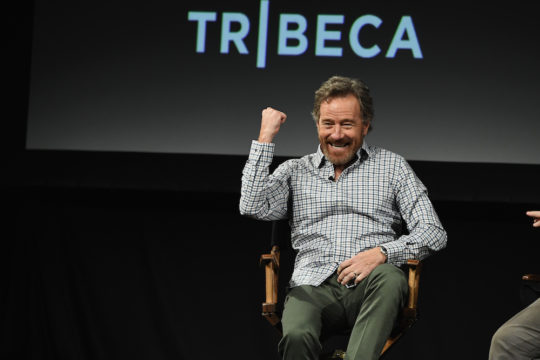 Cranston spoke about his plan to join the LAPD post college and how that changed entirely. In his second year at school, Cranston took an acting class. He received the script from the teacher and the first direction was “a couple is making out”. “I was standing next to a very attractive woman and I thought I better make myself more presentable. I felt like one of those birds in Nat Geo – check out my plumage. But then she read that opening line, and looked up to see me and cocked her head and smiled. And I was like YES. That was victory to me.” Edelstein said, “So your entire career was made in that millisecond?” “IT WAS!,” Cranston said loudly.

Tribeca Talks: The Journey Inspired by TUMI – A Special Conversation with Rosario Dawson 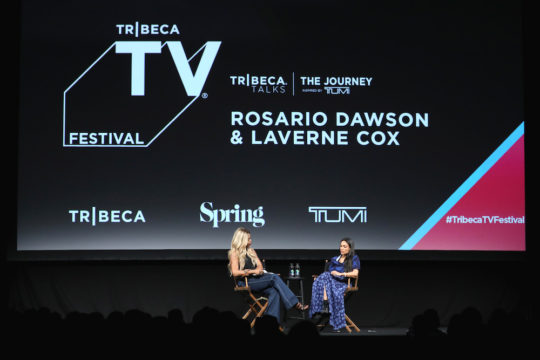 Laverne Cox opened the conversation by telling Rosario Dawson how proud she is of her and “all the fierceness and courage you’re bringing into the world. You are an incredible person and I’m SO happy to be doing this with you.” Rosario teared up and the audience applauded. “Your Mom is here, you have a fierce Mom,” Laverne said as the crowd applauded. “You grew up on the Lower East Side. What was it – was it your upbringing, your Mom – that made you want to live an activist life?” Laverne asked. Rosario replied with, “Growing up on the Lower East Side during the AIDS crisis, housing epidemic – before we had cell phones and social media and could bring awareness to things. It just opened my eyes so much. I was discovered on my stoop – they asked me if I wanted to be in a movie.”

“Did kids inspire you to act or did you always want to act?” Laverne asked.

“I always wanted to go to college and get a great job – but when that opportunity came, I knew everyone I knew would kill for that chance and I had to take it and run with it at a young age. And thankfully, 24 years later, I’m still doing it and able to provide for my family,” Rosario said as the audience applauded greatly. 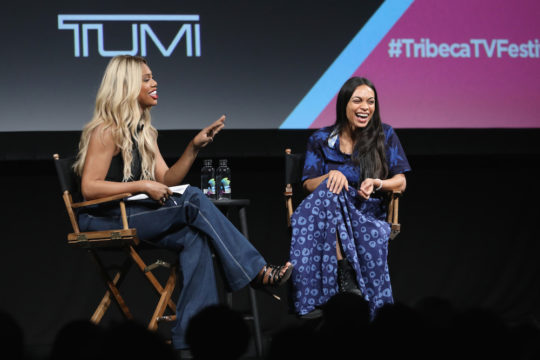 Moving into specific TV Festival topics, Laverne asked “what inspired you to step into the Marvel genre?” Rosario replied with,

“I’ve always loved Star Trek. I marveled over a future that was based on exploration and not this hamster wheel we are on now. I loved the street level fighters – not these typical superheroes, I really liked that. I loved the idea of championing the human.”

Laverne continued and asked “There’s a moment in Luke Cage where he punches the wall and the whole convo is about men, masculinity, race. What’re your thoughts about playing that scene with everything going on in the world, masculinity, femininity?”

Rosario said, “I feel really grateful because it was looking like it was going to be a final scene for Claire – the way it was originally written was a little more his side. And I approached the writer and said you know I think we should add this in and give a bit more of Claire’s perspective. He gave me an amazing compliment and asked if I wanted to join the writer’s room!”

After the event, everyone in the audience received a Tumi giftbag.

A private cocktail reception was held on the rooftop of Spring Studios where YRB spoke to Heather Gorman, the VP of Marketing and Global Support at Tumi , about the company’s partnership with the Tribeca Film Festival. “The Renaissance Woman is going through so many different modes in a day and our bags are there as an ally. We tried to think of who could represent all of these women and their journeys and Rosario Dawson does it all. She is a representation of all these women who are pushing themselves and being excited about the opportunities that are coming tomorrow and being ready for it.” 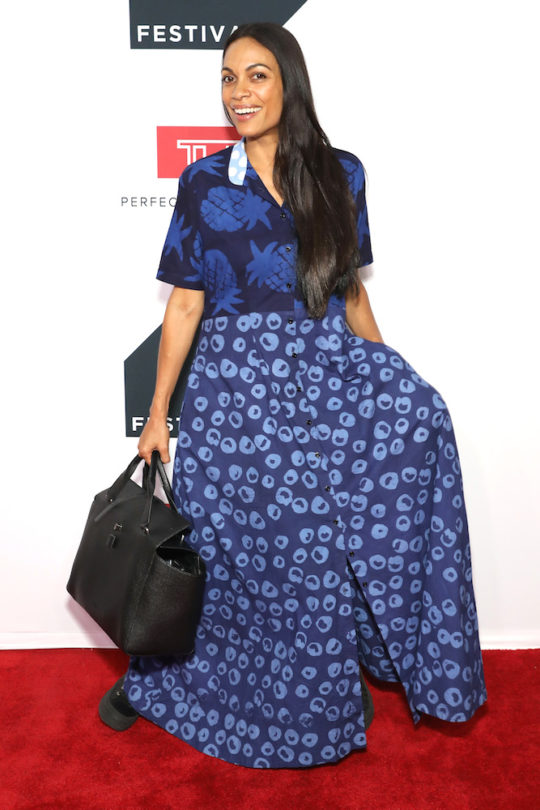 Rosario then signed a copy of her 2002 cover of YRB Magazine. 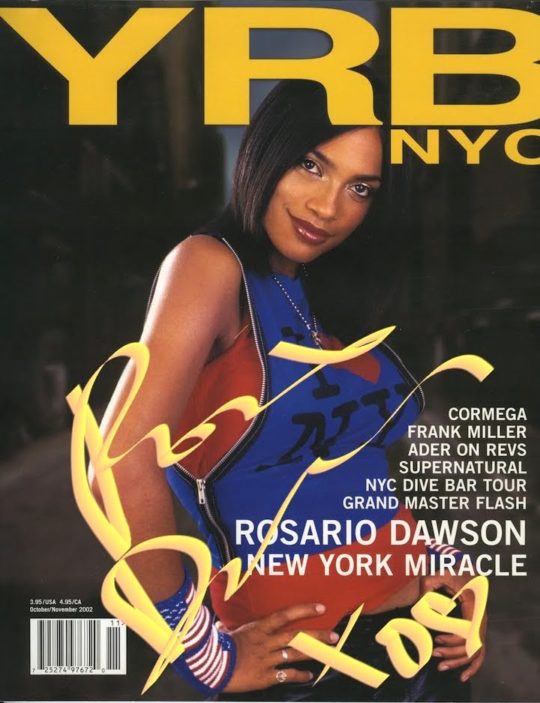 The next day, Tribeca brought the Sharks from ABC’s Shark Tank, including Marc Cuban, Lori Greiner, Daymond John, Barbara Corcoran, to New York to celebrate the 10th season and a momentous 200 episodes of the show.

Tribeca Talks: Ten Years of Shark Tank
When asked about the audition process and what it is like. Kevin O’Leary said, “They told me they were looking for an asshole – I said I’m your man!” You can’t fake it on Shark Tank – you’re just reacting to the entrepreneur, it’s all real that’s the magic.” Barbara Corcoran added, “I had a very intense audition process. They asked me to send in my financial statement. I did and they said you’re in!” The audience laughed. 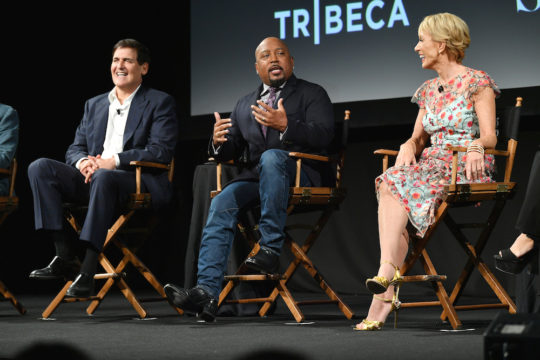 “What are some of your favorite moments from the show now going into the 10th Season and 200th episode?” Lori Greiner said, “The squirrel zapper! He zapped us instead of the squirrel.” Damon John added, “The guys with the big tongue who came in and licked the cat… and Robert licked the cat!” Mark Cuban said, “When Richard Branson came on and threw the water on me.” Kevin O’Leary added, “Potato parcel – a company that puts your face on a potato and sends it to you.”

When asked, “What matters more the product or the person?” Barbara said, “I know I like them based on the way they look. If I don’t like the way they look, I’m out.” Mark added, “Barbara has really good instincts about people so I always watch for her opinion on someone.”

Asked, “How do you choose what makes it on air?” There are three things they look for, “stakes, personality/charisma, and a ‘wow’ idea. There has to be something different.”

“We had a few people come on this season that said I grew up watching the show and now they’re in the show – that was really cool to see,” said Lori. 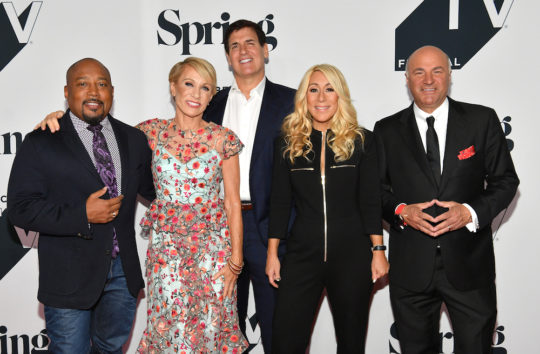 When asked if there will ever be an all-female panel of Sharks Lori said, “I believe in all gender equality – it should be 50/50. In the home, at work, it should be that we all share the duties and we all get the jobs equally,” Lori stated. Barbara jumped in adding, “In my home I do 95% of the work, so the panel should be 95% female and we can get even!” The audience laughed. Kevin added, “I will say that most of the better companies I’ve invested in and have a better return, are run by women.”

“I think the show is the perfect example of the American dream,”added Kevin.

Ray Donovan Season 6 Premiere
A main theme of the panel discussion was the show’s move to New York in its sixth season after shooting for five years in Los Angeles. When asked what it was like shooting in New York, star Liev Schreiber said effusively, “It‘s great. This is my hometown. I’m from here.” He continued, “I’ve been shooting in NY my whole life but it was so different doing it as Ray.”

Star Jon Voight, who arrived on the red carpet was nostalgic for him to film in New York. 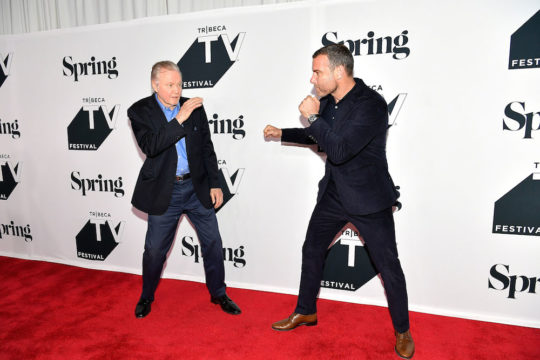 Explaining that he grew up in Yonkers, “We were shooting a scene this season in Yonkers and someone came up to me and said, ‘you know, you’re seven minutes from the house you grew in.”

Coincidentally, an audience member’s family now owns the same house and during the audience Q&A she said to Jon, “every time you come on screen, my husband yells, ‘Yonkers in the house!’”

Continuing to wax poetic about Yonkers, Jon explained how he loves the hills of Yonkers and went on to sing a few lines of a newly made up lullaby about Yonkers for the audience to the tune of “The Hills Are Alive.” 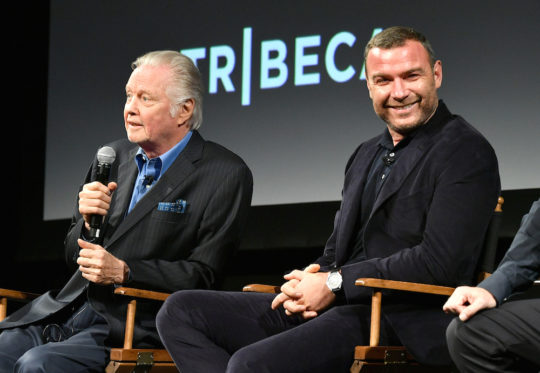 Speaking about the character of Ray, Liev said, “It’s worth bearing in mind that the character was created by a woman. Ray absorbs things. He absorbs suffering, and he protects, and he represents a certain fantasy about masculinity that in some ways is extremely attractive to men and women. At the same time, it is an infantilized version of a human being dealing with pain and abuse. I think that’s something that all of us relate to on a very primal level. Men and women”