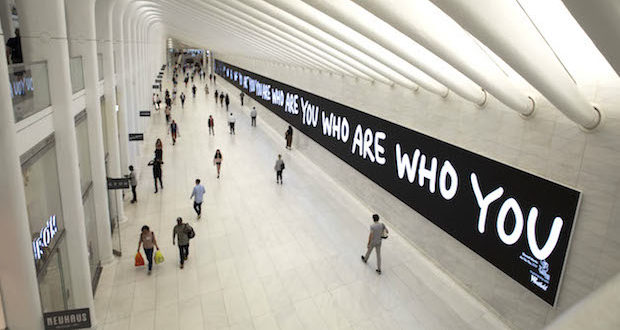 Unibail-Rodamco-Westfield and Art Production Fund (APF) are pleased to announce the third installment of their 2019 video art program. 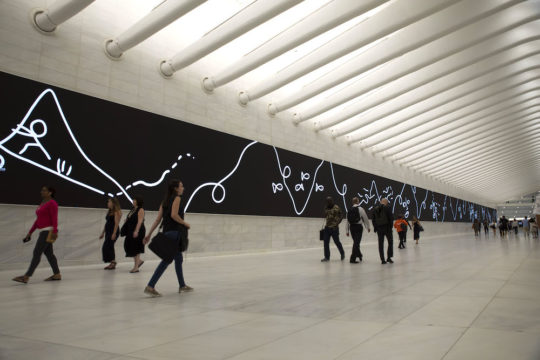 Starting September 13, 2019 a new site-specific work from artist Shantell Martin will be displayed across all of the large-scale screens at Westfield World Trade Center, New York, NY and Westfield Century City, Los Angeles, CA until October 11, 2019. 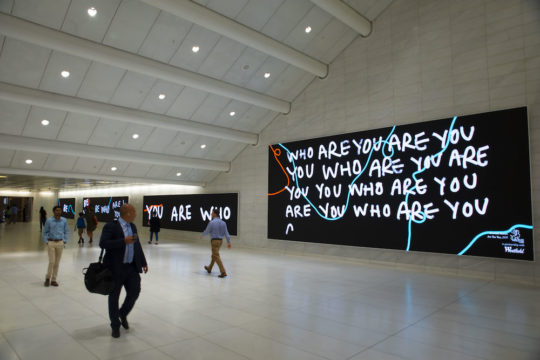 This new work by Martin was created specifically for the Westfield screens and explores some of the questions and repetitions we find ourselves asking: Are you being you? Are you being true? Who are you? Are you YOU? Permutations of the same questions are repeated throughout the work and resonate in viewers in both subtle and more profound ways. 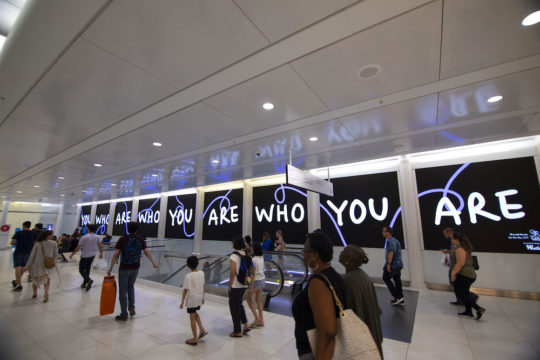 The work intentionally plants questions for viewers to reflect upon and to consider as they pass through the center whether heading to work or on their way home.

These illustrations were designed by Martin on a digital tablet and were collected and animated by collaborator Optical Animal. 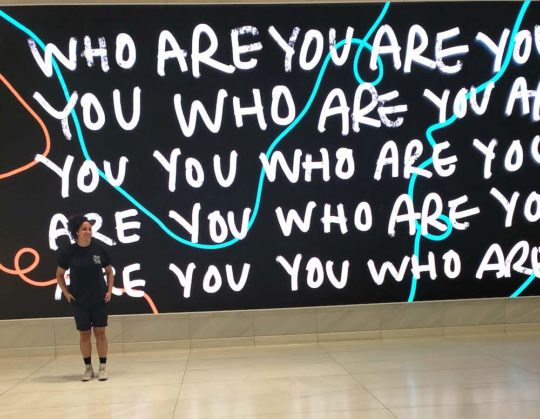 “The World Trade Center is my route home most of the time and these are thoughts I’ve had in the space often that will now be visible on the screens.”

“We are thrilled to present this new site-specific artwork by Shantell Martin on the incredibly sophisticated screens of Westfield World Trade Center and Westfield Century City. We hope the work gives viewers the opportunity to reflect and meditate on Martin’s insightful questions as they pass through the center daily.”

“The Oculus at Westfield World Trade Center as well as Westfield Century City are dynamic places to connect and experience art, culture and community. We are thrilled to introduce our guests to Shantell Martin’s artwork, prompting discovery and conversation,” 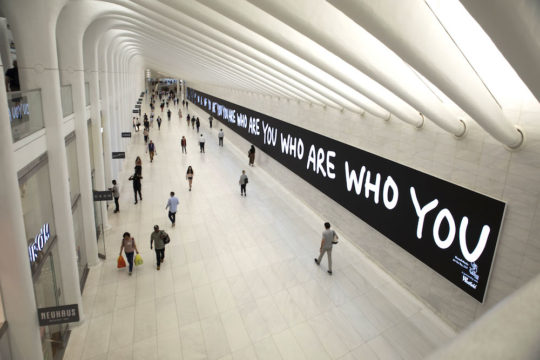 Past Westfield and Art Production Fund video art programs include; Marilyn Minter, I’m Not Much, But I’m All I Think About (February 2018), Rashaad Newsome, Icon (April 2018), Alex Prager, Face in the Crowd (September 2018), and Laurie Simmons, Drone Mess Video (February 2019), and Marco Brambilla, Nude Descending a Staircase No. 3 (May 2019).

ABOUT SHANTELL MARTIN: Below the surface of Shantell Martin’s signature black and white drawings is an artists’ inquiry into the role of artist and viewer, where a work of art is more than an object of admiration disconnected from its inception. With a meditative process defined by an uninhibited flow, her compositions embody her internal state and the impermanence of the world around her. Exploring themes such as intersectionality, identity and play, Martin is a cultural facilitator, forging new connections between fine art, education, design, philosophy and technology. In addition to prestigious solo shows at some of the most renown art institutions including the 92Y Gallery in New York City, the iconic Albright Knox gallery and the MoCADA Museum, Martin has carved a path for herself that is as much intellectual as visual artist. In late 2018, she was asked to collaborate with the prestigious New York City Ballet, where she created large scale drawings in the performance hall and foyer of the Lincoln Center for the company’s celebrated Art Series. She continues to teach as an adjunct professor at NYU Tisch ITP (Interactive Telecommunications Program), where she works with her students to push the boundaries of storytelling, visual art and technology.

ABOUT WESTFIELD WORLD TRADE CENTER: The new port of entry to Lower Manhattan, Westfield World Trade Center is located at the site where 60,000 neighborhood residents, 300,000 daily commuters, 13 subway / PATH trains, multiple ferry lines, and an additional 15 million annual global travelers converge within one landmark setting. This new New York City experience brings together commerce, community and culture in a destination integrating the Santiago Calatrava designed Oculus, street-level space in WTC Towers 3 and 4, as well as the galleries that run underground across the World Trade Center campus (including to 1 WTC, now the tallest building in the Western Hemisphere). Encompassing more than 100 fashion, lifestyle and technology brands across 365,000 square feet of space, Westfield World Trade Center is home to one of the most diverse retail collections in New York City, world-class restaurants, art, culture, events and entertainment, as well as showrooms, sponsorships, and engaging media activations for premier partners such as Ford, Pepsi and JP Morgan Chase. Westfield World Trade Center, which opened in the Summer of 2016, has unveiled a number of unique art and cultural programs, including performances and works by a variety of community arts organizations, an outdoor film screening series with Tribeca Enterprises and partnerships and programming with the New Museum, Lower Manhattan Cultural Council, the Public Art Fund, the Downtown Alliance and a number of local public and private schools. 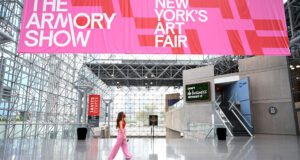