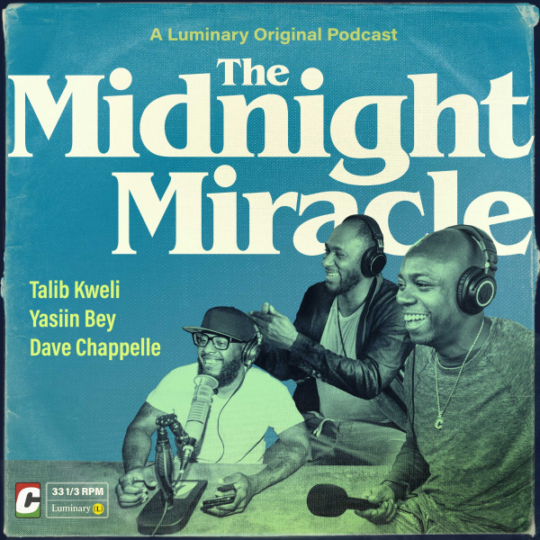 The show provides a glimpse into a very interesting season in the lives of the three hosts and their friends, and features guests from among the country’s most influential cultural icons. The show will be released in the coming weeks on Luminary and will be available on the Luminary channel on Apple Podcasts when its new subscription platform debuts worldwide later in May.

“Making a podcast isn’t the obvious next move for me, but it’s the right one. The Midnight Miracle gives you a look into how me and my friends process the world around us, and I think it will change the way listeners think of what a podcast can be,”

The Midnight Miracle was recorded during Chappelle’s legendary 2020 Summer Camp in an intimate setting at “The Shack” — a mechanic’s garage retrofitted as a clubhouse. Inside, listeners get the sense they’re sitting in on conversations among friends.

In the variety show tradition, the conversations are punctuated with sketches, impersonations, archival audio clips, and a powerful soundtrack that includes music from Charlie Parker, Dizzy Gillespie, Thelonious Monk, D’Angelo, Heatwave featuring Johnny Wilder, and much more to come. 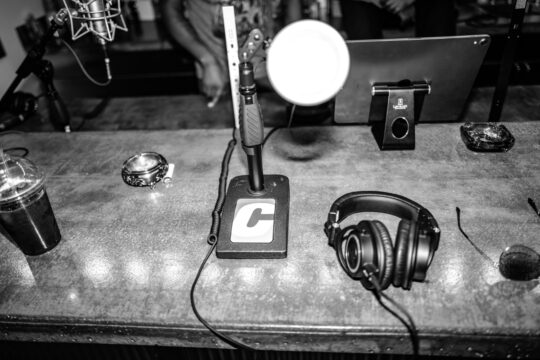 Kweli, Bey, and Chappelle meticulously edited more than 100 hours of recorded content to make The Midnight Miracle in partnership with Jamie Schefman and Noah Gersh of SALT.

A single season is planned, with new episodes starting in the coming weeks and continuing throughout the year, with a summer hiatus.

“The Midnight Miracle pushes the boundaries of podcasting, creating an audio experience listeners have never heard before. It is the exact type of project we built Luminary to support, and we are so excited to share it with listeners across the world,”

“Talib, Yasiin, and Dave each bring deep wells of perspective to The Midnight Miracle. The conversations between them and their friends are humorous and profound, and the show is edited in a truly unique fashion. We are really proud to be a home for groundbreaking audio like this,” said Mark Silverstein, Luminary Chief Content Officer.

Dave Chappelle is an American comedian, screenwriter, television and film producer, and actor. Recognized as one of the greatest comedians of all time, Chappelle was awarded the prestigious Mark Twain Prize for American Humor from the John F. Kennedy Center for the Performing Arts in 2019. Chappelle’s work in stand-up comedy, writing, producing, and acting has earned him more than 30 nominations and awards in television and film for projects that include his groundbreaking sketch comedy television series, Chappelle’s Show, guest appearances on Saturday Night Live, and his comedy specials, most recently earning his third and fourth Emmy Awards for Sticks & Stones in 2020. In audio content, Chappelle has won the Grammy Award for Best Comedy Album three years in a row, 2018 through 2020. In 2017, Netflix cited Dave Chappelle: Collection 1 as the most-viewed comedy special ever on their network.

Yasiin Bey, formerly known as Mos Def, is an American rapper, singer, actor, multimedia artist, and activist. Bey began his hip hop career in 1994 and in 1999 released his solo debut, Black on Both Sides which was #1 on the Billboard Top Rap Album chart. Since then, he has been nominated for 6 Grammy Awards for his musical performances, albums, and videos. His acting career has earned him more than 11 award nominations, including the Golden Globes, Emmys, and NAACP Image Awards. And in 2005 he won the Black Reel Best Indie Actor Award for his performance in The Woodsman.

Talib Kweli, a Brooklyn-based MC, is one of the most lyrically-gifted, socially aware, and politically insightful rappers to emerge in the last 20 years. Kweli has recorded with producer Hi-Tek as the duo Reflection Eternal, released landmark solo material, and collaborated with Kanye West, Pharrell Williams, and more. Kweli founded Javotti Media in 2011, a platform for independent thinkers and doers in music, films and books. In 2019, in partnership with UPROXX, he launched People’s Party with Talib Kweli, a podcast where he explores hip hop culture and politics with thought-provoking guests like Lamar Odom, Don Cheadle, Lil’ Kim, Dax Shepard, Jemele Hill, Ice Cube, Perry Farrell, and Michael Rapaport. And in 2021, Kweli released Vibrate Higher, a book that illuminates Kweli’s upbringing and artistic success, and discusses the power of hip hop as a political force.

SALT is an audio first media company that creates exceptional experiences with the world’s leading artists, studios, and talent. What began with award winning and genre-defining work in audio fiction has quickly grown into SALT becoming the pre-eminent one stop partner for creating outstanding audio storytelling and brands. More than a podcast company, SALT stays true to its name helping everything taste just a little bit more like itself. Founded by partners Jamie Schefman, Noah Gersh, and Nick Panama, whose shared wealth of experience in music built the foundation of the company, SALT successes include Blackout, Carrier, The Last Degree of Kevin Bacon, Hit Job, and most recently The Midnight Miracle.

Luminary is a subscription podcast network with an award-winning lineup of original shows you won’t find anywhere else. Subscribers enjoy unlimited access to the full collection of Luminary Original Podcasts, featuring celebrated creators, diverse voices, and important stories told through a new lens. You can find Luminary’s original content via the Luminary app, available on iOS, Android, and the web. And it will be available on the Luminary channel on Apple Podcasts when its new subscription platform debuts worldwide in May.

Luminary was founded by Matt Sacks in 2018 with backing from NEA, a global venture capital fund. Driven by a love for podcasts, Luminary is elevating the podcasting experience for both listeners and creators.

Click here for more information about The Midnight Miracle podcast