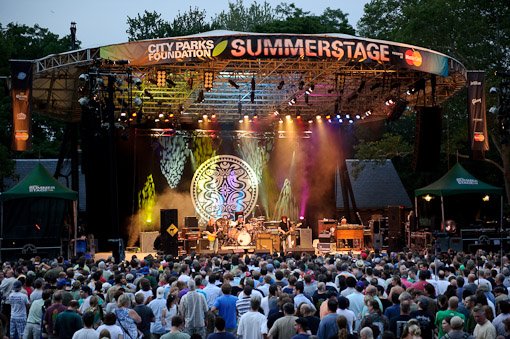 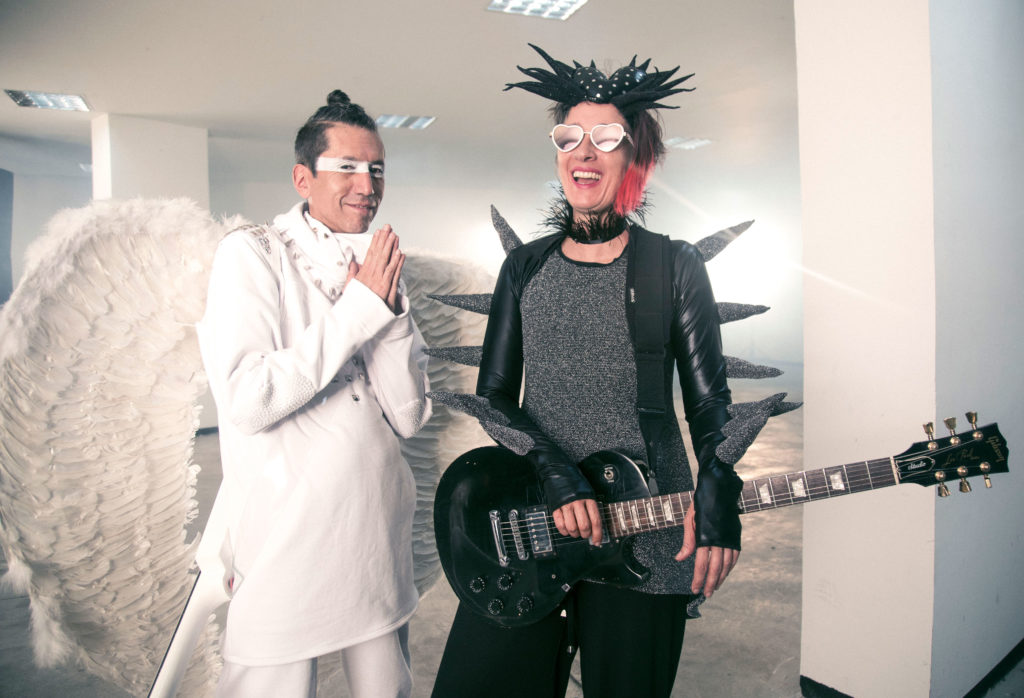 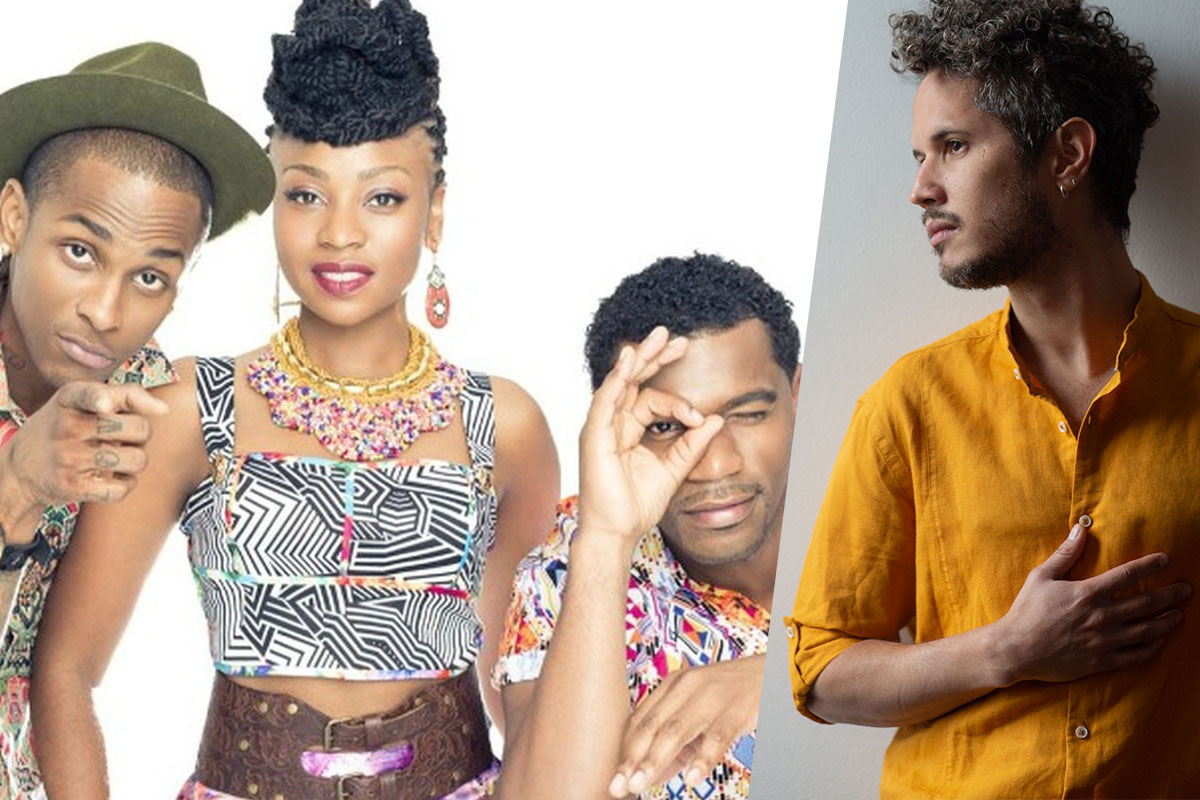 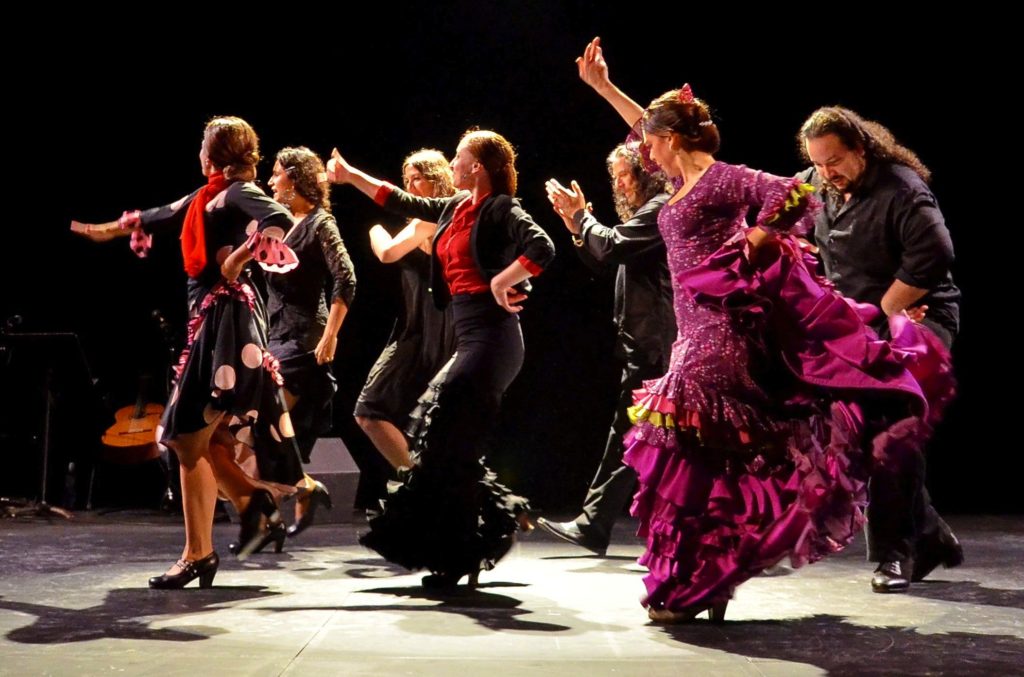 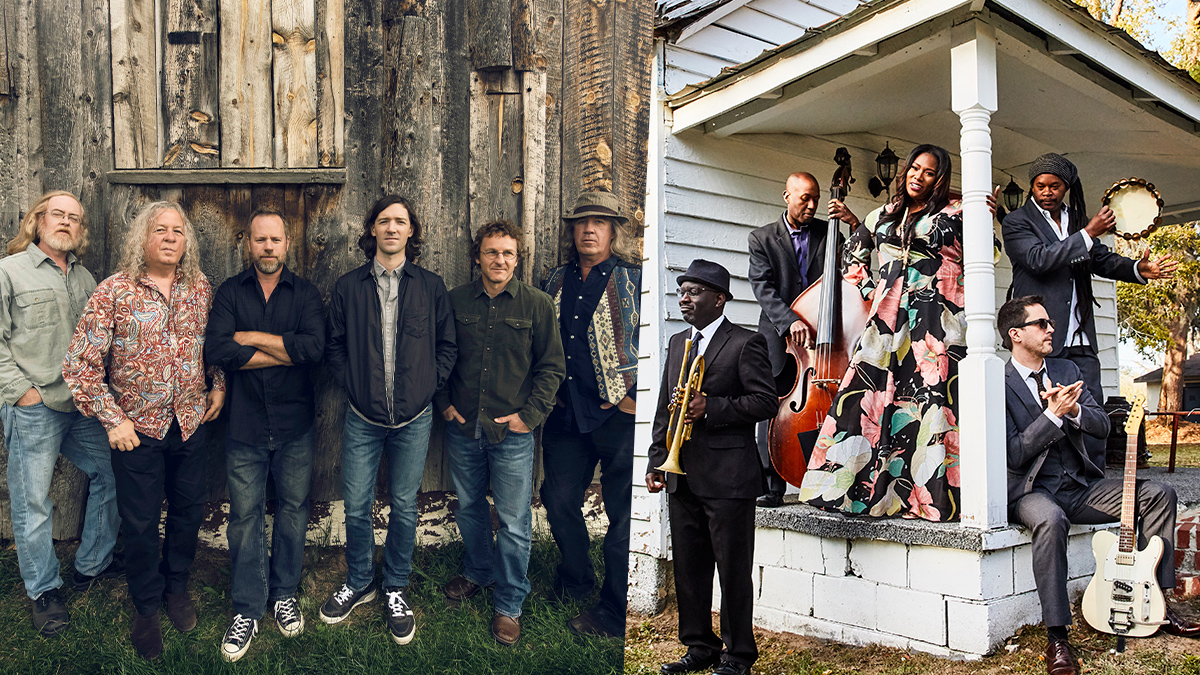 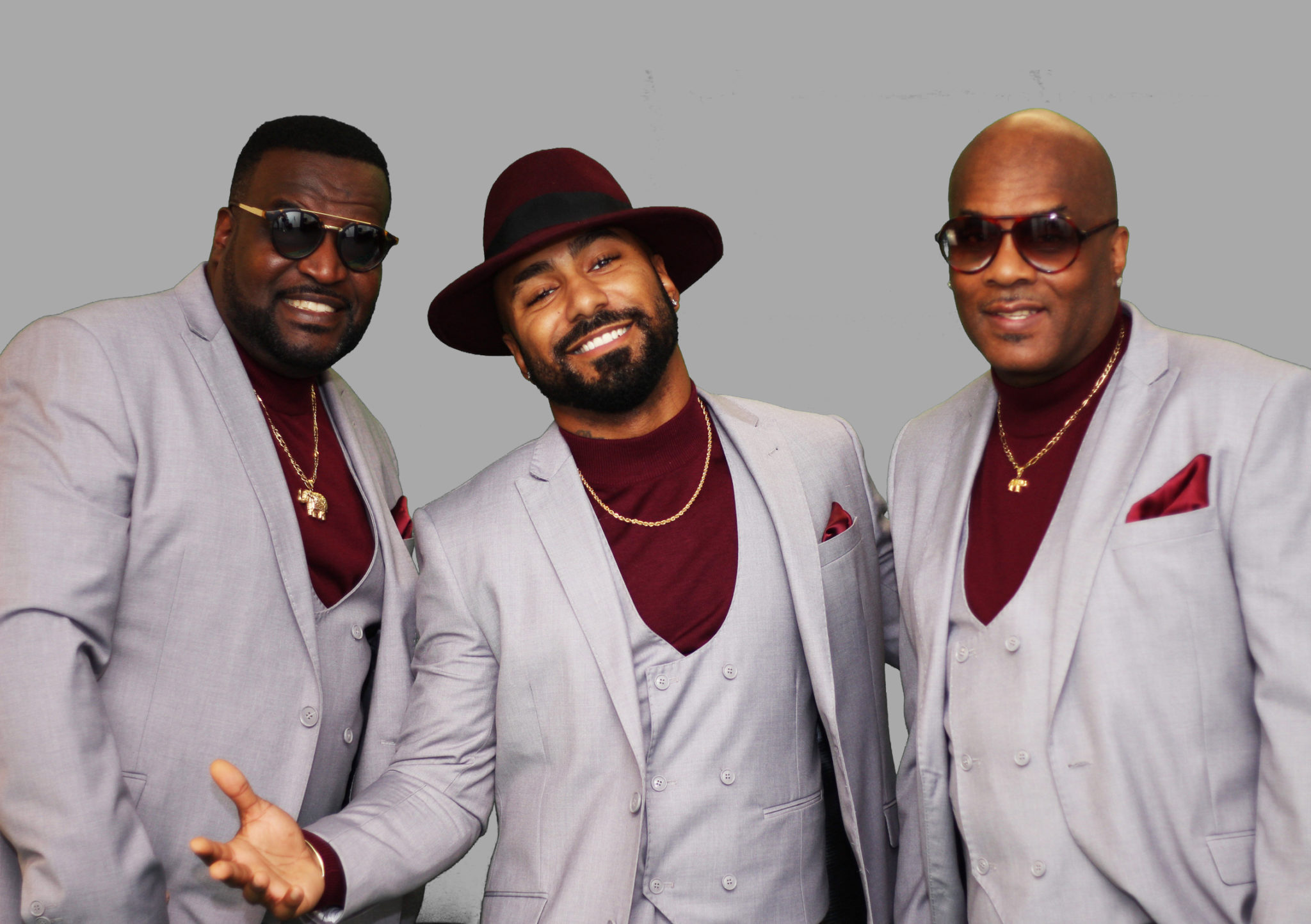 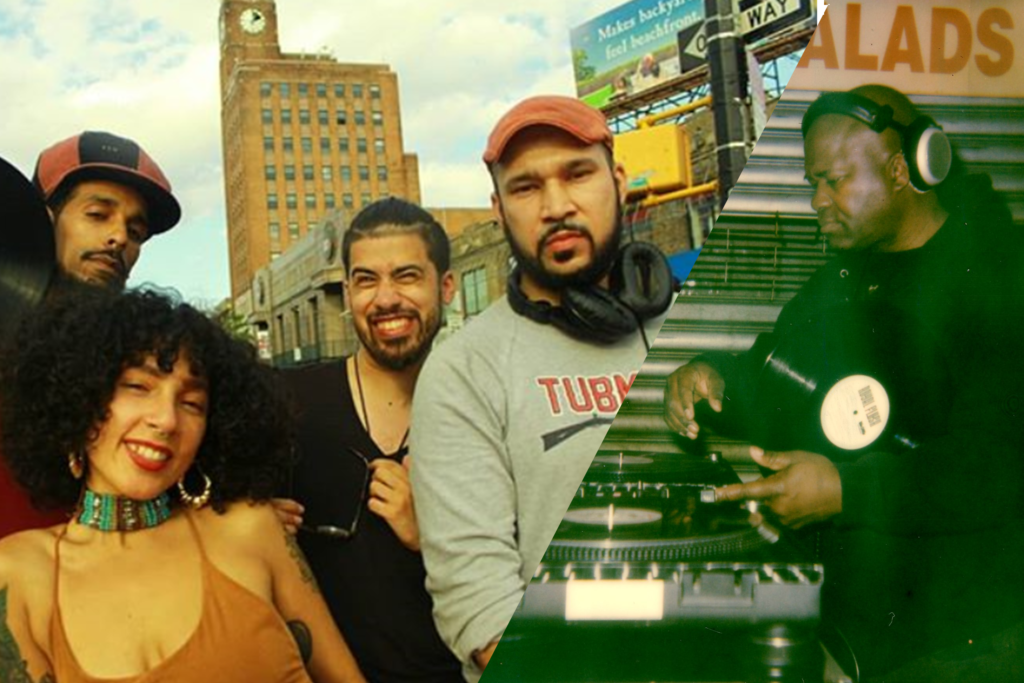 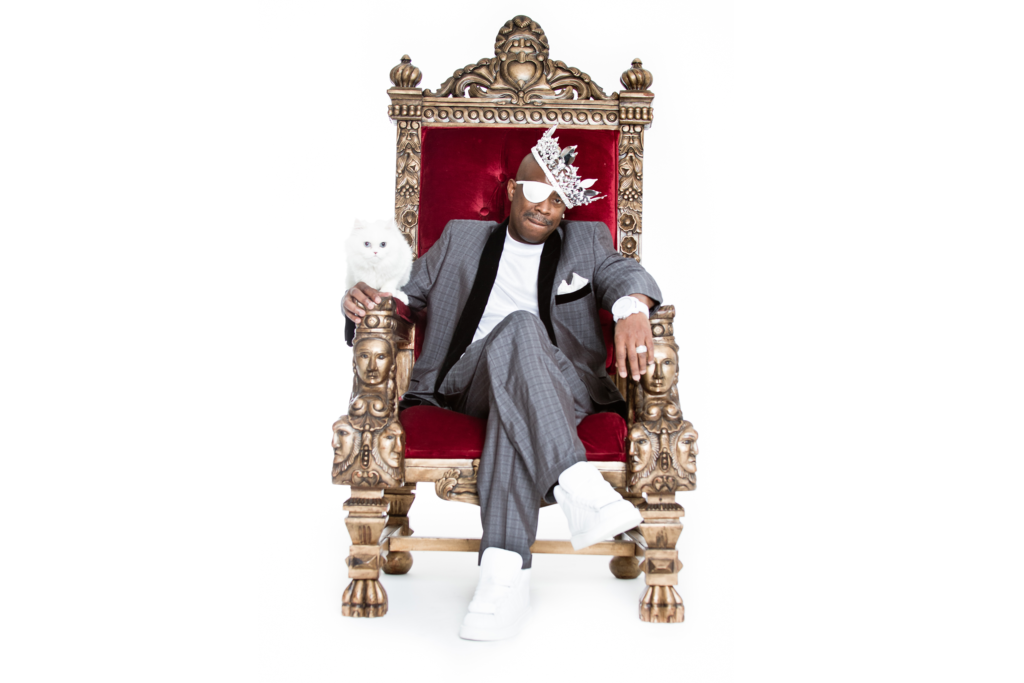 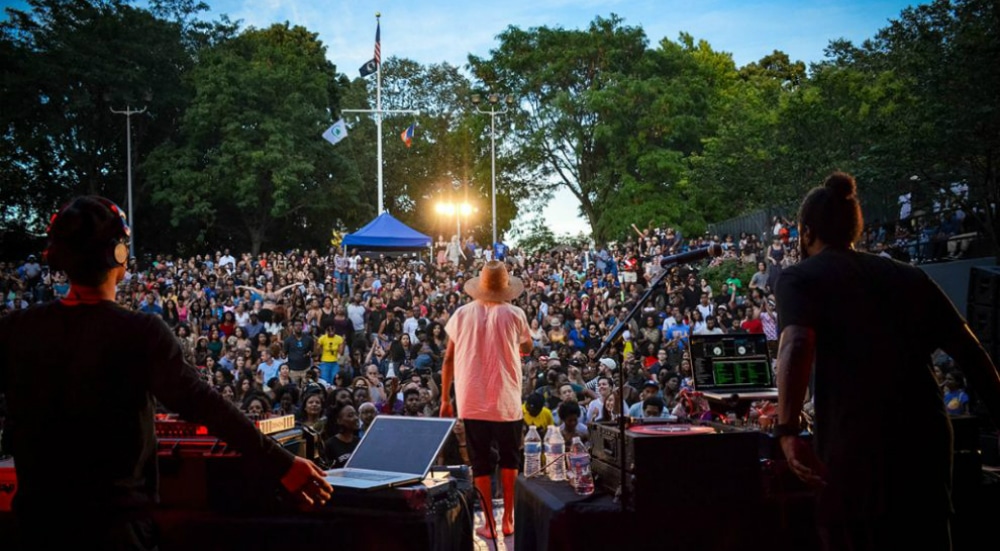 Capital One City Parks Foundation SummerStageis in full swing this month, with a diverse set of shows taking place in Central Park and across New York City. For the most up-to-date scheduling and lineup for all SummerStage programming, visit SummerStage.org for all festival information.

The City Parks Foundation SummerStage Concert Series presents over 100 shows in all 5 NYC Boroughs throughout the Summer. The best part? Almost every show is free and curated specifically for the neighborhood it’s presented in.

Ralph McDaniels Soul Jam Ft. Blue Magic and DJ Hollywood
On Saturday, July 6, hip-hop mainstay Ralph McDaniels, known as the longtime host of Video Music Box, will take the stage in SpringfieldPark, Queens.  At this year’s SummerStagefestival he’s hosting a “Soul Jam,” joined by two acts from the 1970s that ooze style and swagger. The Philly soul quintet Blue Magic is known for its choreographed dance moves, smooth ballads like the lovesick anthem “Sideshow” (1974). DJ Hollywood came to fame as a disco DJ whose call-and-response style of performance pre-dated hip-hop music in the mid-70s. As the first to string together rhymes into a “flow,” the glitzy downtown DJ is credited as one of hip-hop’s earliest forefathers, even though he resisted association with the burgeoning scene in the gritty South Bronx. This freeshow is set to take place from 6 to 9PM.
Who: Ralph McDaniels Soul Jam Ft. Blue Magic and DJ Hollywood
When: Saturday, July 6 from 6-9PM
SummerStage in Springfield Park, Queens

On Sunday, July 7, a host of New York hip-hop legends and legends in the making will take the stage at the Ford Amphitheater at Coney Island Boardwalk. Jim Jones, original member of the hip-hop collective The Diplomats, will take the stage. He is also the co-CEO of Diplomat Records, alongside fellow Harlem rapper and longtime friend Cam’ron, and has directed music videos under the pseudonym CAPO for artists such as Cam’ron, Juelz Santana, Remy Ma and State Property. He will be joined by additional acts Casanova, TJ Porter, Jay Gwuapo, Fetty Luciano, and special guests. DJ Snuff and DJ Drewski will host this free show, which is set to take place from 6:30 to 10PM. Doors open at 6PM.
Who: The Heavy Hitters Brooklyn Takeover: Jim Jones / Casanova / TJ Porter / Jay Gwuapo / Fetty Luciano / Hosted by DJ Snuff & DJ Drewski w/ Special Guests
When: Sunday, July 7 from 6:30-10PM
Where: Ford Amphitheater at Coney Island Boardwalk, Brooklyn

On Wednesday, July 10, Ximena Sariñana will take the stage in Central Park. Ximena Sariñana has been performing for much of her life; as an actor, singing the theme song for a telenovela, and even as a judge on Mexico’s version of “America’s Got Talent.” As a musician, she’s evolved from the jazzy pop of her 2008 Grammy-nominated debut Mediocre, incorporating smoother electronic elements and bouncy dance rhythms into her fourth LP, ¿Dónde Bailarán Las Niñas?. She’s supported by Puerto Rican singer (and Calle 13 alumni) iLe, who won a Grammy for her 2016 debut iLevitable, and the saucy neo-soul trap stylings of Madrid-via-Argentina MC Nathy Peluso. This free show will take place from 6 to 10PM. Doors open at 5PM.  This show is presented in association with LAMC.

On Thursday, July 11, one of Colombia’s first rock bands, Aterciopelados,  will perform in Queensbridge Park. Their music fuses rock with a variety of Colombian and Latin American musical traditions.They are joined by newcomers the bluesy Bogotá-based rock band Diamante Eléctrico, who hold a pair of Latin Grammys for Best Rock Album and the honor of opening the Rolling Stones’ first-ever show in Colombia. Dayansita will be spinning music all evening. This free show is set to take place from 7 to 9PM, and is presented in association with LAMC.

This year’s run in Queensbridge Park continues on Friday, July 12 with a performance from A Palo Seco. Named after a stripped-down style of Flamenco often sung a capella or with percussion alone, the New York-based Flamenco dance company, A Palo Seco, combines traditional techniques with a modern, metropolitan flair. Returning to SummerStage for the first time since opening for Ballet Hispanico in 2014, the company will perform with a live band, and hold a free 45-minute dance class led by artistic director Rebecca Tomas before the show, sharing their expertise in Flamenco with the Queensbridge community.
This free show is set to take place from 7 to 9PM, and is presented in association with LAMC. A Flamenco Dance Workshop with A Palo Seco is set to take place at Queensbridge Park at 7PM. No RSVP is required.

On Saturday, July 13, a legion of Argentinian musicians will take the stage in QueensbridgePark. The socially conscious singerLeón Geico is one of Argentina’s most famous folk rock musicians, sometimes called the “Bob Dylan of Argentina.” He’s joined by the Sub-tropicalista rocker Kevin Johansen,who spent the 90s in NYC with his band The Nada; El Mató a un Policía Motorizado, Buenos Aires indie darlings and multi Latin GRAMMY nominees with twinkling guitars; Silvina Moreno, a sweet-sounding vocalist who studied at Boston’s Berklee College of Music and recently opened for Ed Sheeran and Juan Inagramo, the Buenos Aires-via-Córdoba artist and producer who makes romantic electropop and dabbled in trap stylings with his 2018 LP Best Seller. This freeshow is set to take place from 5 to 9PM. This is the first edition of the iconic Argentine festival, Cosquin Rock in the US, and is presented in association with Cosquin Rock festival and LAMC.

Also on Saturday, July 13, the 20th Anniversary Latin Grammy’s Celebration is set to take place in Central Park. Vincente García, a Dominican musician, singer, and performer who led the Dominican alternative rock band Calor Urbano will perform, along with Colombian hip-hop group ChocQuibTown, Puerto Rican rapper Guaynaa, and Spanish band Macaco. This free show is set to take place from 3 to 7PM. Doors open at 2PM. This performance is presented in association with LAMC.

Avery*Sunshine will perform in Queensbridge Park on Sunday, July 14. Denise Nicole White, better known by her stage name Avery*Sunshine, has brought audiences together for years through her optimistic anthems and stellar stage performances. Her number 1 Billboard single “Call My Name” was awarded ASCAP’s Rhythm and soul Sound of the Year in 2016. Her current album, Twenty SixtyFour features organic grooves and life affirming tracks. DJ P.U.D.G.E. will offer support. This free show is set to take place from 6 to 9PM.

SummerStage in Central Park’s annual Family Day will also take place on Sunday, July 14th. This year’s lineup features two bands making distinctly American music. Railroad Earth, a bluegrass-influenced jam band from Stillwater, New Jersey, takes its name from the Jack Kerouac prose poem “October in the Railroad Earth.” The group serves up an improvisational take on bluegrass with a tinge of folk, Celtic, jazz, and rock in the tradition of bands like The Grateful Dead, String Cheese Incident, and Phish. Charleston, South Carolina’s Ranky Tanky is more specifically southern, specializing in jazz-influenced arrangements of traditional Gullah music, created by the descendants of enslaved Africans in the southeastern U.S.’ Lowcountry region. This free show is set to take place from 3:30 to 7PM. Doors open at 3PM. Ahead of the show, the CityParks PuppetMobile presents Bessie’s Big Shot, a free, traveling marionette show. Bessie’s Big Shot is directed by Bruce Cannon and co-written by Douglas Strich, Alexander Bartenieff, and Bruce Cannon, and will take place at 3:30PM.

On Sunday, July 21, Force M.D.s will take the stage in Corporal Thompson Park. The story of Force M.D.s has long been touched by tragedy-four of its original members have suffered early deaths. But for a time in the late 80s and early 90s, the Staten Island-based R&B group swirled doo-wop harmonies with hip-hop beats into hits like “Tender Love,” featured in the seminal hip-hop movie Krush Groove, and “Love is a House,” which hit #1 on the R&B charts. They will be joined by U.M.C’s, a memorable but short-lived duo from the Island whose light-hearted raps stood in stark contrast to the gangsta rap scene dominating NYC during their run in the early 90s. Composed of Haas G (who would later produce Lil’ Kim & 50 Cent’s “Magic Stick”) and Kool Kim, the duo would score hits on the Billboard Rap Single chart with “Blue Cheese” “One To Grow On.” On the 1s and 2s is Kool DJ Red Alert, a cornerstone of early hip-hop and NYC radio mainstay who performed with Afrika Bambataa’s Universal Zulu Nation, helped popularize the “mixtape” format, and helped break Boogie Down Productions’ seminal single “South Bronx.” DJ XCEL and DJ Thrilla will offer support, and Tariq will host.
This free performance will take place from 4 to 7PM. Ahead of the show, the CityParks PuppetMobile presents Bessie’s Big Shot, a free, traveling marionette show. Bessie’s Big Shot is directed by Bruce Cannon and co-written by Douglas Strich, Alexander Bartenieff, and Bruce Cannon, and will take place at 3PM
Who: Force MDs and U.M.C’s with Red Alert / DJ XCEL & DJ Thrilla / Hosted by Tariq

On Thursday, July 25, Grand Wizzard Theodore, father of the scratch will take the stage in the Bronx’s Soundview Park. He’s joined by DJ Perly, the 1st woman to win the USA DMC DJ Champion title, and the DJ Collective Uptown Vinyl Supreme, who will be accompanied by Boogie Down All-Stars playing live percussion. The B.O.O.M. (Bronx Organic Orchestra Melinated) will perform, and a live performance from the soulful hip-hop group Boom Bits will take place as well. This free show is from 6 to 9PM.

On Saturday, July 27, on of hip-hop’s great storytellers, Slick Rick, will take the stage in Soundview Park. With a trademark eyepatch, clever raps and a vault’s worth of loud jewelry, Rick the Ruler’s inimitable style is often imitated but rarely equaled. His oft-sampled classics, like “Children’s Story” from The Great Adventures of Slick Rick, have reverberated through several generations of MCs in his wake. He’s joined by WBLS DJ Chuck Chillout, who’s worked with Run-D.M.C. and Public enemy and is one of the first DJs to play Rick’s music. This free show will take place from 6 to 9PM.
Who: Slick Rick / DJ Chuck Chillout

When: Saturday, July 27 from 6-9PM
Where: SummerStage in Soundview Park, Bronx

CityParks SummerStage is New York City’s largest, free outdoor performing arts festival, taking place in Central Park and in 17 neighborhood parks around the city, from June-October, presenting approximately 100 performances – the majority of which are free of charge – for 250,000+ audiences annually.