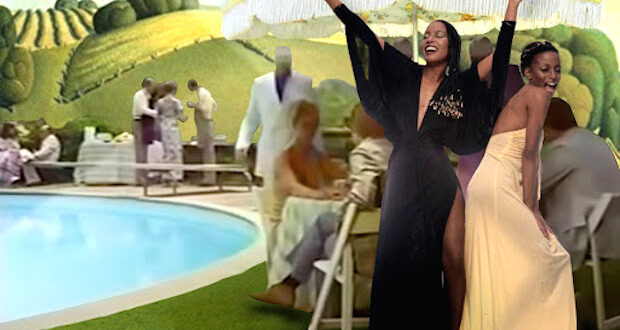 INTERIOR DIALOGUE is an exhibition about social perspectives through the lens of the artist’s personal life experience.  The works are engaged in the active centering of the artists’ intersectional identities through the critical lens of decoration and ornament. This work explores how aesthetics often buttress systems of appropriation, oppression, and erasure. Norsworthy asserts that aesthetics are often used as a vehicle to justify the commodification of cultures and, by proxy, communities. The exhibition is couched within a created environment that interrogates ‘Whiteness.’ The white-box space is defined by Norsworthy’s latest wallpaper work, Blackity (2021), and a series of objects that traverse function, decoration, and art object.

The exhibition is held together with six tondos, each depicting an antique European vessel. Images of these ceramic artifacts were sourced from online and estate auctions. The vases are centered in the round space, and each sit atop a surface situated against a highly decorative backdrop.  Although the vases appear to be depictions of beauty and decoration, they function on another level as symbolic representations of the artist.

INTERIOR DIALOGUE is the sibling of Tell A Lie About Me. I’ll Tell the Truth About You, a second body of Norsworthy’s work created during his residency at Project for Empty Space. The two exhibitions are visually linked through an interactive rooftop mural and the Blackity (2021) wallpaper, which live at Project for Empty Space. The mural is a large-scale version of Norsworthy’s tondos at Long Gallery Harlem.

Tell A Lie About Me. I’ll Tell The Truth About You. will be on view at Project for Empty Space through August 2021 at 800 Broad St. in Newark, New Jersey.

This exhibition is presented by Long Gallery Harlem in collaboration with Project for Empty Space.

Ron Norsworthy’s multidisciplinary work employs notions of spaces and decoration of space as narratives about his lived experience as a queer person of color as well as that of his community/communities. A foundational belief that the rooms, spaces and environments that we inhabit and interact with speak volumes about not only who we are and our identities, but also our dreams, aspirations and our struggles, informs his work. Through the creation of decorative objects and installations, his work carries the viewer with him through the non-linear, layered story of his life: where he’s been, where he is, and where he’s going or might imagine going.

He’s long tapped into the power of space-making as an effective means to share narratives. As production designer for iconic music videos and televised events, he created worlds that helped visualize the soundtrack of a generation. As creative director of his eponymous brand, NHOME, developed in limited partnership with home shopping network QVC, he was the first African-American to develop and sell his own line of bedding and home accessories. His products were inspired by and named for members of his family.

Ron Norsworthy was born in South Bend, Indiana, raised in Iowa and Illinois and received his bachelor’s degree with honors in architecture from Princeton University. In addition to his solo practice, Norsworthy is part of DARNstudio, an art collaboration with his partner and fellow artist, David Anthone.

Norsworthy is a 2019 recipient of the Artistic Excellence Fellowship from the Connecticut Office of the Arts, awarded a residency (with DARNstudio) at Wassaic Project in 2019 and is the 2020 artist-in-residence at Project for Empty Space in Newark, NJ for which he’ll be exhibiting work created during the residency in solo exhibitions opening in May 2021.

His work has been published in Artnet, the New York Times, Glamour, Vogue Italia, InStyle, ID magazine, and New York Magazine among others.

The music videos he’s designed and directed have collectively received hundreds of millions views on YouTube.