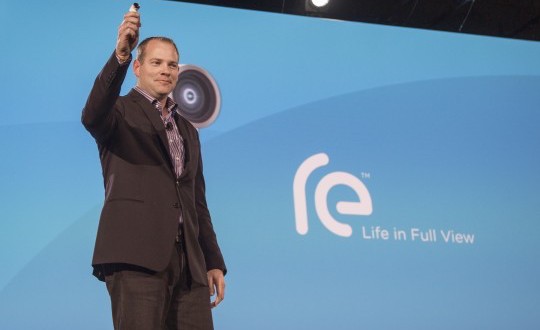 REVIEW: HTC RE @htc @REbyHTC #HTCRe #InFullView
HTC decided to places a periscope in your hand. That’s how I felt upon seeing and then holding the new HTC Re for the first time. This 16 megapixel camera as well as the recently released HTC Nexus 9 represents HTC's continued journey outside of the realm of just smart phones production. The Re is HTC's venture into the hand held camera field but its design and appearance is unlike any other camera on the market.  The L-shaped camera weighs on 66.5grams (2.35 ounces) and measures 96.7 mm in length and 26.5 mm in width and comes in four color options; orange, blue,&hellip;

HTC decided to places a periscope in your hand. That’s how I felt upon seeing and then holding the new HTC Re for the first time. This 16 megapixel camera as well as the recently released HTC Nexus 9 represents HTC’s continued journey outside of the realm of just smart phones production.

The Re is HTC’s venture into the hand held camera field but its design and appearance is unlike any other camera on the market.  The L-shaped camera weighs on 66.5grams (2.35 ounces) and measures 96.7 mm in length and 26.5 mm in width and comes in four color options; orange, blue, teal and I received the white version. 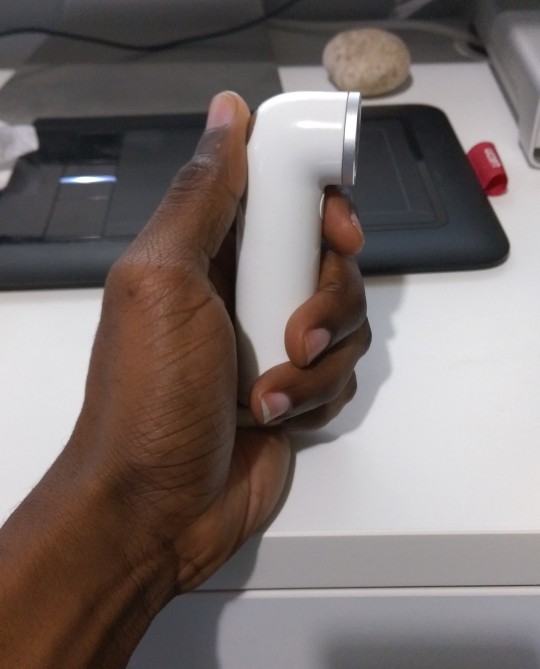 Down Periscope!!! That is what I shout in my head when I look at the Re. When holding the Re I think of one of my favorite movies “Down Periscope”, after all who has not wanted to take a trip in a submarine. Whether this was HTC’s intention when they chose this design, it must be said that I am definitely a fan. 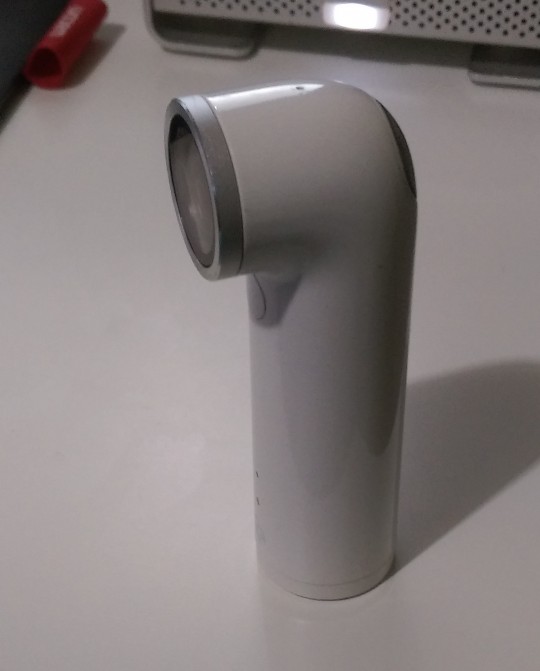 The Re’s simply tubular shape makes it by far one of the most easiest cameras to grasp regardless of the size of your hands. Upon picking up the Re your thumb falls naturally into place allowing you to take a photo by pressing the silver shutter button or holding it to start video recording without having to think about it.  Your index finger naturally rests underneath the lens and from here you can trigger the slow motion video recording mode by pressing and holding the white button there. Something to notice about the Re is the lack of a ON/OFF switch, but this does not mean there isn’t one, picking up the device turns it on via drip sensors built into the shaft and once it leaves your hand it powers off. 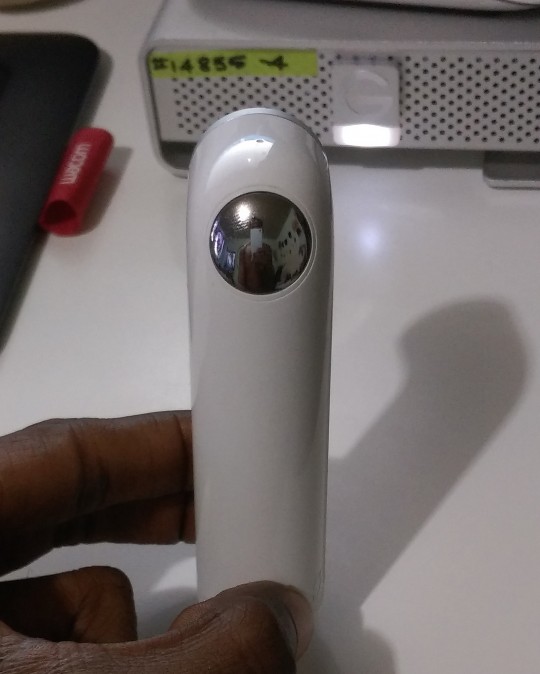 Due to the Re’s  uniform shape and button placement, taking photos and recording video feels natural whether you are a lefty or righty . The HTC Re was built to fit into the palm of your hand, literally.

What do you think of a 1/2.3 inch 16MP CMOS (complementary metal oxide semiconductor) sensor camera which shoots at a constant f/2.8 aperture that’s always ready once you pick it up? That is what the HTC Re brings to the table, allowing the capturing of 1080p video at 30 fps in standard time, 120 fps in slow motion and allows shooting at a 146-degree wide-angle. 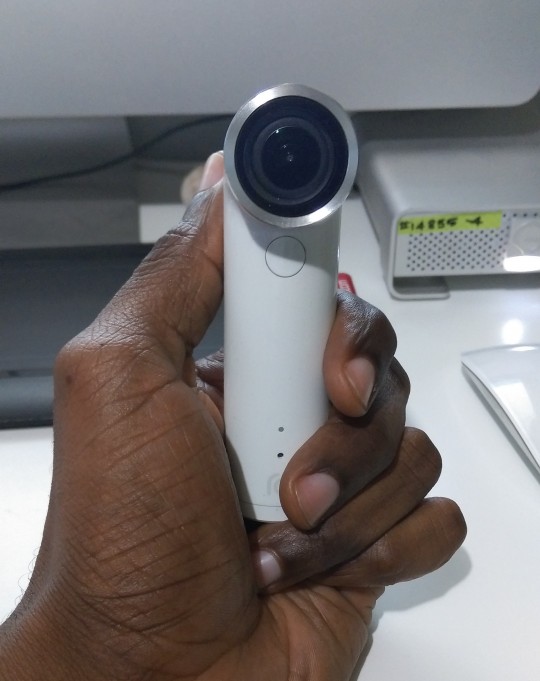 The Re’s 820mAh battery allows for approximately 1 hour 50 minutes of video recording at 1080p or roughly 1200 photos before needing to recharge, for video recording this can be very limiting. However, a solution to this problem is the presence of the micro usb port used to charge the device being located at the base of the Re allowing it to be plugged into any number of portable charging devices on the market.

HTC promotes the Re as a lifestyle camera, being able go everywhere with you including the pool and the beach since it is waterproof  up to 1 meter (3.3 feet) and up to 3 meters (9.8 feet) with the optional waterproof cap sold by HTC. This will make the Re a great device for capturing those upcoming summer pool parties since you won’t have to worry about falling into the pool with it, in fact you may just jump in yourself.

All images and video captured by the Re are stored on a MicroSD card (8GB card included and supports up to 128GB) conveniently located at the base of the camera under a watertight plug. Besides the SD card and micro usb port the base of the Re has a standard 1/4-20 tripod mount allowing for various mounting options. HTC also provides its own line of mounting accessories for the Re which you can check out here. 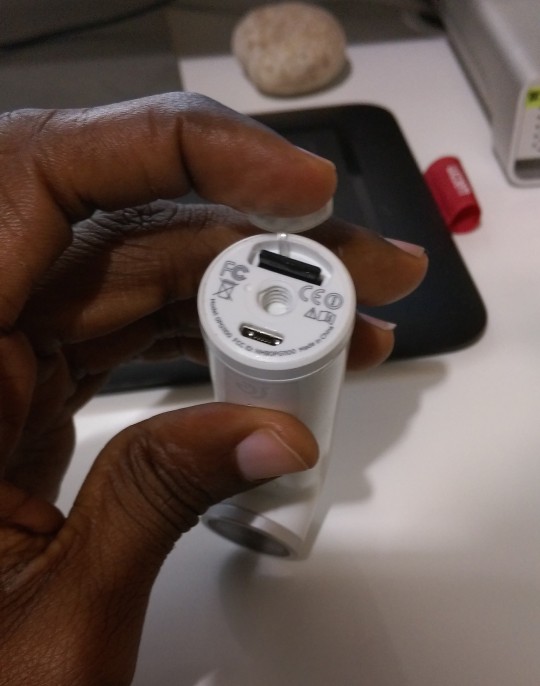 The Re connects to Android and iOS devices using the Re app available as a free download in both app stores. Connecting the Re is done by launching the app which scans for the Re and provides on screen instructions on pairing the device. Pairing on iOS devices is not as simple as Android, where as on android devices bluetooth is all that is required to be active to pair. iOS devices require that Wi-Fi be enabled and then most join the Wi-Fi network generated by the Re.

The Re app provides access to the camera settings and allows viewing and downloading of captured images and video to your mobile device. 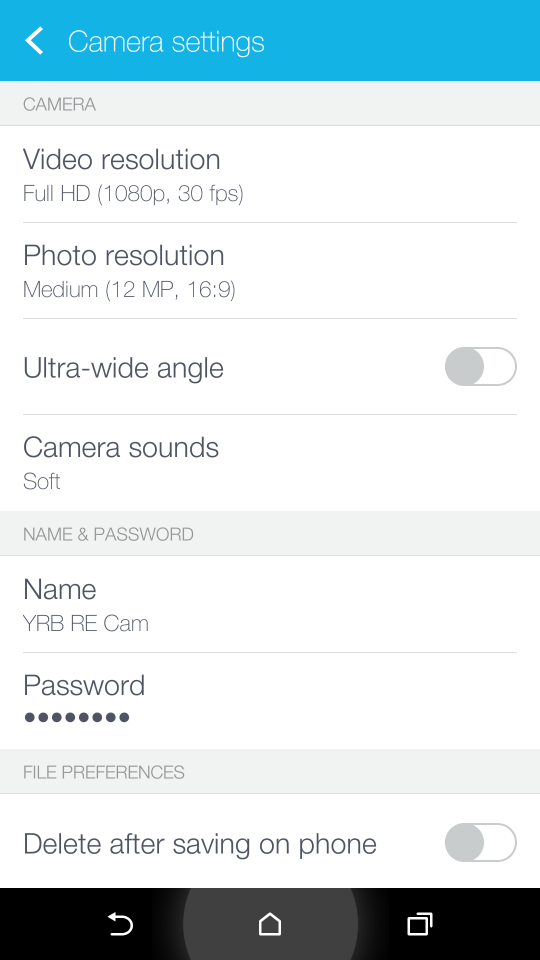 The app possesses a time-laspe mode allowing a series of photos to be taken over a period of time which it then uses to create a movie. Everything from frequency of shots taken to how long record and playback speed can be set via the app. 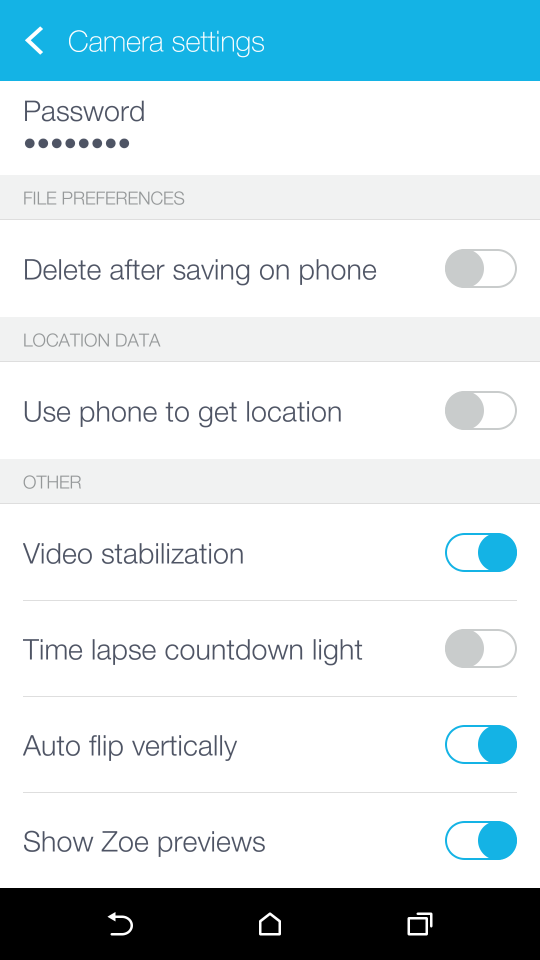 The Re app enables the use of your mobile device as a viewfinder and remote shutter control, this can come in handy when the Re is mounted on a tripod. 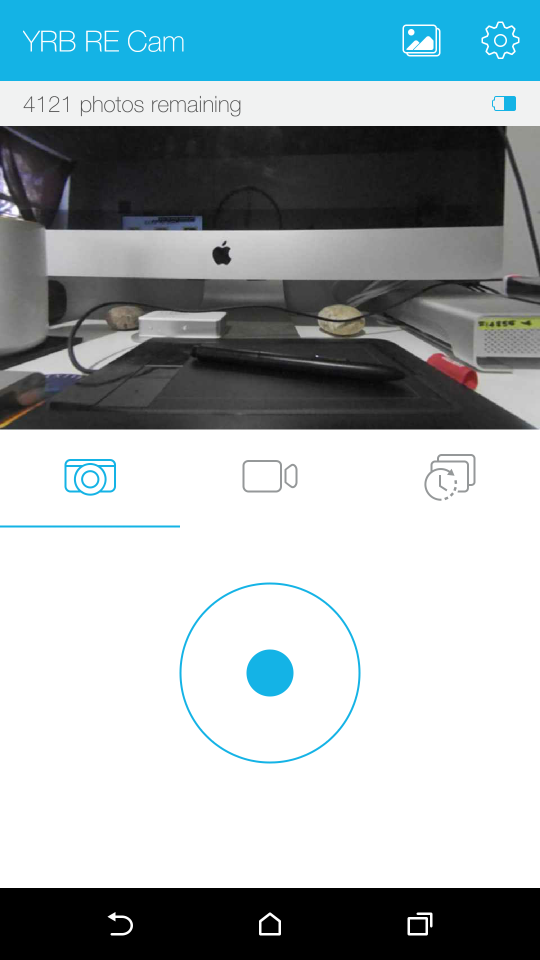 The 16-megapixel camera takes still photos with a 4:3 aspect ratio however, the resolution can be reduced to 12-megapixel via the app if you want to shoot at 16:9.

When shooting with the Re it has to be noted that you don’t have to be great at composing your shot since it covers such a wide angle. Yet there is one thing to keep in mind, that is the delay between pressing the shutter and the shot being taken. This delay can lead to blurred images and end up ruining your shot, in short there is no image stabilization.

Once you have gotten the hang of the Re and it’s wide angle lens which can distort objects in the manner that a fish-eye lens does, you will be able to take many fun, interesting and creative shots which will be sharp and in focus. 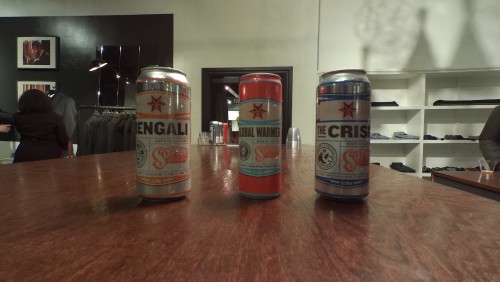 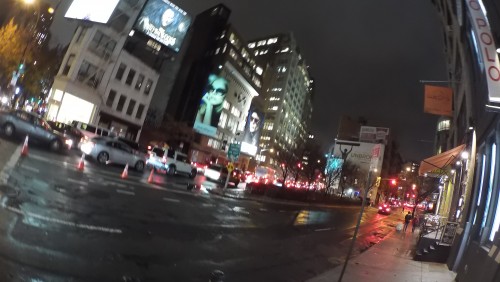 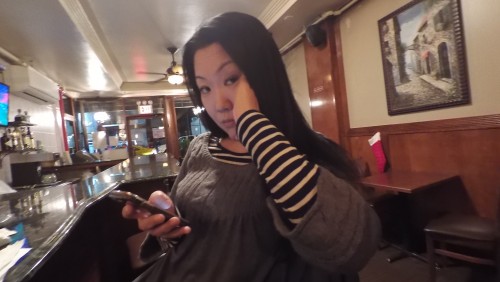 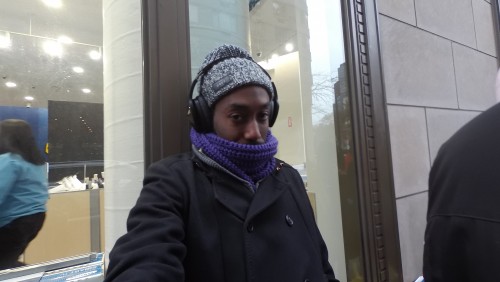 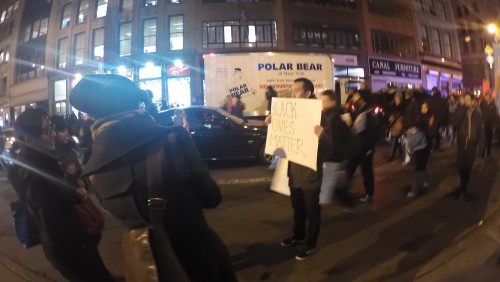 When it comes to standard and slow-motion video, capture is smooth on the Re but its 720p resolution takes a toll on the video quality leaving it less than crisp, colors also end up looking soft and washed out.

The Re’s maximum video capture resolution is 1080p at 30fps but it can be reduced to 720p at 30fps based on if you are trying to save space on your SD card. An aspect of the Re that is surprising is audio caputured during recording, it is extremely clear and crisp.

Despite the issues that I experienced with the Re, it turned out to be a fun and easy to use camera that I can see many people young and old enjoying and using in their everyday lives. Now don’t expect to make movies or capture amazing photos with this device but with it in hand, it’s less likely that you will miss a memorable moment with the Re in your pocket.

However, there are somethings that can’t be missed, it is the price tag associated with the Re, at $200 it’s pretty pricey. HTC might need to consider lowering the price because after being asked about the Re the next question was always,”How much is it?”. When informed of the price most individuals thought it a little steep, so I believe at a lower price it would do well. The battery life on the Re is the other issue and could be improved but given its size I could understand how having a long battery life may be difficult to achieve.

The design and shape of the Re are of the most attractive aspects of the device and I am always happy to tell people about it when asked “What is that!?!”.

HTC did well in creating this uniquely shaped camera and it is my hope they continue to think outside the box when it comes to their future creations.

REVIEW: HTC RE @htc @REbyHTC #HTCRe #InFullView
HTC decided to places a periscope in your hand. That’s how I felt upon seeing and then holding the new HTC Re for the first time. This 16 megapixel camera as well as the recently released HTC Nexus 9 represents HTC's continued journey outside of the realm of just smart phones production. The Re is HTC's venture into the hand held camera field but its design and appearance is unlike any other camera on the market.  The L-shaped camera weighs on 66.5grams (2.35 ounces) and measures 96.7 mm in length and 26.5 mm in width and comes in four color options; orange, blue,&hellip;

Previous: Pitbull, Ne-Yo – Time Of Our Lives @pitbull @neyocompound
Next: One Child Trailer a #documentary by @zijianmu