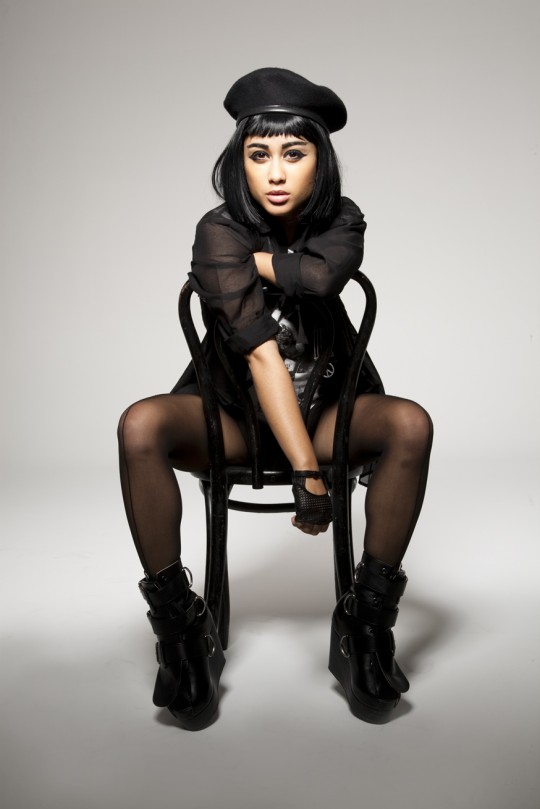 Perez Hilton put aside his knack for trashy celeb gossip when he started blogging about an artist he discovered on MySpace back in 2007, and this time used his computer to bring attention to someone who deserves it for the right reasons. The U.S. has the “Queen of Mean” himself to thank for lighting a fire under England native Natalia Kills to pinch together some pennies and make the move across the pond to L.A. to pursue an already promising music career.

With all the Hilton hype following her to the City of Angels, it wasn’t long before Natalia found herself in the midst of several enticing label meetings, but one meet and greet with The Black Eyed Peas’ will.i.am and “everything fell into place.” What ensued was a joint signing with will.i.am music group and Cherrytree Records, where the new singer-songwriter is getting set to release her debut album, Perfectionist.

“I’m a perfectionist, for sure,” Natalia explains about the album title. “It’s not [in] the sense that I want everything to be perfect; it’s about finding the perfect way to deal with the frustration of always trying to achieve your desires and ambitions. And when shit gets fucked up, how you deal with that to still be accepting. It’s an inner struggle; it’s a battle. But, honestly, I feel like we’re all perfectionists to a certain degree because we’re all looking for the best, we’re all looking to follow our desires.”

For her first full-length, things couldn’t be more perfect for Natalia, who had the opportunity to work with super producers Jeff Bhasker (Kanye West, Jay-Z), Fernando Garibay (Lady Gaga, Britney Spears), Ron Feemster (Michael Jackson) and Cherry Cherry Boom Boom. Helping to hone her sound, which has already been accurately described as “dark pop,” the team of musicians has given Natalia a platform to belt out some heart-wrenching and riotously expressive music.

“I just wanted to literally make my album about me, my life experiences, ‘cause then it would be honest, and a lot of the music I grew up listening to was quite honest,” Natalia states. “I feel like the approach to making music now is what’s gonna sell… Not that there’s anything despicably wrong with that because music is still just to be enjoyed by people. But, for me personally, what I’ve always connected with and admired – things that have shaped my life and made memories – has been music that’s just really emotional and personal.”

No stranger to artistic endeavors, Natalia began her career in the creative arts through TV work and film, which led to her eventual interest in co-producing her own web series, Love, Kills xx. The three-minute films are designed to give audiences insight into the airwaves of Natalia’s ingenious brain and find a way to relate to the things that go through everyone’s minds each day.

“I wanted to find a way for people to get to know me in a very kind of cerebral and intimate sense,” she says. “It’s a very intimate way to know someone – to know their thought process. I thought, let me write down all the things I think about… and I just decided to make my show out of that. It’s me reacting to these bizarre situations as I do in my mind. It’s soundtracked to my music so people can get a sense of my sound before the album is even out. [Acting] helped shape my desire to do music because I kind of got bored after a few years of playing a character, and I just really wanted to be myself instead of playing someone else’s creation in a fictional situation.”

Citing influences like Alanis Morissette and Eminem, Natalia is sure to leave an impression, promising no compromises and many, many surprises.