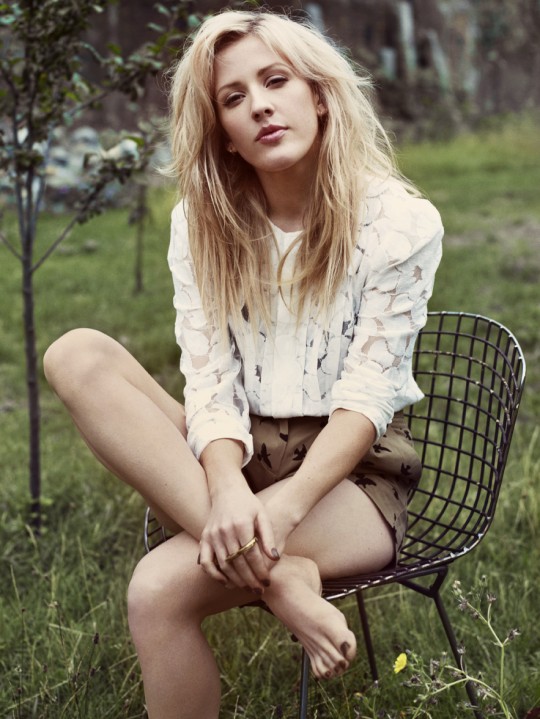 In the fall of 2010, U.K. songstress Ellie Goulding held a mini-tour in the U.S., performing only two dates – one in L.A. and one in New York City. Both shows sold out, with attendees reciting songs word for word. Prior to the performances, Ellie had no formal release in the U.S., with the exception of her single “Starry Eyed,” which made the New York Times’ Top 10 Songs of 2010 list. She even won the BBC Sound of 2010 Award and 2010 BRIT Critics’ Choice Award before her album debuted in the U.K. Not too shabby for a girl who’s been “making noise since the age of four” and began singing and playing the guitar at 14.

“I wasn’t really a singer singer,” she admits. “It wasn’t until I got to University that I actually started. I entered a contest and I won, and then people started paying attention to me. Quite a lot of attention all of a sudden.”

Ellie is leading the charge for folktronica, where acoustic sounds mingle with electronic beats. The doe-eyed Siren with an angelic voice pens her own lyrics and performs live shows by strumming an acoustic guitar with one hand and banging on a tom-tom drum with the other.

Across the pond, Ellie’s debut, Lights, dropped in March 2010 and soon skyrocketed to number one on the U.K. charts. The LP re-released that December under the name Bright Lights, this time boasting extra songs and getting noted all over again as DJs worldwide remixed almost every track on the album. Now, Lights is impacting the States this spring with a significantly trimmed down 11-song tracklisting.

“There were some songs I didn’t want on the album for some reason. Just ones I’ve outgrown and grew a bit tired of. I wanted to refresh it a bit with newer songs,” she explains. “I wanted [the U.S.] to have an accurate portrayal of me.”

With her success cemented overseas, Ellie is poised to join the ranks of fellow U.K. stars who have traveled Stateside and made a huge impact. She already has Rihanna dying to work with her after she heard Ellie nail a cover of her hit “Only Girl (In the World).” However, it was her cover of Elton John’s “Your Song” that had the U.K. feeling warm and fuzzy after being used in the Christmas advertisements for colossal English retailer John Lewis. According to Goulding, though, it’s time to hang up the covers. “I think I should focus on my own stuff now,” she says.

And focus she has, pandering to the U.S. and U.K. markets while finding the time to pen an already anticipated sophomore album in Ireland. Unsurprisingly, she wouldn’t mind collaborating with Rihanna, but also hopes to link up with Kanye West. “Not even because he’s one of the biggest rappers in the world. I just really love his music and I’d love to do something with him,” she discloses.

Ellie Goulding has arrived in the U.S. with half the world already in love with her. Still, she remains the shy girl she admits she’s always been – but she’s working on that. “I need to be a bit more confident,” she humbly advises. “I feel like I deserve to come here and have a shot.”

Previous: Radar: The Naked and Famous
Next: Radar: Natalia Kills

Kathy Iandoli is an American author and journalist.