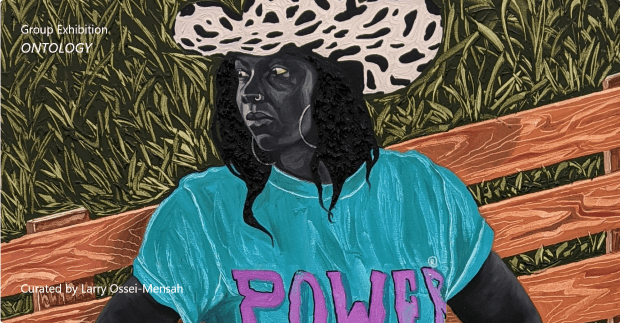 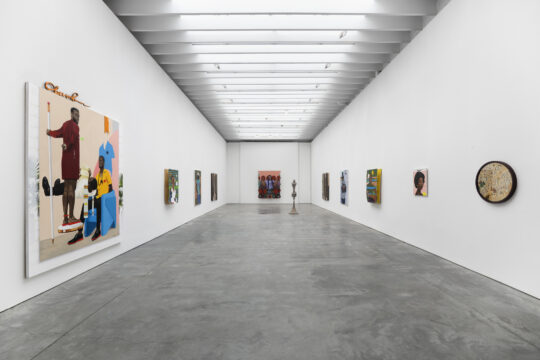 The exhibition is a meditation on notions of camaraderie, identity, heritage, self-preservation, and memory. 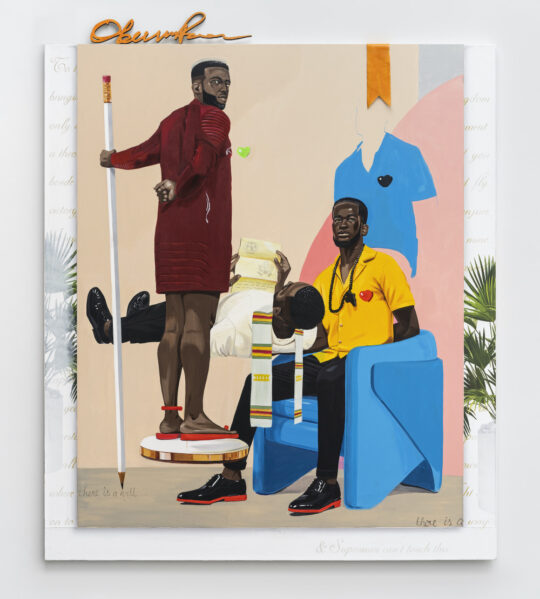 Each artist in ONTOLOGY presents a unique opportunity to explore from their own lived experience as individuals of Ghanaian heritage living and working in the United States. Ossei-Mensah’s intent with the exhibition was to leverage these experiences as a vehicle to unfurl the intersectional lines of inquiry around gender, nationhood, shifting notions of home, and navigating racial bias. 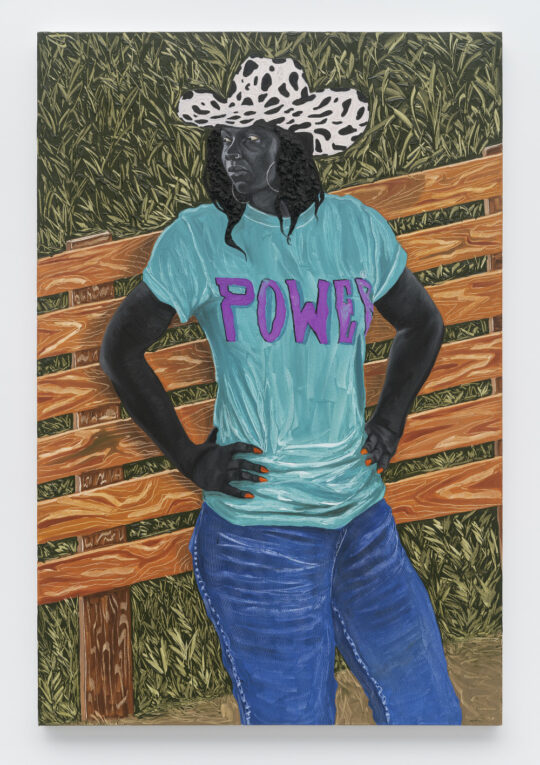 The show title derives from Ontology, the branch of philosophy that studies concepts such as existence, being, becoming, and reality provides a robust framework for the exhibition.

Moreover, what can a broader audience learn about themselves and our society from the perspective of these artists? The tension between asserting one’s own personhood along with considerations of citizenship, identity, and humanity collide with sometimes maladaptive coping strategies. Codeswitching, for example, is the practice of switching one’s patterns of speech or behavior according to the cultural context themselves. 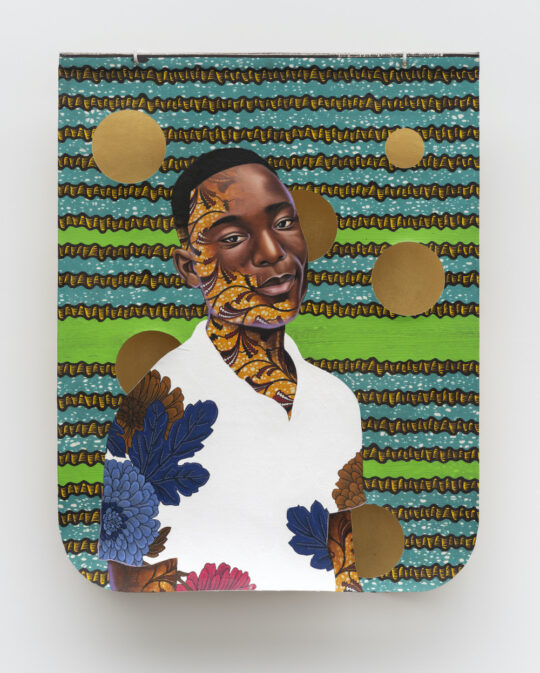 For each artist featured in the show, such adaptations are germane to their daily lives. These adaptations necessitate a constant, personal professional, and cultural negotiation. But at what cost do these adaptations shape creative production and personal perception? The works in the exhibition contend with the inherent complexities of liminal existence that many communities on the peripheries confront every day.

Several artists in the exhibition source inspiration for their practice from Ghanaian symbology, continental iconography, and cultural signifiers embedded within their own visual vocabulary. Others have developed their own rituals, an act of creative liberation that asserts new possibilities while maintaining personal and cultural heritage. 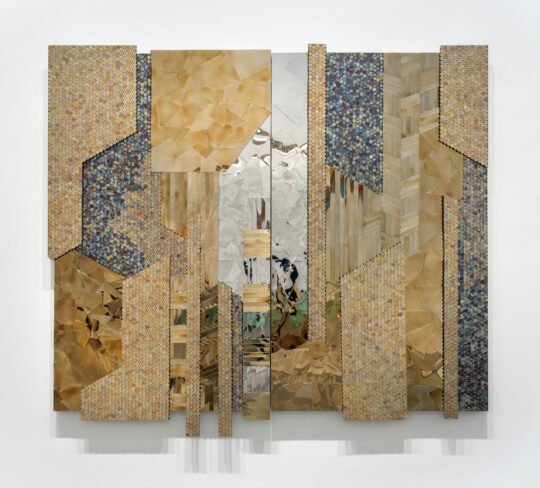 All formally trained as artists, they have cultivated an intellectual intuition that governs their approach to art-making. Collectively, these strategies employed by all the artists are unified in their desire to invite the viewer into a deep and confrontational discourse. The works featured in the exhibition offer an invitation to a unique societal exploration via a bi-cultural lens. They also confront resistance, both structural and environmental. At the nexus of this ideology emerges new considerations of ontology as informed by the movement, throughout time, of Africans into the occidental world. 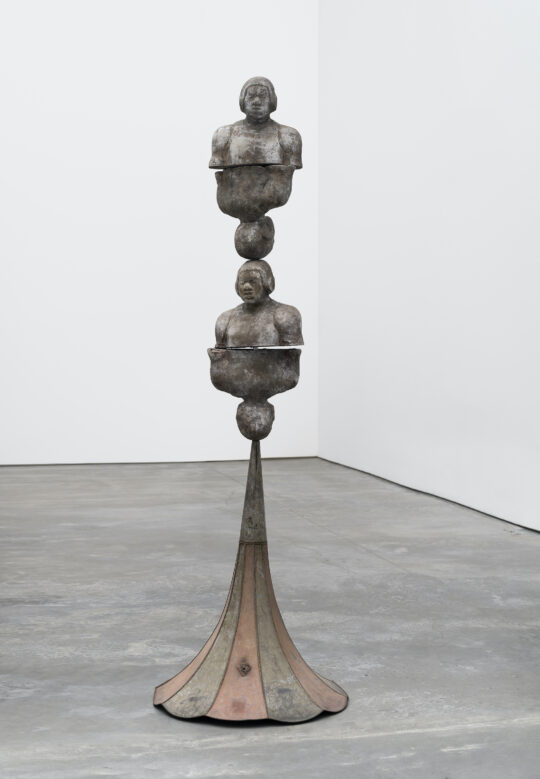 ONTOLOGY is an invitation to unravel how each of these artists’ practices and core artistic concerns can serve as a tool that informs our understanding of ourselves, each other, and the world around us. Bound by a connection via their Ghanaian heritage, these five artists each utilize their practice as a forum to empower themselves and tap into ancestral memory that evokes transcendental experience for the viewer. These artistic strategies are a vital tool during social unrest, racial turmoil, economic uncertainty, and a global pandemic. ONTOLOGY is a forum to explore how artists mine their cultural backgrounds and personal histories, a vehicle to navigate the liminal space between the known and unknown. 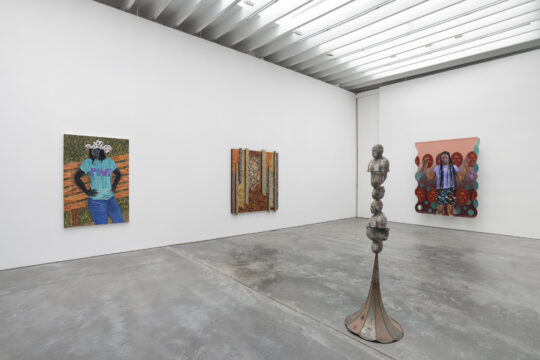 Conrad Egyir is a painter based in Detroit, MI, who creates bold, bright, graphic narrative paintings and portraits that stylistically pull from pop art, political propaganda, and religious art. His iconography is drawn from superstitious symbols of West Africa, cultural anachronisms, and art history. Redefining frame and form, Egyir’s paint-ings take the shape of stamps, postcards, and notepads, presenting his figures as commemorative memorabilia honoring people of the African diaspora. At its core, Egyir’s work is about community and identity told through a language of painterly delight, making him a powerful artist for our next Facade Project. Egyir’s narrative paintings often represent geographical places, exploring citizenship, migration, and revolutions of those locations.

Derek Fordjour makes paintings, sculptures, and installations whose exuberant visual materiality gives rise to portraits and other multilayered compositions. Born of both broad sociological vision and a keen awareness of the body’s vulnerability, Fordjour’s tableaux are filled with athletes, performers, and others who play key roles in cultural rituals and communal rites of passage. In his paintings, Fordjour methodically constructs the ground of each composition through a collage-based process involving cardboard, newspaper, and other materials and pigments.

Otis Kwame Kye Quaicoe’s figuration is built upon a palette where color becomes its own language of transformation, be it social, political, or personal. His are images of empowerment and redemption, sophistication and humility, curiosity and quietude. Each figure becomes a symbol of the reclamation of cultural dignity, embracing the idea of origin and personal narrative as it relates to gender and race dynamics.

Patrick Quarm paints portraits of young African individuals directly onto collaged and perforated African wax print fabric. His paintings weave and splice cultural signifiers from different eras and communities into multi-layered works that invite the viewer to explore them from different angles.

Yaw Owusu creates installations that repurpose found objects, shifting otherwise-worthless materials into en-counters that challenge political landscapes. Using steel, gold, silver, copper, and found objects in foils, sheets, and coins, the processes penetrate the strata of Trade, exchange, and labor histories, questioning the foundations of contemporary economies. An approach rooted in a deep sense of playful alchemy that embraces the complexity of currency, symbolism, and meaning. The work becomes a mediation on the question of how value in itself is made and unmade.