The Untitled Space is pleased to present “Traumatica Dramatica” the debut New York solo exhibition of artist Meg Lionel Murphy on view from June 5 through July 2, 2021. 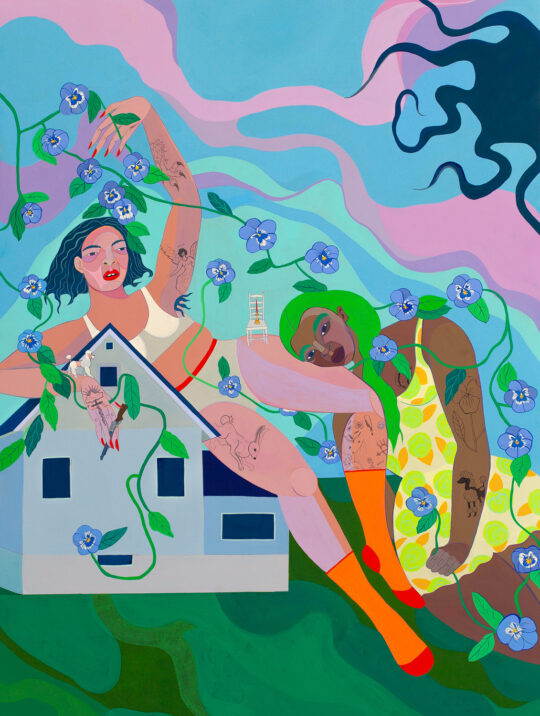 Curated by Indira Cesarine, “Traumatica Dramatica” debuts the latest series of Murphy’s vibrant and emotionally charged paintings. Lionel Murphy’s paintings are directly influenced by her own personal experiences, as she copes with debilitating PTSD from severe domestic violence. She works out of a little blue shack in a junkyard on her family’s property in Wisconsin, where she paints detailed, vivid works on paper and panel depicting heartbroken giants that magically grow larger, stronger, and scarier than the world around them. 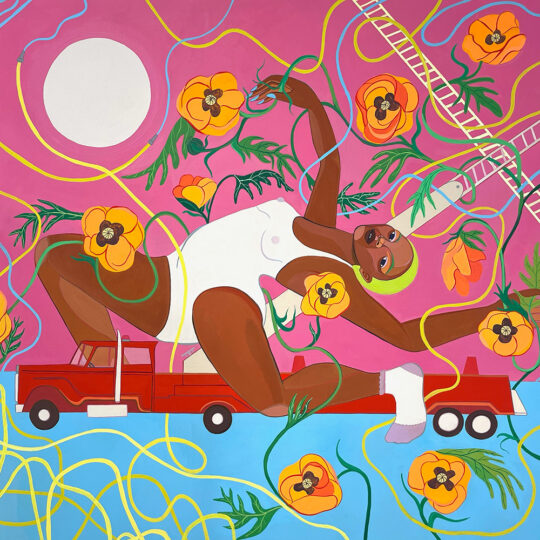 “The idea of violence haunts me, and I try to etch that subject into even the pinkest of paint,“

she has stated of her visceral portraits.

Lionel Murphy depicts through her vivid brush strokes and intricate imagery a reverie through which the viewer can get lost with each poetic detail. Her paintings of the female form as giantess unconquerable figures address their experiences of pain, trauma, and healing as well as their interactions with the environments they consume as they assert their power. 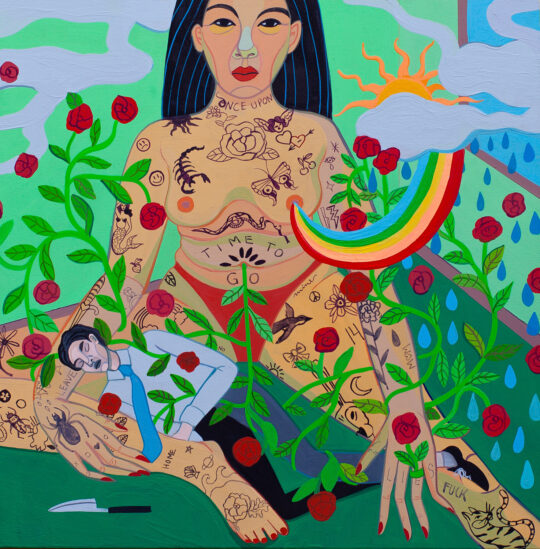 Her work depicts a reverence for fragility and humanity while examining questions about whiteness, gender, sexuality, class, sacrifice, pain, sickness, loneliness, and most of all—violence and its haunting memories. 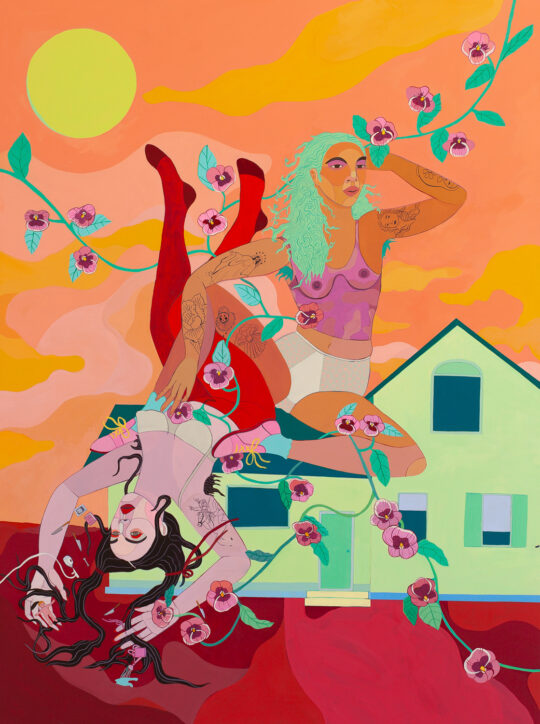 ARTIST STATEMENT:
“I want my paintings to be good luck charms. To be talismans of growth. I want viewers to escape for a moment, into this fantasy world I’ve created… Traumatica Dramatica is a spell. It will hurtle the viewer between moments of violence and euphoric escape, all while drenched in vibrant color. The title is both tongue in cheek and deadly serious. Traumatica Dramatica conjures a world of fantasy, far, far away, where violence magically transforms femme bodies into a monstrous size, so that their pain must be seen, felt, and reckoned with. These paintings are monuments to the wounds of violence and mental illness. Hung together, the imagery creates an epic story of how deadly memories and extreme moods manifest deep in our bones, mind, and imagination. 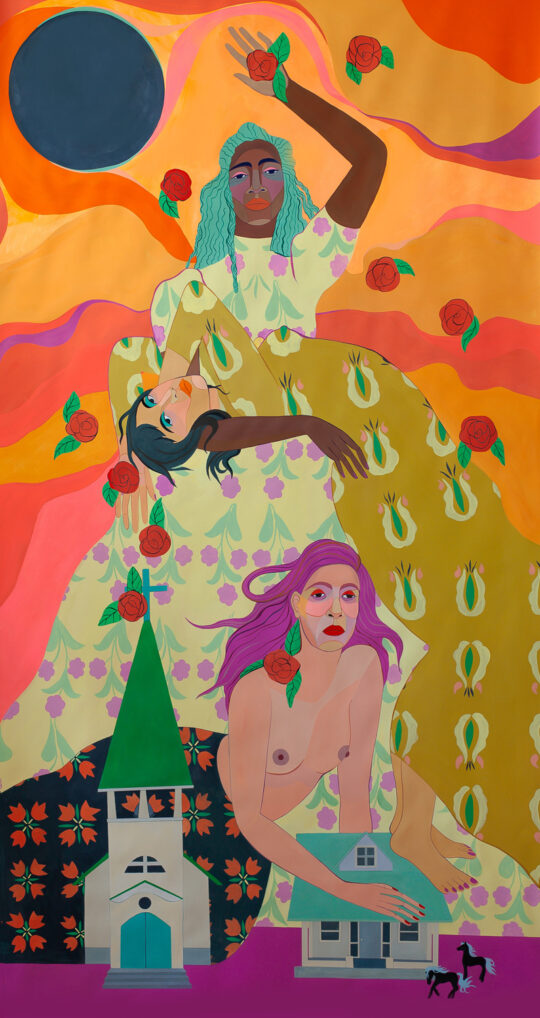 I first made paintings for myself and my own survival, before finding an audience. I am now building an audience upon the rubble of old art world rules. My paintings are figurative, girlish, and playful. I collect miniature dollhouse objects and paint them into the work, hinting at backstories for each of the figures. My paintings are figurative, girlish, and playful. What is painting the figure but playing with dolls, imaginary friends, and make believe? 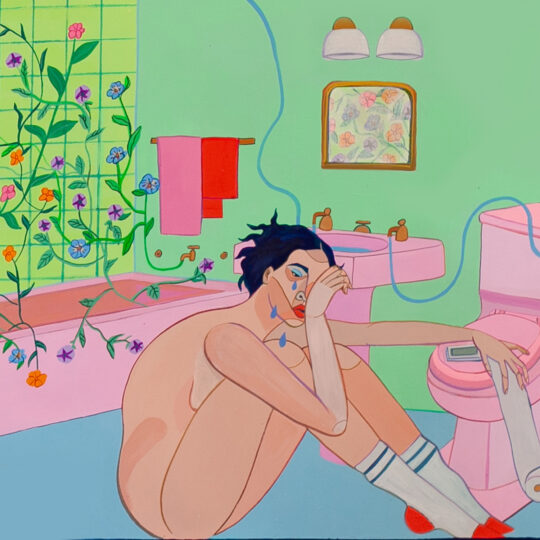 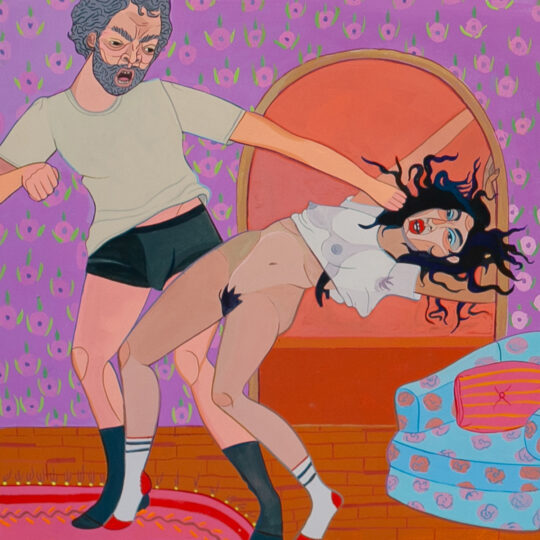 A rendition of one of Picasso’s paintings of his lover Dora Marr can be found in my work “An Origin Story,” which serves as a skeleton key for Traumatica Dramatica. Picasso, the man on which the modern history of art hangs, was accused by his partners of extreme physical and emotional violence, branding, and rape. He famously called Marr the embodiment of women’s pain. “Women are machines for suffering,” he stated. This painting, titled “Woman Weeping” embodied for me as an artist the pain many women have experienced at the hands of men. Picasso said women are either doormats or goddesses. His truest art was turning goddesses into doormats. In Traumatica Dramatica, women and femmes that are flattened to the earth in pain are still goddesses even if they are not giants. I believe we must find ways to communally hold both our own trauma and that of others.

My favorite stories as a girl were about unicorns, rainbows, fairies, and angels. Trees could talk. Flowers had faces. I was a giant among the world of my dolls. All fairytales ended with a marriage. But as an adult, marriage was the most dangerous thing I ever did to myself. As adults, what modern fairytales do we still believe? Pain does not inoculate us from more pain. Survival does not inoculate us from the guilt that others will not escape. Victimhood of one kind does not knock away other forms of privilege. As a white woman, I force myself to reckon with that daily, while I carefully construct imagery about healing, individual bodily autonomy, and collective peace.

Meg Lionel Murphy received degrees in Art, Art History, and English Literature from the University of Minnesota—Twin Cities, where she additionally studied classical oil painting in Florence, Italy. After college, Lionel Murphy worked as a children’s illustrator and co-founded a literary and art magazine, Paper Darts. She also helped to run the arts nonprofit, Pollen Midwest, that uses storytelling and art to explore social justice movements. After leaving her career in publishing to focus on painting, Lionel Murphy eventually moved to rural Wisconsin to focus on her art without distraction. Her artwork has been presented in exhibitions throughout the US, including 2020 solo shows “Interior Violence” at CoExhibitions Gallery (Minneapolis), and “Meg Lionel Murphy” online solo show presented The Untitled Space, as well as a number of group shows including at Public Functionary (Minneapolis), Jolby And Friends (Portland), Waiting Room Gallery (Minneapolis), and The Other Art Fair (Los Angeles). Lionel Murphy has been featured in a variety of publications including Bitch Magazine, Brown Paper Bag, MPLS Art, Mulieris Magazine, Neut Magazine, 360 Magazine, and The Untitled Magazine.

ABOUT THE UNTITLED SPACE 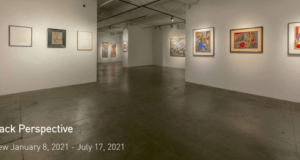 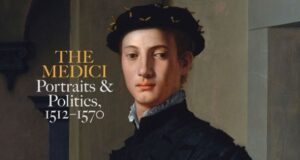 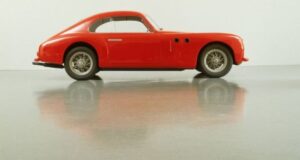 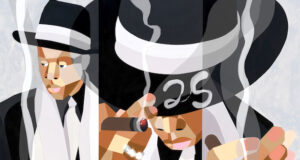 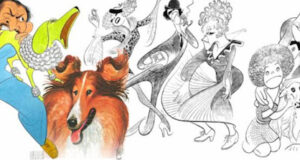