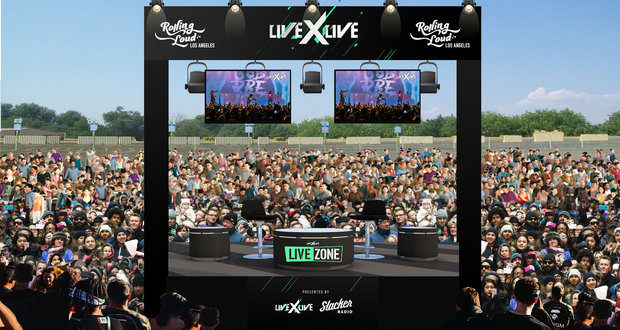 LiveXLive, a global digital media company focused on live entertainment, today announced that it would livestream performances and original content from the Rolling Loud Festival  at the Banc of California Stadium Grounds & Exposition Park on December 14 and 15, 2018.

The biggest hip-hop festival brand in the world, Rolling Loud’s LA lineup this year includes Post Malone, Lil Wayne, Cardi B, Lil Uzi Vert, Wiz Khalifa, and 21 Savage. The upcoming livestream continues a partnership between Rolling Loud and LiveXLive that kicked off with a successful livestream from the sold-out Bay Area Rolling Loud Festival in September 2018.
Founded in 2015 in Miami by Tariq Cherif and Matt Zingler, Rolling Loud is known for curating shows that bring the biggest names in hip hop together with underground and up-and-coming artists, spotting trends before they happen.

Following the success of the first Miami Festival — which last year drew 110,000 fans — Rolling Loud expanded to the Bay Area and Los Angeles. The inaugural events in both cities sold out, with the Bay Area show selling more than 10,000 tickets in its first 24 hours on sale.
In addition to performances, LiveXLive will create and livestream original content related to the festival, including backstage exclusives and artist interviews. LiveXLive will also debut LiveZone, a live on-site music show, at Rolling Loud. Hosted by entrepreneur and content curator YesJulz; Speedy Morman, on-air talent and editorial producer, Complex; Jazzy Brown, comedian and actor, and Complex Networks LA anchor Pierce Simpson, LiveZone will provide pre-show to post-show commentary, insight into the festival culture and community, and interviews and behind-the-scenes segments.
The Rolling Loud livestream can be accessed at https://www.livexlive.com/live-events/festival/rolling-loud-los-angeles, through the LiveXLive mobile and OTT apps for iOS, Android, Roku, Amazon Fire TV and Apple TV.

The stream will also appear on LiveXLive’s Facebook page and Twitch channel, Rolling Loud’s YouTube
channel (https://www.youtube.com/channel/UCxrr-B7ydfDYr4sqsxNg5WA/featured), and on
www.RollingLoud.com.

The start time and livestream lineup will be announced on www.livexlive.com and LiveXLive’s social handles and apps prior to the event.
A curated Rolling Loud station highlighting Cardi B is currently airing on Slacker Radio, which will exclusively live stream audio from the festival. A live video stream will also be available on Slacker during the event.
LiveXLive plans to stream more than 27 music festivals, concerts and other live music events across the globe featuring over 350 hours of live content during its 2019 fiscal year. The company continues to expand its offering, with original series programming, single artist concerts, and award show content.

About Rolling Loud
Rolling Loud is the largest hip Hop festival in the world. Co-founded by childhood friends Tariq Cherif and Matt Zingler (both named Billboard Hip Hop Players two years in a row) the two had been producing rap shows in South Florida for 5 years before launching Rolling Loud in 2015 as a one-day festival for 6,000 attendees. The Miami-based festival has since grown into a three-day event that draws 60k attendees from all over the world and in 2017, they expanded to the Bay Area and Los Angeles. In January 2019, they will launch their already sold-out Sydney, Australia festival, which sold 20,000 tickets in 38 minutes. Playing host to the genre’s biggest artists including Cardi B, Travis Scott, Post Malone, Gucci Mane, Lil Wayne, Migos, and many more, Rolling Loud is proud to be the biggest live brand in hip hop.