After enduring real-life battles within the cast,  Spartacus: Vengeance is back with a new leading  gladiator – and this means war.

Liam McIntyre has some loincloth to fill – figuratively speaking. This January hosted the premiere of the second season of STARZ hit series Spartacus, the lead role now being held by McIntyre. The show, which revolves around gladiators, slaves and Romans, and where blood is worn more than clothing, was a record setter for the network, and was highly anticipated in its long-awaited return. Modeled after the themes of blockbuster films Gladiator and 300 (only more naked), the premise was a natural progression from big to small screen. And with success always spurs a production to try to make a formula even more successful. This season, entitled Vengeance, picks up where the first, Blood and Sand, left off when Spartacus leads the slaves in rebellion against their master. 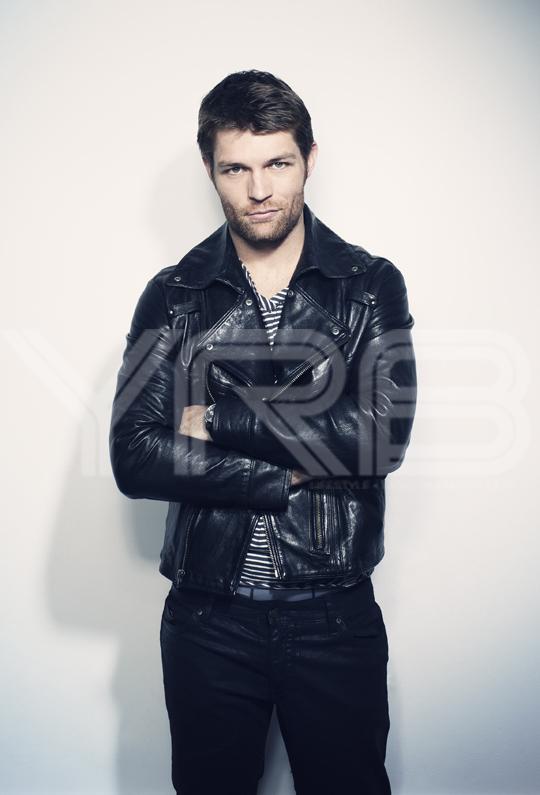 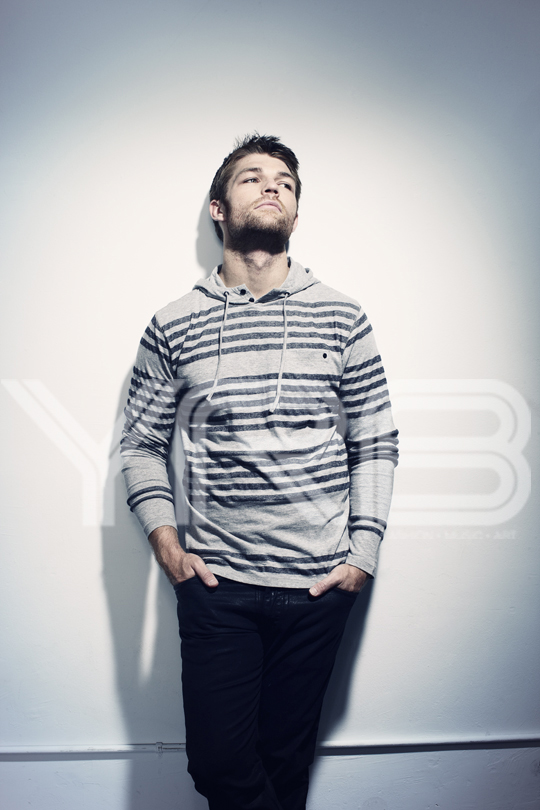 In a television arena where networks’ dramatic and comedic series have proven to be just as well developed and more popular than the films that grace the silver screen, STARZ threw their hat into the ring with Spartacus. HBO has always been a power player with the likes of The Sopranos, Oz, The Wire and Big Love, amongst others, while Showtime succeeded with Dexter and Californication and AMC exploded with Mad Men. STARZ never really had a show to be a contender with until now. As McIntyre kicks off his first season as the heroic warrior, the competition is sure to heat up and become quite the battle.“I love STARZ. They’re like a family. They work with everybody on a personal level and really support their shows,” says the 29-year-old. “They have a real respect for their shows and the people in the shows, and I think that bodes well for them and for each project.”After a successful debut season in 2010, Spartacus was put on hold due to the unfortunate diagnosis of original lead Andy Whitfield with early stage non-Hodgkin’s lymphoma. In reaction to the condition of its then-star, STARZ released a short prequel series in order to satiate audience appetites while the show was on hiatus. Despite promising hopes to continue the series with Whitfield, his cancer recurred and he was no longer capable of playing the title role. Truly respected by his costars, Whitfield humbly passed on the role to a new actor. The cancer never subsided in Whitfield and he tragically passed in September 2011, leaving the entire cast, including his successor Liam McIntyre, with wishes only to do justice to the amazing performances their real-life hero gave. “It’s a great responsibility to take over for Andy Whitfield. It’s a great honor to be entrusted with something so magnificent,” McIntyre says. “It’s going to be tough to do it without him because he did such a great job. I was a fan of season one and am a great admirer of Andy in general. STARZ said they weren’t expecting me to mimic or copy the Spartacus that Andy created. A lot of people think that may have happened, but they, and I, didn’t want to be a shadow or reflection.” 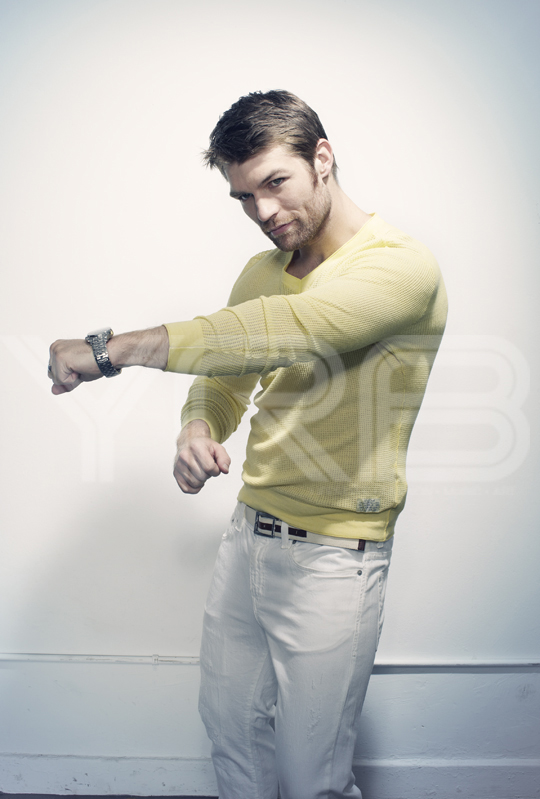 Ironically, McIntyre never realistically thought of pursuing an acting career, growing up in a small area of Australia. “I’m from Melbourne – well, technically, I’m from Adelaide, which is known as the least cool part of the country. I’m not sure why, but it just is. Some people call it the ‘City of Churches.’ I mean I’m cool with that, but people are always like, ‘Adelaide – such a shame.’” The Aussie had his hands in music and sports and later went on to Ireland to get a degree in commerce. He thought it was his calling – up until a desperate situation put McIntyre into a Shakespeare play. It was then that acting became an actual life choice. “I got tricked into acting. I never wanted to do it at all. I mean, not even a little bit,” he admits. “Then I was studying commerce in Ireland, and long story short, this Irish guy tricked me into acting in a Shakespeare play. They really needed help and were desperate. I tried that, and I think I was good. Never thought Shakespeare would have led me here. What’s crazy is that right around the time that I decided to pursue acting, Gladiator had just been released. And I thought, ‘Wow, that looks like the coolest role.’ I was like, ‘Man, why didn’t I audition?’ I would’ve done anything for that role.” Somehow ending up on the right path, years later, McIntyre will fulfill a role that Gladiator inspired. Spartacus takes the Gladiator ideals and sensationalizes them: requiring him to be prepared for vicious, vigorous battle scenes and provocative, sweaty sex scenes. Without a doubt, McIntyre must keep to a rigorous diet and workout regiment, as the nature of the combatant character will mean his body will always be in front of the camera.“Preparing for the role was really tough. It started with a lot of high intensity training: getting in the gym with my trainers, lifting weights, getting my weight up. I filmed the military training scenes in Australia while they were waiting to see if I could get into shape enough for them to say yes,” he recalls.  “And the head of stunts told this guy, ‘For the first couple of days just see where he breaks. See where he breaks.’ It was like, ‘I don’t know if I can do this, this is so hard!’ And after two days in a row it was like, ‘So this is what the human body is capable of.’ Once you get your body to a certain point, it’s like, perhaps you should continue what you’ve been doing or it’s a waste, ultimately. It’s discipline. But it’s one of the few things in life where you have tangible results.”

His initial hesitancy at bulking up stemmed from a lack of self-confidence. “I think deep down one of my biggest fears was, ‘Ugh,  I don’t like my body.’ But then it’s like, ‘Well you better get used to it because if you’re  going to make it in this business they’ll probably want to put your body on display,’” he notes. “Then I’m like, ‘Yeah, that probably won’t ever happen.’ In a weird way, it’s quite liberating to be forced to face your fears and then be forced to conquer them. And it’s kind of cool to be forced to get into shape. To be able to look in the mirror and go, ‘Hey, look at this new guy. I like him, he’s alright.’” 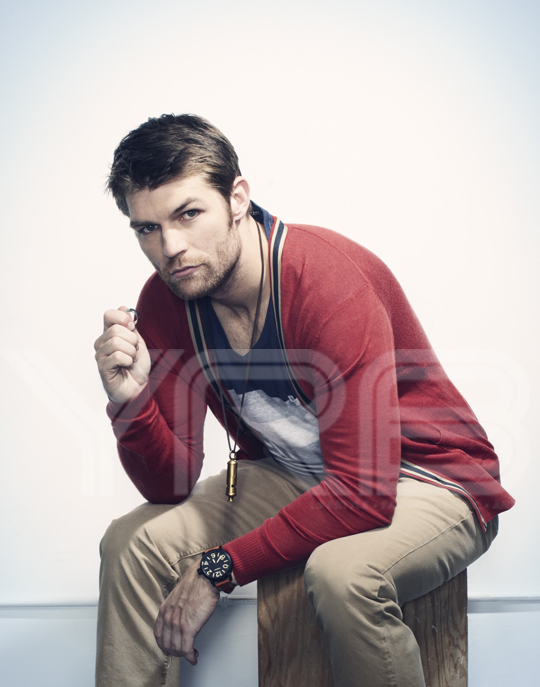 Now, all eyes are on McIntyre. Amidst the hype, he will be all over the media, something  he isn’t quite used to yet. As far as his past acting gigs, most of his jobs were in Aussie short films and theater. Now part of a hit series,  the new guy amongst a troupe of successful and engaging characters, McIntyre has graced multiple magazine covers, is making TV spots and attending premieres. In fact, he just made his first ever trip to New York City for this photo shoot. “I don’t think I’m anywhere used to the media attention yet. I’ve been [thinking] since I was younger, ‘I wish I had some way to make fans happy and it was kind of my job,’ and I guess in a weird way, I’m lucky to be in a position where I have the opportunity to make people honestly happy,” he says. “Seeing people waiting at the premiere to see all of the cast, to be able to make someone happy, generally in life, it’s a real honor in life. I feel entrusted with something really special to be able to actually influence that in some way. It’s nice to be able to connect something you do or a performance you give, to making people honestly happy.” 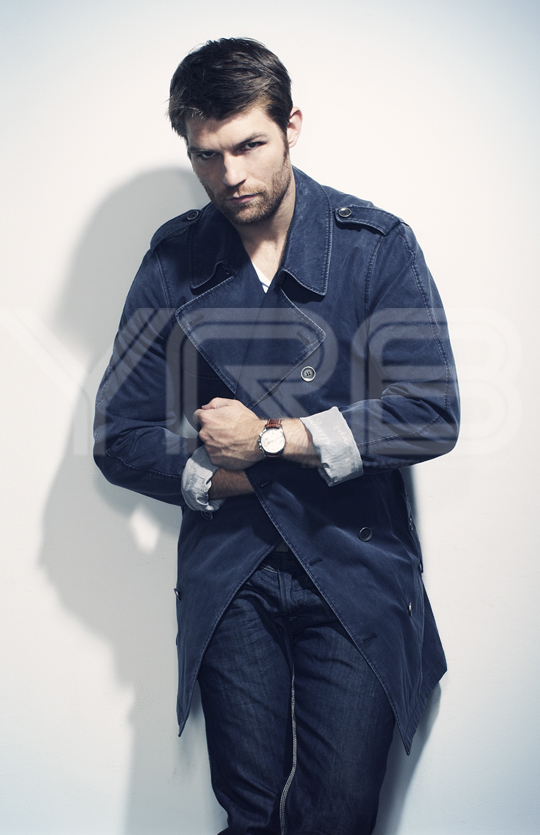 In this season of the show, McIntyre picks up the sword as the Thracian champion, having already successfully led the rebellion and escape from the house of Batiatus, the cruel and ambitious slave driver who so often used Spartacus for his gladiator talents and popularity. Now, Spartacus has vowed to bring even more uprising to all of Rome. Throughout the story, Spartacus held on to his virtue despite the constant corruption, betrayal and bloodlust that surrounded him. “This really is my dream role. This particular show and this particular role, as an actor, it’s something I would never have dared dream of in my whole career, let alone something to start with. It’s got great drama, I got to be all sexy and confident – I mean, it’s a dream role,” McIntyre confesses. “For me, the most important part of Spartacus’ character – and he’s an engaging character – is his humanity. Making sure he had that empathy. I love it. It forces me to have fun and it’s such an epic story. It’s got so many qualities that I’m so lucky to be able to portray.”