Skarstedt is pleased to present SPOKE TOO SOON, an exhibition of new paintings and sculptures by KAWS on view beginning November 5 through December 11, 2021 at Skarstedt 20 East 79th Street in New York City. 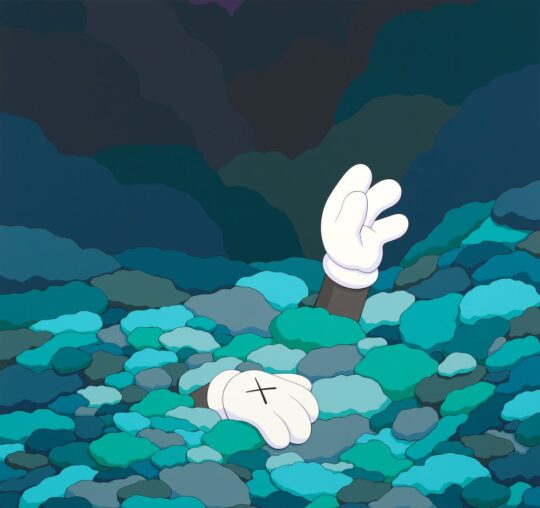 Within their familiarity and playful lineage, KAWS’ characters are synoptic in their evocations of human emotion – a departure from his colorful abstractions, these paintings offer new narrative possibilities for his beloved cast. Facing formidable challenges, CHUM and COMPANION inhabit harsh, claustrophobic landscapes, and despite trenchant reaches for survival, they are still caught in waves of isolation, danger, and doleful woes. Whether at the edge of a cliff or a breaking branch ensuing a fateful plunge, there are only brief respites, leaving us to commiserate with their exhaustion. 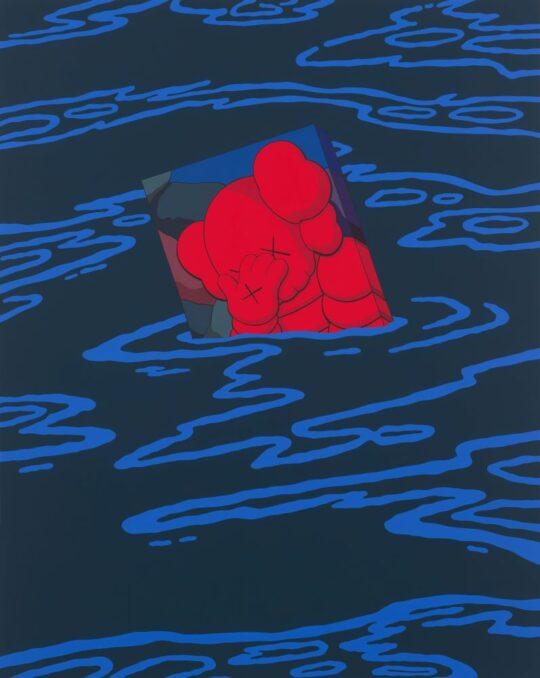 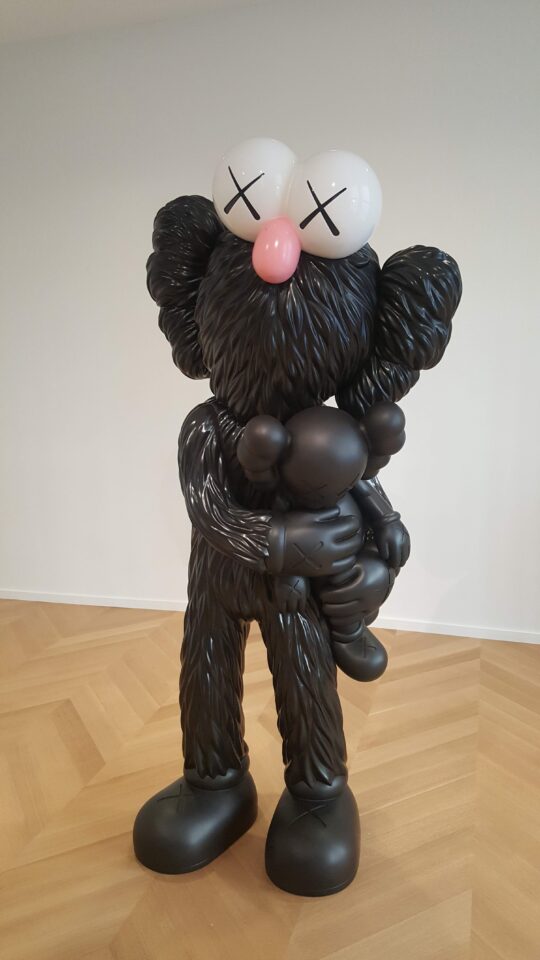 Not only revealing KAWS at his most pictorial, here his iconographic works also grow a sense of self-referentiality: a pink CHUM is seen painting a portrait of a red CHUM through the lens of a smartphone conceivably held by the muse. And with self-portraiture’s rich tradition of depicting artists beside easels, KAWS both confronts and contributes to this history – the scene shown again sans smartphone – all while the object within, the painting of the downcast figure, seemingly hangs in the room nearby. 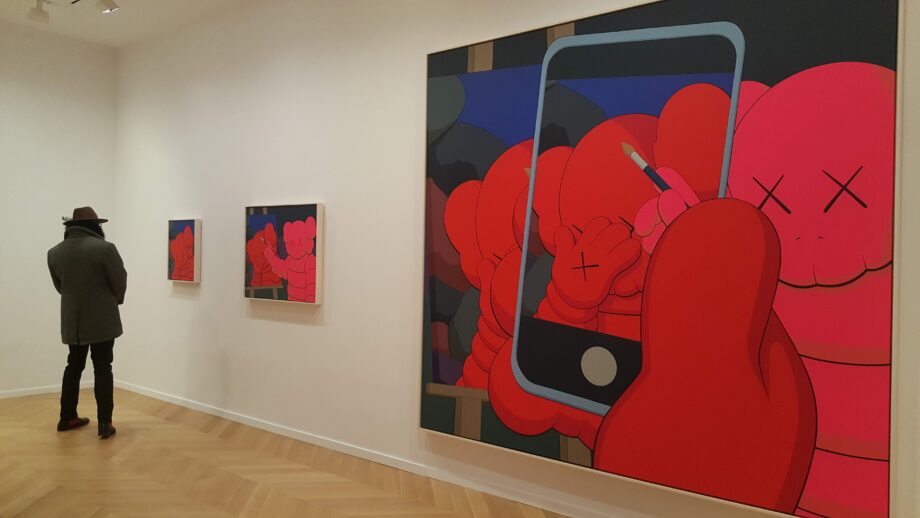 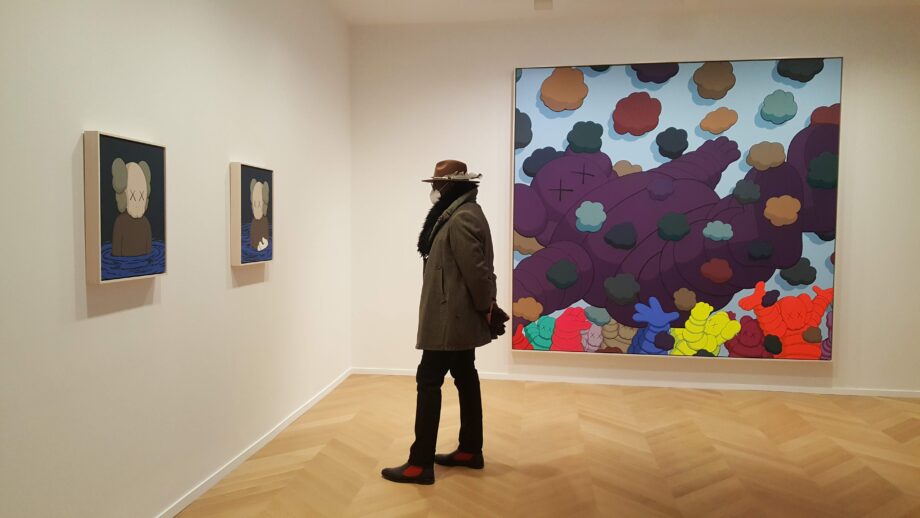 These notions extend to his works in bronze, TAKE and SHARE presenting two opposing circumstances. In the first, a protectively parental BFF holds a small COMPANION with fear and  mistrust, this dejection visibly transferred to the child; in the second, the characters’ roles are reversed, and the defensive urgency is lost on the listless, toy BFF. Face-down, COMPANION 2020 assumes a similar impassivity – prostrate and dispirited, KAWS’ new figure is flattened by the sheer weight of its exhaustive surroundings. 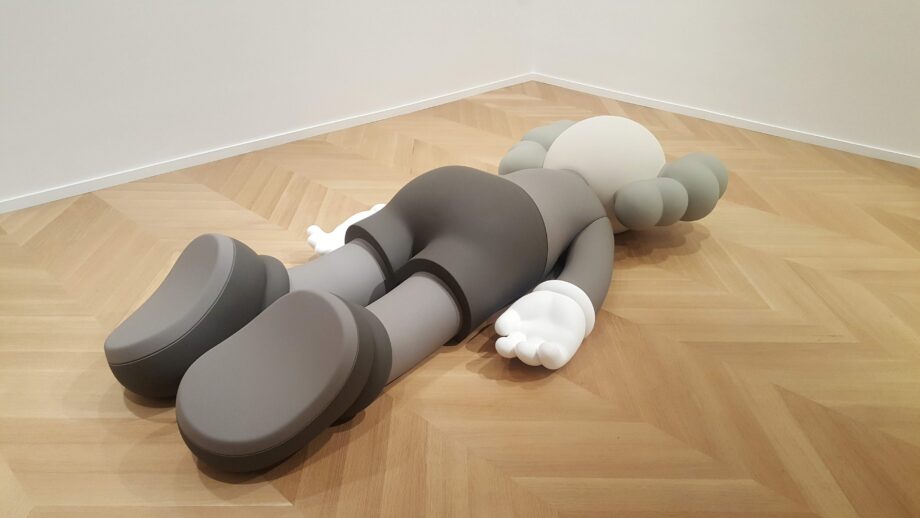 Oscillating between child and toy, subject and object, human and humanoid, KAWS’ cast of characters mirror a dispirited humanity, but nonetheless make room for a joyous celebration. 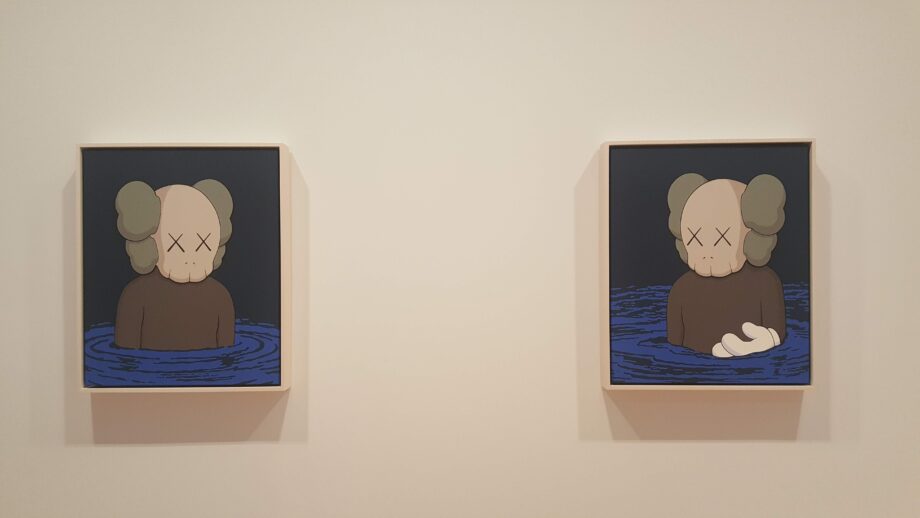 SPOKE TOO SOON is on view until December 11, 2021, at the Skarstedt Gallery located at 20 East 79th Street in New York City.

About KAWS Brooklyn-based artist Brian Donnelly (born 1974), known professionally as KAWS, connects with audiences far beyond those of the museums and galleries in which he regularly exhibits. His prolific body of work straddles the worlds of art and design to include paintings, murals, large-scale sculptures, street art, graphic art and production design. He has formed a unique artistic vocabulary for his work across various mediums. Over the last two decades KAWS has built an impressive following with work that consistently demonstrates his formal agility as an artist, as well as his underlying wit, irreverence, and affection for our times. His work connects with us on an instinctive and emotional level, resonating and engaging with contemporary issues. About Skarstedt Skarstedt was founded in 1994 by Per Skarstedt to present a program of museum-level exhibitions by contemporary European and American artists. Recognized for its critically acclaimed historical exhibitions, Skarstedt works closely with artists and estates to re-unite seminal bodies of work and offer focused surveys of pivotal moments in the history of twentieth-century art. Representing some of the most celebrated artists of their generations, Skarstedt also mounts ground-breaking exhibitions of new work, which continue to challenge the boundaries of contemporary identity. Skarstedt is committed to supporting and advancing the legacy of leading international artists by showcasing their work across its gallery spaces in New York, London, Paris, and East Hampton. The gallery works with the following artists and artists’ estates: Francis Bacon, Georg Baselitz, John Chamberlain, George Condo, Willem de Kooning, Carroll Dunham, Eric Fischl, Peter Fischli & David Weiss, Lucio Fontana, Günther Förg, Keith Haring, Jenny Holzer, KAWS, Mike Kelley, Yves Klein, Barbara Kruger, Robert Mapplethorpe, Juan Muñoz, Albert Oehlen, Steven Parrino, Pablo Picasso, Sigmar Polke, Richard Prince, David Salle, Thomas Schütte, Cindy Sherman, Rosemarie Trockel, Andy Warhol, Rebecca Warren, Franz West, Sue Williams, Christopher Wool, and The Estate Martin Kippenberger in collaboration with Galerie Gisela Capitain Cologne. 20 East 79th Street