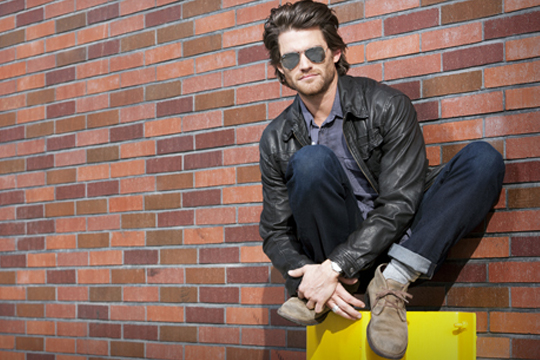 Johnny Whitworth has taken on his latest role with a vengeance, drawing from anything he deemed fit to bring out his inner villain in Ghost Rider’s Blackout.

Taking a strong interest in movies at an early age, Johnny Whitworth got bit by the acting bug before he even hit double digits and spent his time growing up in the South, plotting his Los Angeles move until it actually happened during his teen years. Even though he found an early hit in 1995’s cult classic Empire Records, Whitworth went on a brief Hollywood hiatus before appearing in The Rainmaker, Gamer and 3:10 to Yuma. After working with some of the big screen’s most acclaimed stars in recent years, like Bradley Cooper and Robert De Niro in Limitless, co-producing and starring in Valley of the Sun and becoming a familiar face on CSI: Miami, Whitworth has taken on Nicolas Cage in the latest film rendition of the Ghost Rider comic, which he promises will be a whole new experience.

YRB: How did you first get into Hollywood? Did you always want to be an actor? Johnny: Yes, definitely, from when I was like six years old, actually. My mom put me as an extra in the film North and South ‘cause it was filming in South Carolina where I lived at the time. She knew that I wanted to be an actor, and at that time, it was a “movie star” because I didn’t really know any difference. It was like I wanted to do what Eddie Murphy was doing, and HBO had gotten really popular, and there was Beta and VHS and Beverly Hills Cop was going off. So I wanted to do that, and then I kind of evolved a little later once I saw The Good, the Bad and the Ugly. I saw Eli Wallach taking a bath in that, him being really dirty, and it just seemed like it felt so great for him to get in the bath and then I was like, okay I wanna be an actor, like I understood what could be done with it.

YRB: Empire Records was one of your first films and it became a big hit. Did that early success come as a surprise to you? Johnny: No, ‘cause the cast was young, it was a fun movie. We had fun doing it and I think that translated to the movie.

YRB: You’ve played many different types of characters in your career. Has there been a favorite? Do you prefer a particular genre? Johnny: I haven’t done my favorite yet. I like ironic drama. I like a character that’s got a sense of irony in life and in being overly realistic. When I meet people like that I gravitate towards them because that is my sensibility. So when those opportunities [come about], where I can play those kinds of guys, I feel it’s intriguing. But I want to be able to do everything.

YRB: What can people expect from Ghost Rider: Spirit of Vengeance? Johnny: It’s a kind of wicked, badass ride. It’s a fun comic book movie with lots of action. I’m a fan of the genre and it was a pleasure being in it and playing the character that I played, and I love Nic. So you’re basically in for a wild ride, plus Nicolas Cage.

YRB: Was there a different approach to the sequel from the previous Ghost Rider? Johnny: Oh, absolutely. The first one, they didn’t even regard that one. The only thing that’s similar to that movie and our movie is Nic playing Johnny Blaze. And thankfully, ‘cause Nic is badass. But it’s a different tone in general; it’s darker, it pushes the limits. The other film – I kind of agree with it – Nic had said it was a ‘grim fairytale.’ He kind of categorized that. And this one is just wicked, hell, fire…it’s about a superhero sucking out soul, so it’s gotta be dark.