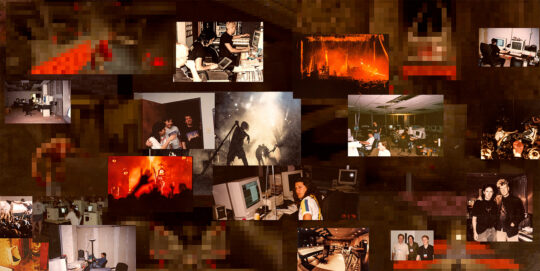 In hindsight it makes sense. A group of techno wizards working to open the digital gates to hell from within Suite 666 of a nondescript office building in Mesquite, Texas end up collaborating with a band of digital maestros occupying an old funeral home 500 miles away in New Orleans, Louisiana. Of course a Nail Gun would be invented so that the Nine Inch Nails “NIN” logo could be plastered on an ammo box full of nails.

We were all channeling an intensity, dysfunction, rage, excitement, and creativity which perfectly meshed in the final product. There really couldn’t have been a better soundtrack for those days of fast cars, violent deathmatches (both in the games and in real life), unbridled expressions of intelligence, ego, masculinity, curiosity, and discovery.

It all started with a fax. That anachronistic precursor to the digital wave upon which our games and music rode into the ‘90s. “Nine Inch Nails is coming to Dallas and the developers at id Software are invited to the show.” The id offices were frequent stage to Trent’s music. John and I would take turns blasting Pretty Hate Machine alongside cohorts such as Manson, Meat Beat Manifesto, and Depeche Mode. But there was something special about NIN’s music which even before the invite we knew to mesh with what we were developing.

“Them boys need to take their Ritalin,” muttered the cleaning guy as he swept up piles of broken audio and video cards from the floor outside Dave Taylor’s office. Myself, John Romero, and Sean Green, had just finished a round of “PC Card Ninja” – flinging discarded computer equipment at a sheet-rock wall until a hole large enough to fit a head through had been made. The game stopped when a flying video card nearly decapitated Dave.

At the show in downtown Dallas we were out of our element. Geeks in the mosh-pit. But we knew and loved the music and were excited to meet Trent for the first time. Coming backstage he was kind and humble. We were fans. He was a fan. We did an awkward round of “love your work”and promised to find a way to continue talking about games and music. At that moment I already had a sense we would work together and returned to the id studio full of energy and excitement.

The first trip to New Orleans was, like all the rest, surreal. Picked up at the airport by Chris “Podboy” Vrenna in his Volkswagen Cabriolet. Whisked through the streets of the Garden District towards the Nothing Studios on Magazine Street. “Anne Rice lives there,” said Chris as we passed Victorian mansion. “And that’s Trent’s place,” as he pointed at a neoclassical mansion.

The studio was a fun-house like something run by a deranged Willy Wonka. Filled to the brim with every imaginable electronic music toy and tool. There were a ragtag collection of collaborators and bands in league with the NIN crew. Charlie Clouser, Jeordie White (Twiggy Ramirez), and Manson materialized willy-nilly in the labyrinthine corridors of the building complex. “Work” on the sounds and music for Quake consisted of daily review of newly produced sound effects by the hundreds, a break to watch super-deviant porn until someone wretched, the production of child-like anthems and mini musical bits to be broadcast around the studio for the amusement of all, swamp tours, Cajun food, and marathon bar hopping across the watering holes of the French Quarter. Many an insane night ended at Checkpoint Charlie’s.

”Do you want a line?” seemed an odd question from the girl who’d just exited the bathroom in front of me. “Uh…” I walked back to the bar. “I think that girl just offered me cocaine.” To my side someone spoke in a “daddy knows best” voice. “Listen, American. Drugs are bad. Coke is bad.” Muffled laughter from the group. “You guys are full of shit,” I observed. Everyone laughed.

Those visits to New Orleans resulted in a collection of sound effects and music which lived out on the edge of what could be done with organic and meaty sounds in those early days of digital music. In much the same way the DOOM and Quake games pushed the boundaries of what the technology was capable of to render pixels representing the darkest depths of horror and pain. Earlier games and music lacked the fidelity to move you emotionally in the way Quake and its soundscape did. And later offerings became almost too literal, too shiny, too real.

In the dirty, fuzzy output from id and NIN was something perceived as sharper and more real than the individual bits. It required your brain to work and to fill in the spaces with imagined shadows and barely heard whispers behind a maelstrom of chainsaw buzzes and flying gore. The overt satanic tones gave way to a dark humor only achieved by those who are struggling in the abyss with novel tools to create something real.

After Quake and Quake II id began to change. The old guard were slowly replaced by a new crew. The connection to the grit of what made Quake and the collaboration with Nine Inch Nails so great was lost. The internal, personal struggles that lent energy to the creativity was supplanted by a corporate mentality of schedules, designs, deadlines, and guidelines. Rules were imposed. The chaos was replaced by order.

But this soundtrack remains as a reminder of those messy days of invention and exploration. 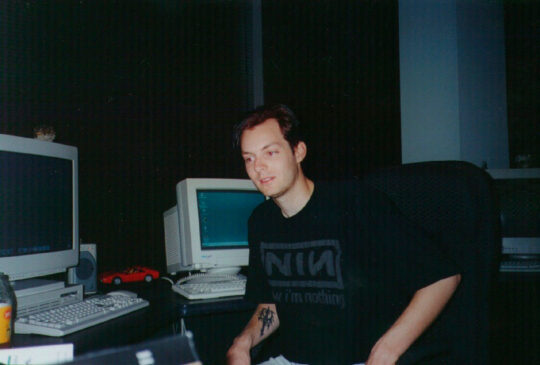 For a long time, computer games were the domain of the shut-in geek.  The required effort of imagination to believe that the little collection of dots moving around the screen was actually a mighty hero or terrifying monster made it easy for most people to dismiss the medium.

But then came Doom.

Suddenly, the broader world was seeing something that made an impact, even if you didn’t understand what was going on.  The violence and demonic imagery from a first-person view was key to the experience, but it wasn’t completely coincidental that it did a pretty good job of offending the easily offended.  We got to see congressional outrage tack from explicit song lyrics to violent video games, with senators waving copies of our games around on television.

The success of the game led to some surprising places, including picking up backstage passes labeled “DOOM” at the will-call window for a Nine Inch Nails concert.

The media heralded us as Rock Star game developers, and we did have some of the indulgent trappings of great success at a young age, but there we were talking about games with Trent Reznor, which really is a different sort of thing.

It was great to meet Trent and talk about our work, but what if we could actually involve him directly in Quake, the next big project?  That would be awesome!

The new lighting and level design capabilities were leading us in a direction even more dark and moody than Doom, and you could say we were already inspired by the Nine Inch Nails CDs in heavy rotation at the office.

While it is amusing to imagine Trent composing music for the chintzy FM synth sound cards of the day, we had a new tool available to us with the advent of CD ROM drives – we could run full quality music in the background while the game played.  Legal complications prevented the use of any vocals, but there was a wide-open field for building the soundscape of the game.

Over the course of a year, American McGee repeatedly made the trip down to New Orleans to work with Trent and his crew as they dove into sound effect creation as well as the background audio.  There wasn’t any real thematic arc to the game, so we had the freedom to mix and match the compositions with whichever levels just felt right.

As a final touch, we had “nail gun” and “super nail gun” weapons in the game, so with one more check of the lawyers, we also wound up with a NIN logo on the in-game ammo boxes.

Quake turned out to be a very difficult project to ship, due to both scope ambition and internal issues – the Rock Star game developers broke up at the end of it with the exit of co-founder John Romero.  Still, by almost everyone’s account, it is among the most influential games ever made, and it was a formative experience for a great many of the developers building the hits of today.

Several years and games passed, and Id Software eventually turned our attention back to Doom.  This led to The One That Got Away.  Trent was excited to work with us again on audio, and actually produced hundreds of megs of sound for the project before it all fell apart in negotiations with his then-manager. Everyone came out of it burned.

After over twenty years making games at Id Software, I moved on to work on virtual reality at Oculus.  In an odd bit of synchronicity, not long after Trent scored The Social Network, Facebook acquired Oculus. 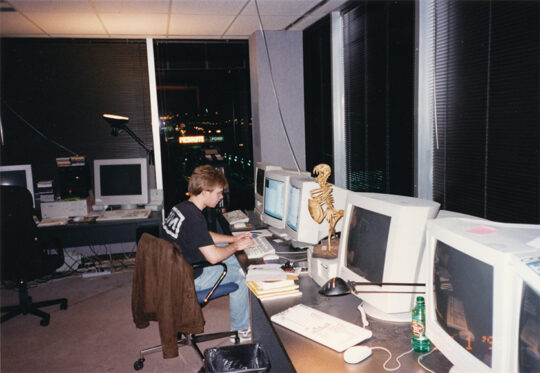 On the last Nine Inch Nails tour through Dallas, an invitation was again extended to my team, and I carried an early prototype VR headset backstage, where I enthused about the exciting potential of virtual reality for all sorts of creative experiences.  Our two brand new engineers were left wide-eyed: Work hard, build the future – and meet rock stars!

I’m still hoping to someday get Trent involved in building a seminal virtual reality experience that will leave a mark on people.  Maybe there will be another generation of retrospective liner notes when we are both pushing seventy.