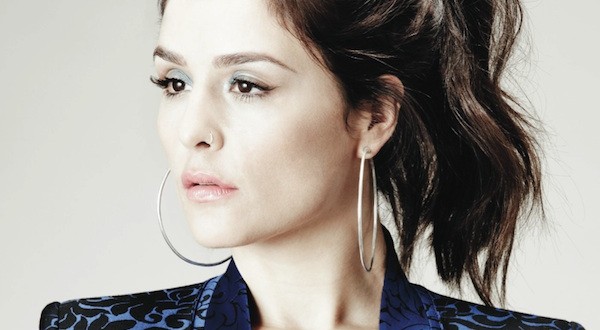 Posted by: Michael Menachem in Features

British soul singer Jessie Ware is making an impression on the U.S. with her emotive alto, poised vocal power and elegant presence on stage. The Mercury Prize-nominated artist recently wrapped headlining shows across North America including Coachella, she released a remix version of “Wildest Moments” featuring A$AP Rocky as well as a new single “Imagine It Was Us,” a bouncy, early 90s-inspired track off her newly-released album “Devotion,” which spawned several singles and became a Top 5 album in the U.K. last year.

On her records, in videos and on stage, Jessie Ware displays graceful vocal and stylistic elements of Sade, Whitney Houston, and even Enya, yet during a live performance the audience will get a taste of her witty, unapologetic personality, making her that much more relatable than your typical pop star.

Gathering herself after her first few songs at Music Hall of Williamsburg, Jessie got candid saying, “Probably all those bloody Girl Scout Samoa cookies I got yesterday cause I’m outta breath.” Later, following flirtatious 80s jam “Sweet Talk,” she blurted out “I’m shvitzing up here” while wearing an angelic, white robe-like coat. Most memorable of her live show, however was the precision and effortless way her voice floats across a room temporarily paralyzing audiences.

YRB: This album will hold the attention of listeners because it feels as if it were written in one breath or one idea. How long did it actually take to write and record?

JW: The songs on the album I wrote in under a year. It came out in August in the UK last year.

YRB: Do you notice any major differences between performing in the U.S. vs. the U.K.?

Travel. I feel a bit more like a pop star in America. And not because anybody knows me. It’s all quite fabulous and fun, it’s definitely probably because I’ve taken a while to come here. Maybe it’s a confidence thing ’cause I took a long time to get here. That girl at the front moving around last night [during recent Music Hall of Williamsburg sold out show] during the ballads – it felt like the girls in the class in “The Miseducation of Lauryn Hill.” They go for it a bit more. In other countries they gawk at you and stare at you where your hometown wouldn’t look you in the eye. They’re more confident in the U.S. that they feel like they can chat with you and I like a good chat.

YRB: You’re featured prominently on SBTRKT’s “Right Thing To Do,” which may very well be the first time fans discovered your voice. Could you speak to the re-emergence of electronic music and the clever moves by artists to seek out the best vocalists in folk, rock and R&B breathing new life into songs and building exposure for formerly unknowns? Are there any singers whose voices you are particularly smitten with?

JW: Well for me that’s where I started. The track wasn’t signed at the time – I also did “Nervous” with SBTRKT. I was told to go through a mutual friend. It meant I was able to get paid to go to clubs. It was brilliant and it was a really great learning curve for me. It was a genesis for me. It kick-started my career and I think those sort of collaborations can be great. I loved when Amber Coffman did it with Major Lazer. Channy from Poliça, she’s like in her own world when she performs. I’m pretty smitten with the Haim girls, and they’re so talented. I love the confidence in Danielle’s voice, it’s wicked.

JW: We changed the title and the sample. It was a love song to Big Pun, ’cause I love his song “100%” and I sampled him. It was me and [Julio Bashmore] in the studio and we were told we got it cleared on the album and it wasn’t actually cleared but already on the album. We had to change it to something else.

YRB: Where were you trained and where did you go to school? Did you play any instruments?

JW: I don’t play anything. I had an alcoholic piano teacher who put me off on that at Grade 3. I’m too bloody tired to cut my nails off to learn guitar. I got a really good education. I used to sing jazz in high school.

YRB: The single drum beat adds to the drama of “Wildest Moments.” Like many of your songs, regardless of tempo, it comes off as very atmospheric and peaceful. Is this particular song a reflection on a past love interest of yours or is it more open-minded or abstract as a concept?

JW: It’s about my best friend Sarah. We had an argument and it results in us not speaking. This was me saying that I adore her but we can be so up and down.

YRB: “Running” is perhaps your most 80s-driven single with the synth, the horns, the hi-hat, guitars, effects and of course the song’s pacing. The vocal is also so delicate and controlled. Do you have to get into a certain mindset to sing this one or any other songs on the album?

JW: I was definitely channeling Chaka and Whitney on this one. It was meant to be ever so slightly tongue in cheek. High drama and diva mode! I think sometimes it is good to get into a different mindset.

YRB: “Night Light” has a prayer-like message to it. It’s a hauntingly beautiful song, who decided to have strings included as well?

JW: I love strings but didn’t want to go mad with them on the first album and we also didn’t have the time or money for a string quartet so we used my producer’s friend who played the cello and layered it. I think I may have more for the next album though.

YRB: You worked a lot with Dave Okumu, a producer on “Devotion.” Where did the two of you connect?

JW: My manager met him at a BBQ and thought we would get on. I had seen him about in east London, DJing and knew he was in a great band called The Invisible. He was so important to me making the record and still is a dear friend.

YRB: You are a two-time BRIT Award nominee in a big year for Emeli Sandé, Alex Clare, Florence Welch, Mumford & Sons. Do you get nervous about media attention and awards?

JW: I’m quite surprised how many awards I was up for, my first time really being a singer. It was such a compliment. I don’t think I can get that stressed about it. I can have a good year and it’s really lovely. I never thought that would be happen to be nominated for an award, so I was really touched and honored. I was quite nervous on the red carpet hoping nothing would go wrong. You don’t want your dress to flow up. But the media attention has all been really positive to me, so I don’t feel like there’s any backlash. Hopefully I can carry on how I do and people will like it. I’ve had a really positive experience with the media.

Previous: ManMade
Next: Comedians in Cars Getting Coffee @JerrySeinfeld @SarahKSilverman