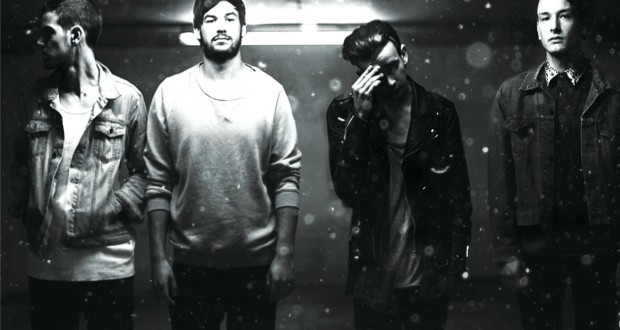 Posted by: YRB Editorial in Features

HAILING FROM A SMALL BRITISH TOWN OUTSIDE OF MANCHESTER (THE CITY THAT BROUGHT THE WORLD THE SMITHS AND OASIS), THE 1975 ARE TEENAGE FRIENDS WHO HAVE STUCK BY ONE ANOTHER AMID ALL THE MISCHIEF OF GROWING UP AS ROCKSTARS. THE BAD BOYS, LED BY FRONTMAN MATTHEW HEALY OFFER THEIR OWN PUNK AND NEW WAVE-TINGED SYNTH-POP, WITH A SOULFUL VOICE PLUCKED FROM THE BEST OF THE BEST OF 80S AND 90S R&B. HAVING OPENED FOR MUSE AND NOW FOUR EPS DEEP IN MUSIC, THE GUYS RELEASED THEIR SELF-TITLED DEBUT ALBUM SEPTEMBER 9, AN EFFORT THAT HEALY DESCRIBED AS CONSUMING HIS ENTIRE ADULT LIFE.

YRB: “Milk,” “Sex,” “Me,” “You,” “Chocolate.” I am curious about the one word song titles. Were they created through a conscious effort or did the songs just take on names and the one word titles stuck?

1975: I think it’s a natural evolution actually. I don’t know, I think “Sex” came quite soon, and I knew I wanted a song called “Sex,” I don’t know why. The song sort of preceded the title. We’re always careful of giving away too much of ourselves, that’s why everything is often in black and white and there’s a lot of solace in them. I think one word works.

YRB: You have such a variety of songs and it feels like a true group effort with all the sounds, effects, instrumentation. Do you all write the songs? 1975: We don’t really talk about it that much. Not for any fear of being clandestine or not to give the game away. I think the way that we write, me and my three best friends in rooms is so personal to me, it feels like maybe we don’t need to tell people that. It’s very much a collaborative effort. We all share the same vision and we’ve all been together for 10 years, since we were 13 years old. We have this stylistic vocabulary that you don’t get with bands that met at university or art school and their album comes out a year later. That’s bullshit, that’s not the way it works. We wouldn’t be able to exist without each other. We don’t really know anything else. Our band’s honesty comes into question when music comes out too fast. If people are into this band, they are making a genuine investment in our music. We were making this music before people even got interested so why would we even change?

YRB: Lack of identity seems to be a lingering theme in your music. Your band logo and imagery are largely black and white, it feels timeless and open-ended, do you think a lot of people can connect with this?

1975: Yeah, to some extent. I think about all the kinds of facets of our identity – the idea that when we first came out in theU.K., that ‘this band doesn’t know who they want to be. They haven’t got a fucking clue what they want to be.’ My answer to that was ‘a lack of identity’ is who you want to project. The fact that that is physically represented in our music, isn’t because we don’t know what’s fucking going on, it’s a reflection of who we are as people. We create in the same way that we consume. Nobody consumes anything in a linear form anymore. You have to be exposed to nothing. We have a post-modern album. We see ourselves as more of an entity, that’s a big stylistic polarity. But where we come from there’s a lot more coherence in our band. You could have Chris Martin singing over a Nas beat and it’s going to sound like Coldplay.