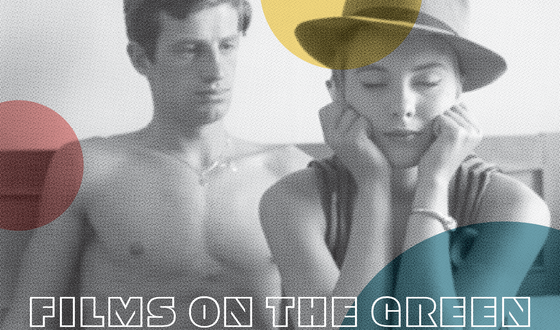 On Friday, June 10th, Films on the Green will screen The Tall Blond Man with One Black Shoe, one of the most seminal comedies of the 1970s, directed by Yves Robert (War of the Buttons, My Father’s Glory), with Pierre Richard (A Chef in Love), Jean Rochefort (Tell No One), Mireille Darc (Flic Story) and Bernard Blier (Monsieur Gangster).

A “talented physical comic” (Dave Kehr, The Chicago Reader), Pierre Richard stars in the film as François—the clumsy, daydreaming violinist-turned-spy—and hurdles through a plot laced with espionage, surveillance, and mistaken identity. Characters fall over each other in misguided attempts to discover François’ secrets, and storylines tangle tightly as Christine (played by Mireille Darc), a knock-out henchwoman, uncovers a previously concealed nuance of François’ romantic life. The story resolves with a showdown between inept and ridiculous spies, after a parade of side-splitting farces unfolds. Offering a superb panorama of 1970s Paris architecture and urban landscape and partly filmed at at-this-time-brand-new Paris’ Orly Airport, the film is “set in a modern glass and chrome Paris” (The New York Times).

The Tall Blond Man with One Black Shoe, “a 90-minute testimony to the French love for Jerry Lewis” (Dave Kehr, The Chicago Reader), has won the 1973 Silver Berlin Bear at the Berlin International Film Festival as well as the National Board of Review Award for Top Foreign Films.

The screening will take place on Friday, June 10th at 8:30pm at Washington Square Park. The film is in French with English subtitles and is free and open to all.

The screening is presented in partnership with Washington Square Park Conservancy.

A frothy French farce, The Tall Blond Man with One Black Shoe is a classic madcap comedy about espionage, surveillance and mistaken identity. When Francois (Pierre Richard), an unsuspecting violinist, is misidentified as a superspy by national intelligence, outrageous antics ensue. As everyone (including Mireille Darc, playing a knock-out henchwoman) falls over each other in their misguided attempts to discover the tall blond man’s secrets, his best friend complicates matters even further when he overhears a salacious recording of Francois with his wife. The whole merry-go-round comes crashing to a halt in one final showdown, pitting spy versus supposed spy with hilarious results.

2016 Films on the Green Festival Schedule

The festival offers this year a striking portrait of the City of Lights, its urban landscape, and cultural diversity. A selection of classic, New Wave, and contemporary films will showcase the city’s aesthetic, cultural, and cinematic history from a dramatically unconventional angle through stories of love, romance, adolescence, female identity, and urban life in Paris and its surrounding suburbs.

All films are shown with English subtitles. Screenings begin at 8:30pm, except the Columbia screening, which begins at 7:30pm.

The Cultural Services of the French Embassy, FACE Foundation and the City of New York Parks & Recreation would like to thank Films on the Green’s 2016 official sponsors: Air France, BNP Paribas and TV5 Monde.

Tandem Paris-New York 2016 is a large-scale transatlantic cultural exchange between Paris and New York. From June through October 2016, cultural institutions in New York and Paris will present an extraordinary selection of events in a variety of cultural disciplines including music, dance, cinema, literature, theatre, the visual arts, language, gastronomy, and digital innovation from the partner city. Tandem Paris – New York 2016 is organized by the City of Paris and the French Institute, in partnership with the Cultural Services of the French Embassy in the United States and the Embassy of the United States of America in France, with the support of the City of New York.

The Cultural Services of the French Embassy promotes the best of French arts, literature, cinema, digital innovation, language, and higher education across the US. Based in New York City, Washington D.C., and eight other cities across the country, the Cultural Services brings artists, authors, intellectuals and innovators to cities nationwide. It also builds partnerships between French and American artists, institutions and universities on both sides of the Atlantic. In New York, through its bookshop Albertine, it fosters French-American exchange around literature and the arts. www.frenchculture.org

FACE Foundation is an American nonprofit organization dedicated to supporting French-American relations through innovative cultural and educational projects. In partnership with the Cultural Services of the French Embassy, FACE promotes artistic, literary and educational exchange and collaboration between creative professionals from both countries. With additional corporate, foundation, and individual support, FACE administers grant programs in the performing and visual arts, cinema, translation, and secondary and higher education, while providing financial sponsorship to French-American festivals and other cultural initiatives. FACE focuses on new and recent work of living artists and the promotion of bilingualism and the French language. FACE Foundation (French-American Cultural Exchange) is a 501(c)(3) organization chartered by the state of New York. www.face-foundation.org

NYC Parks is the steward of approximately 29,000 acres of land — 14 percent of New York City — including more than 5,000 individual properties ranging from Coney Island Beach and Central Park to community gardens  and Greenstreets. We operate more than 800 athletic fields and nearly 1,000 playgrounds, 550 tennis courts, 66 public pools, 48 recreational facilities, 17 nature centers, 13 golf courses, and 14 miles of beaches. We care for 1,200 monuments and 23 historic house museums. We look after 650,000 street trees, and two million more in parks. We are New York City’s principal providers of recreational and athletic facilities and programs. We are home to free concerts, world-class sports events, and cultural festivals. www.nycgovparks.org