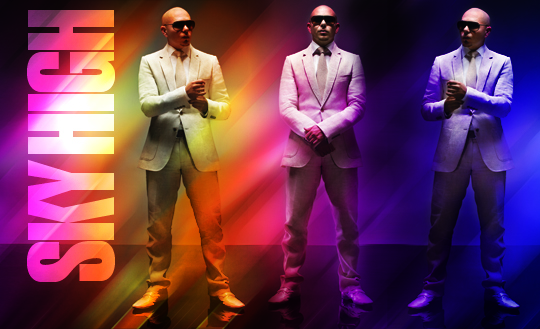 From Mr. 305 to Mr. Worldwide, Pitbull has not only helped solidify Miami as an East Coast music hub, but he’s expanded his reign to beyond global confines – most recently landing on Planet Pit.

The overexcited Pitbull who chanted “Culo!” on his 2004 debut single is far from the suave rapper he is today. The Miami native, born Armando Christian Pérez, has released six albums since dropping his Lil’ Jon-approved debut, M.I.A.M.I. (Money is a Major Issue), evolving from a chanting, rabblerousing underdog to a chart-topping and charming businessman, rarely seen rocking anything other than a suit.

But don’t get it twisted. If Planet Pit sounds like it was built for mainstream radio, that’s because Pit wanted it that way. Known for adapting to the times, the Cuban-American opted to focus on perfecting songs in a market where shelling out 99 cents for a single trumps splurging on an album’s worth of filler.

“The goal for this album was for each song to be a potential single,” he admits, addressing criticism that he’s a “singles artist.” “We do live in a singles market. I think for people that have that mentality honestly don’t know my track record and how I’ve been in the game for so many years. They just think now is the beginning of my career, and the rest was just years in training. But I have learned from and studied the game a whole lot, and I think I’ve mastered it by this point. I’m definitely a great student.”

The approach has paid off, solidifying his reign as “Mr. Worldwide,” his self-proclaimed nickname (formerly “Mr. 305,” Miami’s area code). “Hey Baby (Drop It to the Floor)” featuring T-Pain, the LP’s first single, became his third U.S. top-10 single, while “Give Me Everything” featuring Ne-Yo, Afrojack and Nayer shot to the top of the Billboard 100 chart, scoring additional number ones in Canada, Belgium, Ireland, the U.K., Spain and beyond. Given the track record, his pending single “Rain Over Me” featuring Marc Anthony is destined for chart greatness.

The success has been set into motion, but what about his rap roots? Originally under the King of Crunk’s wing, he’s made the crossover to pop that most artists would kill for – but have his hip-hop beginnings been dismissed? “I just consider myself an artist where I’m able to bounce around and tap-dance in different cultures, different genres – even different countries,” he explains, name-checking Nas, Lil Wayne, Jay-Z, Notorious B.I.G. and 2 Live Crew as influences. “That just goes to show that I don’t like to consider myself a pop artist, or that I’m this type of artist. At the end of the day, I love to make music and whatever genre or category that falls upon it, I’m just happy to be there.”

Noticeably absent, though, is a signature part of his style. Known for infusing hits with the Spanish language, Pit docks his bilingual tendencies and raps entirely in English, claiming that his November 2010 release Armando was strictly for his Latino audience and that Planet Pit was intended for a broader listenership. It’s a red light for longtime fans, but diversity is at play. 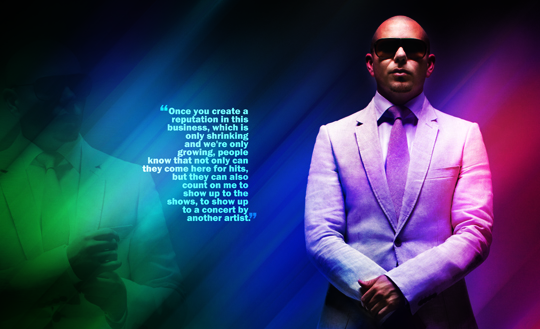 “Running all through the Latin market and doing all the award shows and things like that, I felt that I didn’t want anybody to get confused when they went into the store. I wanted to give them an all English album,” he says, explaining that he hasn’t turned his back entirely on his Spanish-speaking fan base. “I just had a Spanish album. If not, you would have more Spanglish now.”

Chalk it up to his move towards global domination. Arguably the Miami king (he’s got a key to the city to prove it), Pit has expanded his reign from the East Coast by barreling through international divides. Formerly relegated to rap and reggaeton audiences, he’s become a worldwide phenomenon thanks to gigs in Dubai, Jakarta, Cambodia and Singapore. According to Pit, his switch in nicknames says it all.

“As far as Mr. Worldwide, they hear about me [internationally] for the simple fact that I am worldwide,” he says. “When you’re performing in places I can’t even pronounce, to be honest with you, all around the world, that’s where Worldwide comes from. That’s what allows me to make global music.”

Despite the planetary success, he’s still humble. He admits to being flattered on small and grand scales: once by Hulk Hogan, who sang his praises (“I was like, wow! You’ve got to be kidding me!”), and another time at a concert in Southeast Asia. “When I performed in Cambodia in front of 40,000 people and they’re singing records word-for-word – and they don’t speak English or Spanish – I was like wow. Music really is the universal language.”

Even though he’s topped charts and rocked stages around the globe, his heart is still in Miami. With the gradual rise of fellow Floridian artists like DJ Khaled, T-Pain and Rick Ross, Pit has moved outside of 305 by bringing Miami culture to foreign territories. His East Coast mentality and style has impacted clubs and venues across the world, a reflection of his hometown’s diversity.

“In Miami, there’s no way you can shake culture. You always run into culture one way or another,” he says. “Miami’s a melting pot, literally. When you have all this culture around you, it allows you to think with an open mind. It allows you to think out the box. And that’s why we call Miami Pandora’s Box.”

Pit claims that he’s witnessed clubs in Dubai imitating the look and atmosphere of South Beach hotspots. But nothing compares to where he cut his teeth as the life of the party. “When you go to Miami, you don’t know if you’re in the United States or you’re in another country,” he notes. “I think that Miami has grown in 25, 30 years, probably the quickest out of any city in the United States of America, maybe in the world, if you go there, to have such an impact globally. When you look at it from the streets and criminally and from the drug game to the business game to the tourist game to the women game, all across the board, one way or another, we’ve made history. And quickly.” 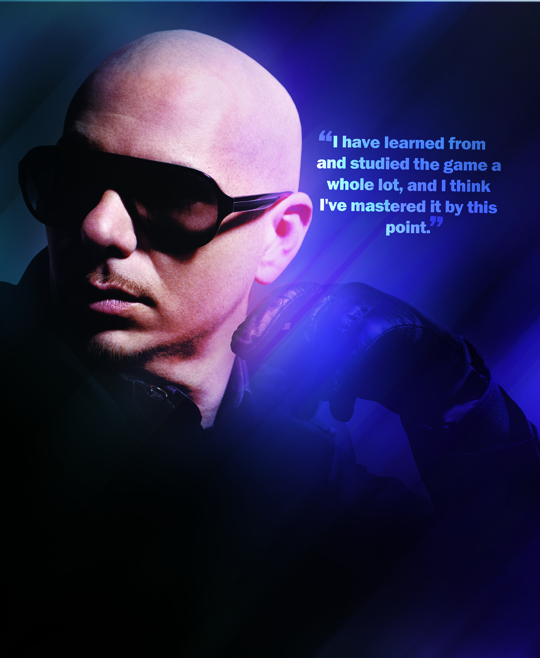 Having mastered Magic City and beyond, Pit is now focusing on building his brand. Outside of music, he’s assembled a line of endorsements. On the digital tip, fans can log onto his social networking site PlanetPit.com or download his Planet Pit app, where they can view behind-the-scenes footage from the making of the album. Even if you aren’t a Pitbull fan, you could enjoy sipping on his Voli Vodka, which he claims is the “first low-calorie liquor to ever hit the market.” Need a boost? Try his Sheets energy strip, the product of a partnership with LeBron James that’s meant to serve as a substitute for

Sharpening his business acumen, Pit most notably signed on the dotted line with Dr. Pepper, followed by a deal with Kodak to be part of “So Kodak,” a global marketing campaign that also features Rihanna, Drake and Trey Songz. Having worked with the camera conglomerate and seeing how it’s branded itself, Pit’s taken notes and is ready to cash in on his own likeness.

“The goal is to put the brand as a strong brand, like a Kodak,” he says. “I want to be able to have a marketing firm or a consulting firm where you have equity in any company that you’re involved in and you have the resources to your brand next to it, just for the simple fact that you’re working with another company and you already have the infrastructure to make their product global. So that way, you can have five, 10 companies out there. Maybe three to four are the ones that go, but every year, getting constantly involved in start-ups in one way or another.”

Lofty goals, but the key to getting there is “staying humble, working hard, doing good business and creating a reputation.” He cites Boardwalk Empire as inspiration, quoting, “It takes a lifetime to build a reputation, and only a couple seconds to destroy it.” He hangs his credibility on his consistency, asserting that fans will keep coming back to him if they know he’ll be waiting for them.

“Once you create a reputation in this business, which is only shrinking and we’re only growing, people know that not only can they come here for hits, but they can also count on me to show up to the shows, to show up to a concert by another artist,” he continues. “A lot of people do records with artists and the artist really thinks that they’re just that hot and don’t do good by other artists or by the company or a corporation [they’re working with] or whatever it may be. I think definitely the key is staying humble, good business and working hard.”

But that doesn’t mean he’s turning his back on his career’s foundation. With Planet Pit bowing at No. 7 on the Billboard 200 chart in its first week, Pit simultaneously bested Adele’s “Rolling in the Deep” for the No. 1 spot on the Billboard 100 Singles chart with “Give Me Everything.” While he’s already established his own planet, the sky isn’t even the limit.

“I’m looking for the next movement as we speak, thinking of what’s going to be the next thing in two, three years from now. Just know that I’m thinking about it already, even though we haven’t even started yet,” he says. “I think Planet Pit is my biggest album and I think it shows a lot of growth and evolution in the music game. I think what we set our goals to be is exactly what we accomplished with this album. Now, the question is, what are we going to do for the next one?”