See You Yesterday is a genre-blending drama that utilizes time-travel to examine the current issue of police brutality in America. YRB Executive Editor Jonn Nubian sat down with the Director/ Co- Writer Stefon Bristol, Co-Writer Fredrica Bailey and the cast, Eden Duncan-Smith, Danté Crichlow, and Brian “Stro” Bradley during the 2019 Tribeca Film Festival to discuss the making of the film. 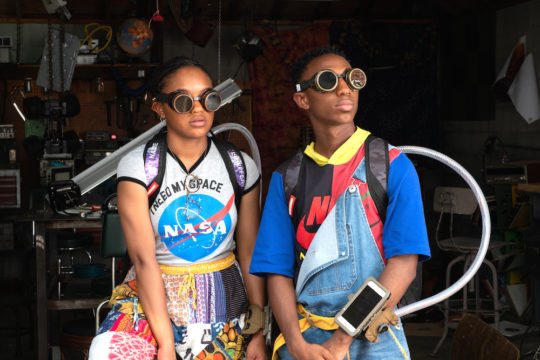 YRB: See You Yesterday was a short 17-minute film. How did you expand it to a feature?

Stefon Bristol: It was always our plan to do the film as a feature. We did the short in order to raise capital provide a proof of concept for a feature film.

YRB: For Eden and Danté, how did you grow your characters grow from the short film to the feature?

Danté Chrichlow: I had to draw from personal experiences that were happening outside of the film. So while Sebastian was going to police brutality, there were encounters with the police that happened with me personally that I had to bring to the character to humanize him more. Also Eden and I have known each other our whole lives. After the short film, our relationship just got stronger. 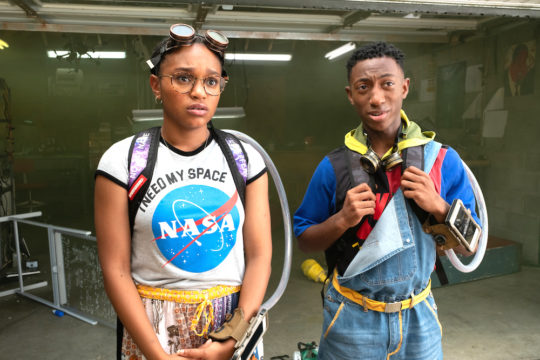 Eden Duncan-Smith: I had an experience with some police officers back in school since we shot the short film. I think I carried that with me and that definitely helps with the character CJ.

I’m also a physics major so I had that knowledge to bring to the table also. I just got a lot closer to CJ since the short film.

YRB: What was it like building a rapport between your characters?

Eden Duncan-Smith:  I’m a hothead, and Dante always tries to make me smile. He’s always there for me and always trying bring the joy into my life. So I definitely appreciate that and it definitely shows on screen.

Brian “Stro” Bradley: For me personally, I was just glad to be a part of the project.

It just felt very welcoming and there was good energy on the set in general. Everybody was just there to do this best. That’s what you see on film too. Everybody plays their part really well and when you have that, you get a certain level of like excellence! So I was glad to be part of that.

YRB: How did you develop the Big Brother Little Sister dynamic? 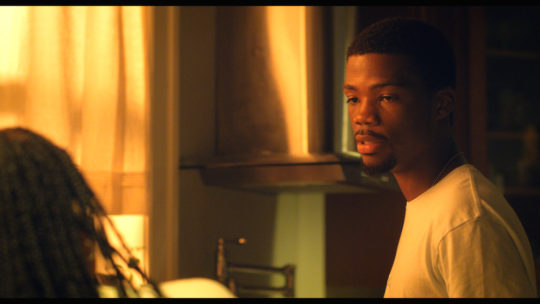 Brian “Stro” Bradley: I have a little sister in real life. She’s about to turn 18 in November so our relationship is very similar to my relationship with CJ on screen. I really tapped into that and also being from Brooklyn where we filmed the movie, it just it felt like I didn’t have to try too much.

Eden Duncan-Smith:  CJ Walker just pushes a lot of buttons. Female Nerds are more likely to be quiet in the corner of a room. CJ is definitely not! She is a black female scientist, wears bold colors and has braids in her hair. 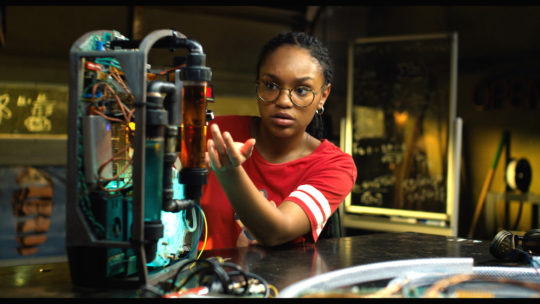 She doesn’t have a father figure and comes up with all of these ideas herself. I think she just really pushes boundaries in so many great ways, and I hope it influences girls to be more out there and not feel like they have to pull back because of what the world is pushing against them.  I’m a physics major at Hampton University and it’s been hard being in STEM field as a black female. Shooting the movie definitely helped me come back to school with a different outlook on how I could approach those setbacks or what people try to impose on me. So I definitely think CJ is very inspirational in that way.

YRB: What was it like working with Michael J. Fox?

Danté Chrichlow: Wow, he is amazing! The improvisational work that he has on a set is ridiculous. There were things that he added like the “Great Scott” that he says, is NOT in the script.

Eden Duncan-Smith:  He’s amazing to work with. Yeah. He does try to make everybody comfortable and definitely wants everybody to feel like this is a welcoming space.

YRB: What was it like working with your director Stefon Bristol?

Danté Chrichlow: He was always trying to make the process on set like a family. The shoot was very family orientated. He was always making sure that we were okay, texting us the night before and after the shoot, asking us if we needed anything. Stefon always made sure that it was a safe and collaborative environment and he was always available and I appreciate that.

YRB: Was having an expanded view of East Flatbush Brooklyn and including Michael J. Fox a part of the plan when developing the short film into a feature?

Stefon Bristol:  It was all a discovery process. With the short we said what we needed to say.

I brought in my personal experience of growing up in Brooklyn with West Indian parents and poured all of that into the script. I worked with Frederica to make sure the characters would work and that the science was working too. She brought a lot of great thing into the process as well.  In regards to Michael J. Fox, we were trying to get Neil Degrasse Tyson to play the role, but he was unavailable.

We had less that 2 weeks to figure out who would play the role and one of the producers suggested Michael J. Fox. I was like “do you think we can get him?” (laughter).

We sent him a letter and he accepted. On the set I asked him what did he think of the script.

He said, “I didn’t read it. I wanted to be a part of the movie based on the letter you wrote me.”

YRB: How did you use Time Travel in the film beyond the science?

Stefon Bristol: I’m tired of movies about black teenagers in the hood dealing with drug violence or gang violence. Or movies where they want to be a musician or basketball player. Nothing is wrong with those aspirations, It’s just very redundant. During the discovery process of this film I was trying to incorporate time travel in the story a different way. 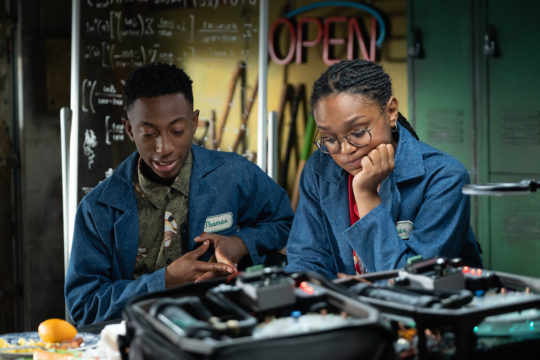 Would it be a portal or did someone else invent the time travel devices? I decided let THEM do it, I’d never seen that before and it shows a different side of what young black kids growing up in the hood do. I grew up in Coney Island. I have friends who are into tech, anime and kinds of other things that the quintessential black kids are supposed to be into to. There is no one rule in blackness and their portrayal in the media.

YRB: I fixed and sold computers when I was younger! (laughter) How long did it take to get this project completed from the start to finish?

Stefon Bristol: 5 years from conception. 3 years for the short and a 2-year process for the feature. It was trail and error all the way through. I knew I hit gold when I would start pitching the idea to random people. Spike Lee read the script and said he had never seen anything like this before. I decided this would be my thesis.

NYU film school is a 5-year program. I was trying to finish in 4 years because I didn’t want to take out more loans. I tried to do the project with some other producers who were really interested in themselves and not the overall project. By hooking up with the wrong people it turned into a really bad experience. I stopped production and ended up firing them all.

I cried for a week and then started over.

I sought out a co-writer and found Frederica. She is an impeccable writer and she is a black woman. We wrote the short together, she really helped simplify the script. There were 5 time jumps and she narrowed it down to 2. The short became very successful in over 35 film festivals around the world and won numberous awards including the prestigious HBO Short Film Award. Spike Lee was always supportive of the film and one day when I was working on the first draft of the feature, he sent me an email that said he wanted to be a producer on the project.

YRB: Frederica, What was your experience?

Frederica Bailey: When Stefon first interviewed me he was really formal and intimidating.

I had to really impress him and luckily I got the job. From there we just really connected and shared a lot of the same interests. Our writing style is very similar. It just all really connected, and Spike was super supportive, right behind us the whole time and very much involved with notes, drafts and just pushing us along.

YRB: Why go with Netflix? Why not stick with HBO?

Stefon Bristol: I had that talk with Spike. He said, “That’s a TV channel. We don’t make movies for TV”. He wanted this to be a studio movie but I was planning to raise the capital of my own. Netflix allows a lot of filmmakers and first-time filmmakers to do their own thing and not meddle it the process. I felt like HBO would have meddled in it and and not allowed me to have my own voice. Netflix allowed me to have that voice…with fights. (laughter)

YRB: Were there some things you wanted to shoot that didn’t make it into the final cut? 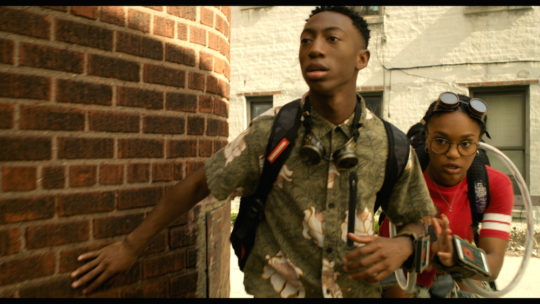 Stefon Bristol:  I’ve already made a sacrifice in this very beginning where there was a  comic book shop scene where the kids were playing Yu-Gi-Oh just to introduce CJ.

It hurt because like I go to that comic shop all the time! That’s Bulletproof Comics in East Flatbush. My editor, shout out to Jennifer Lee, a wonderful wonderful woman. She challenged me to “kill my darlings” as filmmakers like to say. There is a beautiful scene between the mother and the son, it was a very funny scene but we had to take that out. In the editing room it’s hard because we sacrificed a lot. I saw this beautiful documentary, Meet the People Building Their Own Internet in Detroit, from the series Dear Future , where young people are provided the elderly free internet. It inspired me to do that scene in the garage, having them fixing computers and cell phones and showing a new way to hustle. I had to fight to keep that in.

YRB: Explain the use of the famous Spike Lee dolly shot in one scene, was that a homage to Spike?

Stefon Bristol: I asked Spike if I could do it and he didn’t respond (laughter). I couldn’t figure out any other cinematic way to show her despair after seeing her best friend getting killed during a very unsuccessful Time Jump. That shot was perfect. So I was like fuck it, we’re going to do it. It’s definitely a homage to Spike! 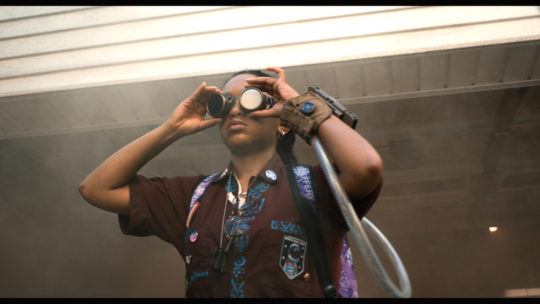 YRB: What is it like having See You Yesterday premiere at the 2019 Tribeca Film Festival?

Stefon Bristol: I love my city of New York. I think Tribeca is a beacon of independent filmmaking and it hurt me a lot when our short film was rejected. Having the feature film in the festival is such poetic justice! The premiere last night was fantastic. I was very happy that people liked the film.

See You Tomorrow is now streaming on Netflix. Click here for more information 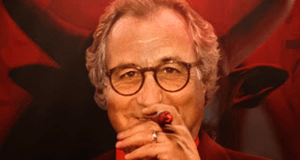