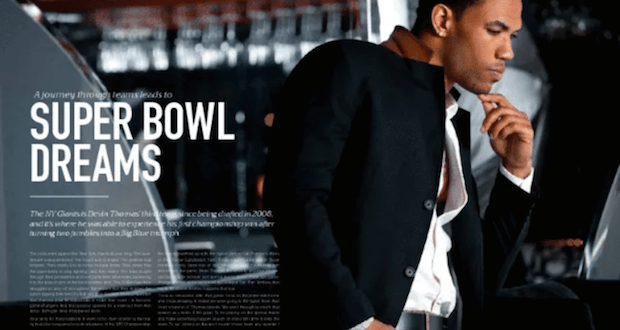 The NY Giants is Devin Thomas’ third team since being drafted in 2008, and it’s where he was able to experience his first championship win after turning two fumbles into a Big Blue triumph.

The odds were against the New York Giants all year long. The quarterback was questioned. The coach was criticized. The defense was hobbled. They nearly lost to rivals multiple times. They never had the opportunity to stop fighting – and they didn’t. The team fought through their persistence and overcame their adversities, squeezing into the playoff race at the best possible time. The G-Men had their struggles on and off throughout the season, but they entered the dance playing their best football yet. It’s in this high level competition that chances arise for individuals to make their mark – to become game-changers. And that window opened for a wide-out from Ann Arbor, Michigan. And it happened twice.

It’s a rarity for that possibility to even occur. Even scarcer is the reality that it be conquered in both situations. In the NFC Championship, the Giants matched up with the higher ranked San Francisco 49ers at their home Candlestick Park. It was a tight battle, and in those contests it only takes one or two breaks to sway the momentum and, in turn, the game. Devin Thomas, the recently acquired 24-year-old Giants wide receiver and special team’s threat, made two game-changing plays as he recovered two integral San Fran fumbles that led to NY scores. It never happens that way.

“I was so exhausted after that game. I was on the plane ride home and it was amazing to realize we were going to the Super Bowl. And I had a hand in it,” Thomas reveals. “We went through so much that season as a team. It felt great. To be playing on the special teams and make something happen at such an important time to help the team. To be ‘Johnny-on-the-spot’ couldn’t have been any sweeter. I just noticed the one fumble hit the opponent’s knee and sprang to get my hands on that ball. Obviously, it was tense when the game went to overtime. When I jumped on the ball that second fumble and knew that we were in field goal range already, I was ecstatic. I couldn’t wish it any better.” 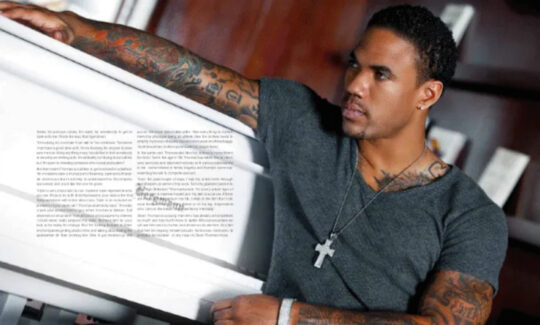 This, of course, led to the second Super Bowl of the Eli Manning Era, and sprouted a world of opportunity for young Thomas, since winning in the Big Apple for a multi-talented potential superstar can be limitless. With this sort of exposure and success, Devin Thomas would certainly test the waters in other industries and has already scratched the surface with appearances in music videos and multimedia magazines. And don’t forget about his constant showing on female interest-oriented websites and blogs.

“Oh my goodness. I felt so heroic. I felt like something out of a comic book. Like a superhero defeating the enemy. Everybody’s shit going crazy. The parade for the Super Bowl win was the best feeling in the world. It just goes to show what an amazing city this is. It’s where dreams come true,” Thomas says. “That energy made me want to experiment within other areas. I would love to get involved with the movie business, and the first thing that became available to me was the lead role in a Fantasia music video. I was excited and jumped in. Fantasia is a spectacular artist and I was amped about the experience. It was a learning process; I was surprised with the time it takes for the production. We were there all day and it only created like three and a half minutes. It was crazy to see how much effort was necessary, but I’m looking forward to getting involved in more projects. I certainly would like to consider the big screen a goal of mine. I’m pushing towards that. Film was something that always interested me. At this point, it would be a dream to get a hold of a script and be a part of something great.”

While a future on the silver screen awaits, it is his growing popularity on websites as a sex symbol that keeps his name on the web in-between downs (i.e. The YBF, Essence.com, Necole Bitchie, etc.) His professional prowess, sporting prestige and physique have put him in a hot spot in gossip joints and lady looker dot coms, making him a pillar for googily-eyed fan clubs and potential wifeys. “It’s charming and it’s very much appreciated that women find me attractive,” says Thomas. “But there is more to me than my looks. I definitely don’t want to be with somebody that thinks I’m just eye candy. I’m ready for somebody to get in tune with me. That’s the way that I get down.

“I’m looking for a woman I can talk to,” he continues. “Someone I can have a good time with. I’m not looking for anyone to pressure me into doing anything crazy. I would like to find somebody to develop something with. I’m definitely not trying to be rushed, but I’m open to meeting someone who is real and patient.” Another realm Thomas would like to get involved in is fashion. He considers style a crucial part of learning a person’s character and knows that it will help to understand his. First impressions exist, and you’ll like the one he gives. 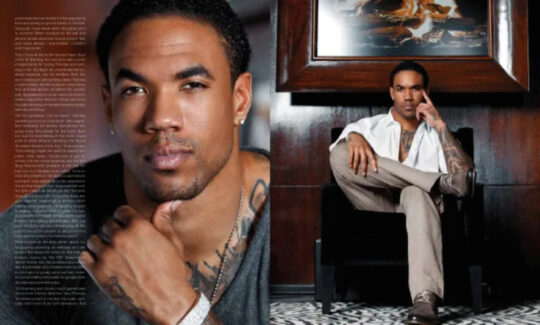 “Style is very important to me. I believe style represents who you are. It has to do with first impressions; your style is the first thing someone will notice about you. Style is an outward expression of your inner self,” Thomas adamantly says. “I’m really a ‘pick your poison’ kind of guy when it comes to fashion. It all depends on what store I run across or what piques my interest. I could never really pinpoint my style. It’s important for your look to be ready for change. And I’m looking forward to different companies getting ahold of me and talking about being the spokesman for their clothing line. I like to get cleaned up and put on the more fashionable attire. I like everything to compliment my physique, being an athlete. I like the clothes I wear to amplify my body’s features. I would never wear anything baggy; I look best when clothes accentuate my proportions.”

In the same vein, Thomas also likes his tattoos to compliment his form. Since the age of 16, Thomas has taken the art form very seriously and adorned his body with various expressions in ink – some related to family tragedy and triumph, some representing his will to compete and win. “Over the past couple of days, I had my artist come through and sharpen up some of my work. Turn my gladiator piece into HD – High Definition,” Thomas boasts. “I’m a very artistic type of person. I like to express myself, and my skin is a canvas. If there are important elements in my life, I relish in the fact that I can wear those elements on my sleeve or on my leg. It represents who I am on the inside; it represents my mentality.”

Devin Thomas is a young man who has already accomplished so much and has much more to tackle. Who knows where we will see him next, but when and where we do see him, it’s a fact that he’ll be repping himself proudly. It’s his look, it’s his ink, it’ll probably be his label – in any case, it’s Devin Thomas’ move.