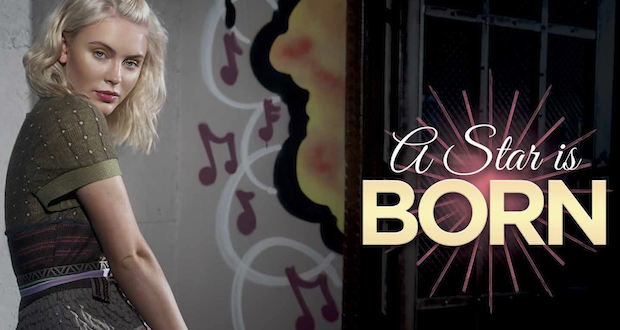 Photos by: Dale May Story by: Gina Ponce Styling: Darius Baptist
Hair and Makeup: Amanda Wilson Assistant Hair and Makeup: Michelle Delorenzo
Location: The Paper Factory Hotel (NYC)
Only a few months following her transition into adulthood, Zara Larsson already has her sights set on becoming a legend. After seeing much success on both the U.K. and U.S. charts with a few infectious pop/dance tracks, getting the chance to gain tour experience by supporting British singer Cher Lloyd, and belting out a well-received performance at this year’s SXSW festival in Texas, the 18-year-old Swedish singer is enjoying a mu- sic career that’s finally beginning to blossom in the United States amidst great response. These are the very same goals she has been pushing herself towards achieving for as long as she can remember. Now, the Scandinavian native is ready to prove what she has to offer with the release of her Stateside EP debut, Uncover.

Although, none of these accomplishments or aspirations should come as a surprise, being that Larsson made the easy decision to first step into the spotlight when she was only 10, “cause I just wanted people to see me, basically; I just wanted attention and I wanted to be a superstar.” Getting on stage to perform her best renditions of a couple of songs that belong to two true super- stars and legends themselves, Whitney Houston and Celine Dion, the striking blonde wowed the judges enough to come out victorious on the 2008 season of Talang, Sweden’s adaptation of the various Got Talent television shows.

While Larsson admits that she was “very surprised and shocked” to win, she also acknowledges that she didn’t participate for the sole reason of having fun. Simply put, she knew there was a possibility to win and that was the primary objective. She also feels it’s important to note that, even though it may be the first thing that pops up when you Google her name, it was actually an anti-climatic point in her career. 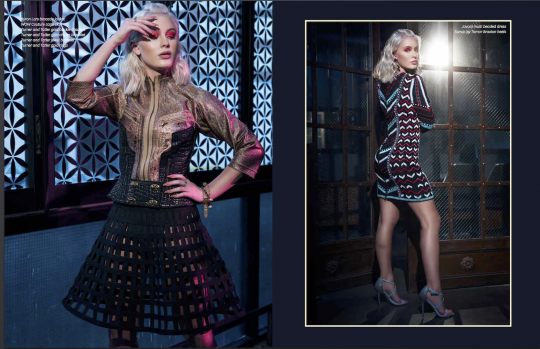 “Everything was over pretty quick,” she explains. “…and after that nothing really happened. It wasn’t a big deal in Sweden. I mean, it was a huge show, but Swedes don’t really care about anything – not celebrities. It just feels like that’s not the culture in Sweden. So, after that, I just went back to school. I did all the things I used to do before I was on the show, so my life was just back to normal.”

Fortunately, for Larsson and her fans it wouldn’t be the last time she would step out on the music scene. Looking back now, she realizes that at 10 and 11 years old it just wasn’t her timing to go any further. “I was kinda sad ‘cause I really wanted to get signed, and no one wanted to sign me ‘cause I was way too young. But I never gave up – like, that’s not an option because this is all I want to do. I don’t want to do anything else.” Determined not to back down from what she was sure was her ultimate purpose in life, even though there were many moments of disappointment that a con- tract was nowhere in sight, she continued to put herself out there throughout her pre-teen and early teenage years until a light finally began to shine at the end of the long tunnel. In 2013, when she was still a mere 14 years old, Larsson was offered a deal with Epic Records by none other than L.A. Reid. At the same time, she also found interest from Dr. Luke’s Kemosabe Records, which she is also currently signed to. 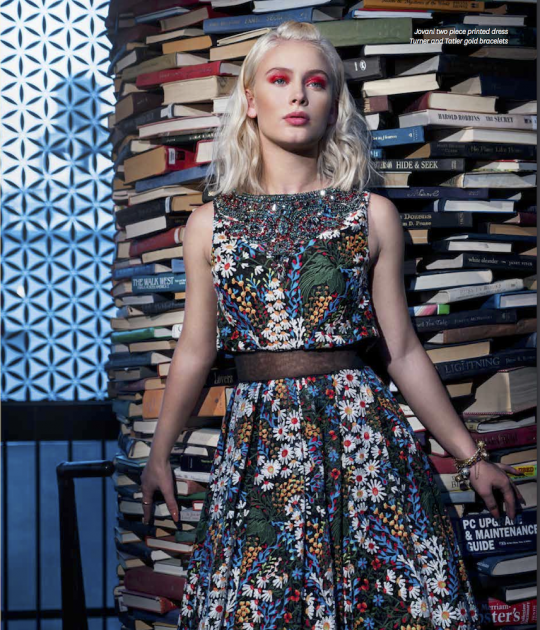 “I just wanna be a legend. I just want people to listen to me when I’m dead or to be really inspired by me and to [think] she really changed the game.”

With automatic praise in her voice when asked about working with the Epic Records mogul, she says, “LA. Reid is the best. I love him so much. I think he’s a genuine person, and he’s so talented as a musician and [in] everything he does… We haven’t actually worked a lot [together]; he’s not in the studio working with me, but he’s very involved and he loves to hear what I come up with. He loves to give me feedback, and he cares. That means a lot, especially from him ‘cause I know how many great things he has done. So, to work with him is just a great honor.”

Having had the opportunity to work with some of the most successful and knowledgeable names in music combined with the simple act of growing up, there is a lot that Larsson can reflect back on now from when her career was just starting out. Because of this, she has not only evolved to find her voice in song, but also in the way she stands up for how she wants herself and her music to be represented. 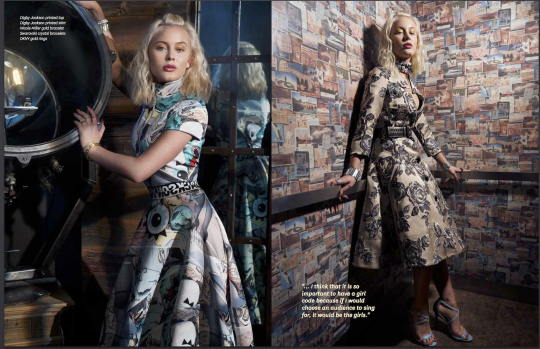 A strong commitment to what she believes in is the main message she says fans will have to look forward to in her upcoming song choices and music releases. Explaining that she is no longer willing to compromise for anyone, the Stockholm-born songstress discloses, “Back in the day I might have been afraid of telling people what I didn’t like ‘cause I thought that I was gonna hurt their feelings, or I thought that I was gonna make them look bad, but the only person I made look bad was myself for not loving the song… I won’t listen to someone telling me this is a good song; if I don’t think it’s a good song, I’m not gonna sing it. I don’t know how I’ve developed or how different my sound [has become], but let’s just say [I’m] more true to myself… At the end of the day, I’m the person who’s going to sing the songs, and I want it to be from my perspective.”

Her unwillingness to compromise is further depicted as she goes on to reveal the sense of responsibility she feels for lifting women up rather than pitting herself against another. “I would definitely say that I’m trying to have a girl code in [my music]. I had this amazing song that I wrote with MNEK…and it’s a really good one, but the lyrics are not something I could stand for… I think that it is so important to have a girl code because if I would choose an audience to sing for, it would be the girls. Honestly, the girls are the number one group I care about… When it comes to women and empowering other women, I am super down for that. I hope that people get that I’m, like, the biggest feminist on Earth, and low key I try to have a really strong girl code.” 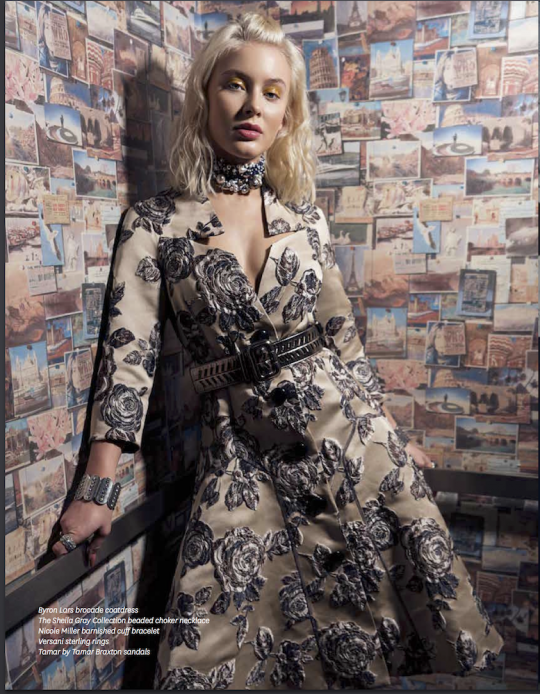 Luckily, there has been plenty of music that Larsson has felt good enough about to let leave the studio, including the catchy summer anthem “Lush Life,” the joint effort with Tinie Tempah, “Girls Like,” and another collaboration with British singer/songwriter and producer MNEK. The latter partnership resulting in hit dance single “Never Forget You,” which has taken European and Scandinavian countries by storm and has steadily been climbing the charts in the U.S. as well. Though the singer has found inspiration in many things, such as dance, Beyonce, blogs,and Twitter, when it comes to creating concepts for her own records, Larsson makes a concerted effort to stay true to her own out- look and experiences relating to life and love, which a good deal of her lyrics are based on.

“…I think that it is so important to have a girl code because if I would choose an audience to sing for, it would be the girls.”

“Songs are so universal and so relatable to everyone, but when you actually experience something, it just takes everything to another level. And when you have your first heart- break, it kinda changes you and it changes the way you look at things, or even [the way you] think about life itself. I’m such a philosopher. I love to think [profound] things; like, what is my purpose here, or is my existence valuable? When it comes down to inspiration, I think it’s definitely my life. Like, what’s going on in my life right now? What do I want to sing about? When it comes from you, I think it makes it authentic.”

Almost a decade after being recognized for her musical prowess on a televised talent show in her native country, Larsson can at last feel some relief that all her dreams seem to be turning into a reality. On the fast track to be- coming a household name with over a million Instagram followers already, she is putting the finishing touches on her first full-length album right now, due out in June. Teaming up with fellow Swede and producer genius,, Larsson promises this LP to be full of good songs.

So, with no lack of self-confidence or indication that she’ll be slowing down any time soon, Larsson reiterates her number one goal – “I just wanna be a legend. I just want people to listen to me when I’m dead or to be really inspired by me and to [think] she really changed the game. I don’t know how I’m supposed to do that yet, but I’ll figure something out. “